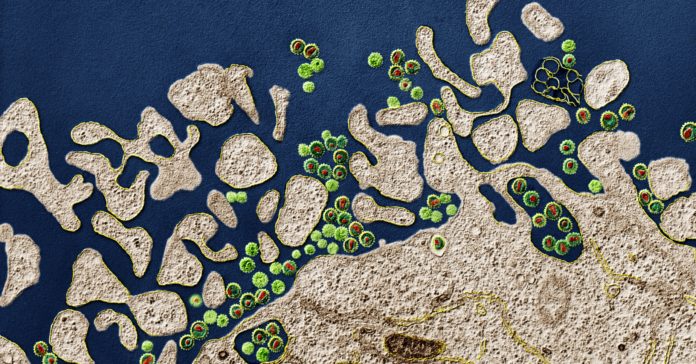 In the three and a half decades since HIV/AIDS was discovered, the deadly disease has killed 35 million people. While drugs now allow patients to live long lives with the virus, only one man, an American named Timothy Ray Brown, otherwise known as the “Berlin patient,” is believed to have been cured. Now, it appears he’s no longer alone.

This week, a team of British scientists from the University of Cambridge claimed to have successfully treated an HIV-positive man from London with the same stem-cell technique that Brown’s doctors used a decade ago. It involved transplanting the patient with bone marrow from a donor who had a naturally occurring mutation in a gene called CCR5. HIV uses the CCR5 protein to invade certain immune cells. Without it, the virus is locked out.

It’s the very same mutation that a Chinese researcher named He Jiankui tried to replicate last year by using the Crispr technique on at least two human babies. While the international science community condemned He’s experiment for a host of ethics violations, using Crispr and other gene-editing tools to recreate the protective effects of the CCR5 mutation might lead to treatments so widely available that we don’t have to refer to patients as the London this or the Berlin that any more. They’ll just get … treatments.

The scientists report that their “London patient” has been free and clear of the virus for 18 months. That’s still too early to call it a cure—the researchers prefer to say he’s in long-term remission—but he appears to be only the second person ever reported to have been rid of the virus using this method. The results are described in a paper published Tuesday in the journal Nature.

While some experts are applauding the news as proof that the Berlin patient wasn’t just a fluke, others are less convinced that this particular method has much relevance for the majority of HIV/AIDS patients. Stem cell transplants are painful, risky procedures, often only proposed for the sickest of patients. The only reason they were attempted in the case of the Berlin and now the London patient is because in both cases the men also had a life-threatening cancer. It’s hard enough to find tissue-matched donors for many people, let alone locate one that also has the rare CCR5 mutation, which occurs in only 1 percent of European populations. It’s close to the boutique-iest treatment you can think of. As Anthony Fauci, director of the National Institute of Allergy and Infectious Diseases, put it to The New York Times: “It was done with Timothy Ray Brown, and now here’s another case—OK, so now what? Now where do we go with it?”

One tantalizing possibility that is already the subject of much investment is using genetic engineering to recreate the same conditions as a transplant without as much of the risk and discomfort.

“There’s a nice menu of things that we could possibly do now,” says Paula Cannon, a molecular microbiologist who studies HIV at the University of Southern California’s Keck School of Medicine. She says the latest data, combined with Brown’s now 10-year remission, suggests that any path to a cure for HIV/AIDS goes straight through CCR5. “What these two patients have shown us is that attacking the reservoir of infected cells while at the same time providing shiny, new HIV-resistant immune cells can result in a cure.” It’s kind of a push-and-pull strategy; one part defense, one part offense.

Researchers and drug companies are already actively pursuing this approach, most notably California-based Sangamo, which is currently testing two HIV gene therapies in human trials. More than a decade ago, the company began using an older gene-editing tool called a zinc-finger-nuclease to knock out the CCR5 gene on a patient’s immune cells. Without it, HIV can’t infect those cells and is only be able to kill the non-engineered ones. In a way, the virus actually selects for its own demise, burning through vulnerable cells and leaving only the ones that can fight back. Scientists in the US and China have also explored similar treatments using Crispr, but so far only in mice and human cell lines. One potential advantage of Crispr is that it’s easier to make multiple edits. So in addition to knocking out CCR5, you could also supercharge those immune cells to be better able to find and destroy the virus. Some of the most promising new cancer treatments today rely on exactly that approach.

But even if today’s report provides the most compelling evidence yet that crippling CCR5 could lead to a cure for HIV, researchers like Cannon believe it would still be inappropriate to make such an edit in a human embryo. “I’m still so angry about those Crispr babies,” says Cannon, referring to Lulu and Nana, a pair of girls who in November were reported to have been born in China with changes to their CCR5 gene intended to give them immunity to HIV. “It was a very cynical ploy to take the lowest hanging fruit for the technology and make a huge leap to editing an embryo with a completely unnecessary enhancement.”

Crispr, for all the hype surrounding it, is better at cutting genes away than adding them in. And there just aren’t that many diseases where the fix is a piece of scarred up, dysfunctional DNA. But HIV/AIDS is an exception because a broken CCR5 gene provides such strong protection from the virus. Still, that doesn’t mean it’s ethical to edit the genome of a healthy, unborn child, with all the unknown risks that entails. That person has many ways to avoid getting HIV that don’t involve permanent alteration of their DNA. Particularly when you consider that in 15 to 20 years, a cure might well exist. And it might even arrive as a mutant form of a gene called CCR5.

GizmoCrazed - November 23, 2018 0
It took all of 14 minutes for the Soundbrenner Core to hit full funding. Not too shabby. Last week, the wearable maker closed out...

Google AI listens to 15 years of sea-bottom recordings for hidden...