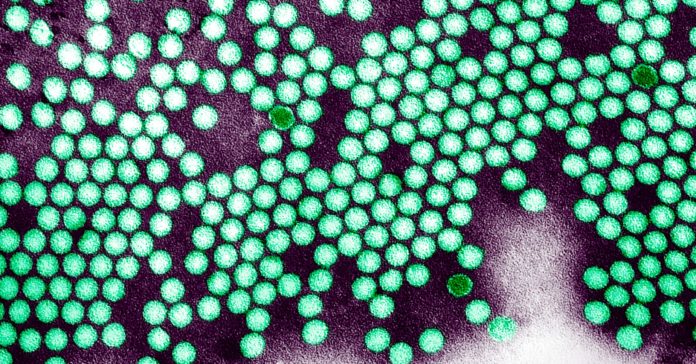 In 1979, a photographer named Janet Parker got a disease that wasn’t supposed to exist anymore. At first she thought she had the flu, but then she kept getting sicker, got a rash, and went to the hospital, where doctors—in disbelief—diagnosed her with smallpox. Just a year earlier, the World Health Organization had declared that “mankind probably had seen its last case of smallpox,” according to The New York Times. That should have been true. But in a Birmingham University lab below Parker’s darkroom, a scientist had been working furiously to finish up his viral research, before officials clamped down on the number of facilities studying the nearly dead disease. The scientist wasn’t obeying safety protocols, and the virus escaped through a duct, killing Parker.

Smallpox is the only human disease that humans have ever eradicated. But as the above story shows, “eradication” is not as simple as a dictionary definition would lead a person to believe. There’s the trouble of vaccinating people, which involves international collaboration, money, and will—plus overcoming conflict, culture, and geographic obstacles. Then there’s keeping track of and quelling outbreaks. And finally, there’s the trouble of finding and containing every single sample of a virus that exists, as failed to happen in 1979.

Right now, officials are working on that problem for a different almost-gone disease: polio. So far this year, there have been six known cases of polio infection, in Afghanistan and Pakistan—two of the three countries left in the world where polio remains. That’s a dramatic drop from 1988, when the virus struck 350,000 people and the World Health Assembly resolved to banish the infectious disease, to which children are most susceptible, from the entire planet by the year 2000. The worldwide eradication campaign has come tantalizingly close to wiping the disease off the planet, but tricky scientific questions stand between few cases and absolute zero.

You can’t just look at infection numbers and declare victory. You also have to ensure the virus exists only in dedicated labs with obsessively strict safety protocols, and purge it from every other scientific and medical facility that might, maybe, harbor particles of the deadly infection. Such labs are numerous. In the US, an initial survey in 2002 found that 56 stateside facilities had “potentially infectious materials,” while 37 more had both those “maybe” samples along with “definitely infectious” ones. Sometimes, these labs don’t know that this agent of death and paralysis lurks in their freezers. In the worst-case scenario, a mishap at one of these labs could imperil lives and undo decades of grueling public health work.

Polio’s onset feels like nothing, or like the flu, and some kids pull through without lasting effects. But one in 200 cases ends in paralysis, and 5 to 10 percent of those instances end in death, when breathing muscles seize up. In the US, we don’t think about polio much, because we don’t have to: Vaccines effectively wiped it out here in 1979. After the Global Polio Eradication Initiative formed, in 1988, cases worldwide dropped by 99 percent, down to just 29 in 2018. “Without our polio eradication efforts, more than 17 million people who are currently healthy would have been paralyzed by the virus,” says Steve Wassilak, of the Centers for Disease Control and Prevention’s Center for Global Health.

The original turn-of-the-century deadline may have passed without total annihilation, but in 2015 a global commission did declare the Type 2 virus (there are three flavors) eradicated. After that, officials started phasing out the vaccine with live versions of that strain, which can itself cause outbreaks in certain circumstances.

Today, helping ferret out where else Type 2 might be hiding is the job of Anna Llewellyn, a Global Poliovirus Containment Officer at the CDC. With this strain of polio extinct in the wild, and remaining outbreaks (those not caused by vaccines) only of Type 1 and 3, live virus remains in only a few places. It’s under the roofs of vaccine manufacturers, inside labs that do polio research, within individuals who have chronic infections, and—most importantly—in facilities that aren’t aware the virus lurks in their frozen samples. “Labs don’t know they have polio materials because they are collecting and testing for other viruses or parasites or bacteria,” says Mark Pallansch, director of the CDC’s Division of Viral Diseases.

If these labs took fecal, respiratory, or sewage samples from places where polio circulated, they might accidentally have poliovirus on their hands. And if they either don’t have safety protocols up to snuff for such a dangerous disease, or aren’t following their own protocols, a viral escape could happen. Mistakes of this sort are not unheard of: A 2018 Guardian article, for instance, revealed that Bristol University scientists accidentally sent live dengue virus in the mail, “because the person who packed the material had no idea it contained live dengue.” That, the investigation said, was just one among more than 40 lab “mishaps” the UK’s Health and Safety Executive looked into between 2015 and 2017.

To uncover those “potentially infectious materials,” the Global Polio Eradication Initiative hosts a big table that lists the dates and locations of wild poliovirus outbreaks, and the times each country did live-virus vaccinations, so labs around the world can scan the database and see whether their samples might have originated in a polio-prone area. “Every country has either completed or is in the process of completing these surveys,” says Lllewellyn.

Some labs, which might have unwittingly collected poliovirus, initially find the process invasive, but containing an infectious agent is kind of an uncontroversial goal. “No one wants to be that guy who lets polio back into the world,” she says. “No one wants paralyzed children.”

Still, it’s a new process, and not easy. “Containment in general, and this part in particular, is a ship that’s being sailed as we’re building it,” she continues. When researchers find potentially infectious samples, they face three options: Lab can destroy them, send them to another lab that will contain them, or become what the World Health Organization calls a “poliovirus-essential facility,” which is allowed to possess the virus. Some labs need to keep polio on hand so they can keep producing vaccines, and to perform diagnostics.

The fewer such spots, though, the better. “Anywhere there is still live virus, there is still a risk it might get out of those specific facilities,” says Pallansch. Pallansch’s colleague Steve Oberste runs a CDC lab that is one of 78 would-be essential facilities in 26 countries. His was the second center worldwide to jump through the first hoop that a global commission set forth: getting a certificate of participation. Then comes the “interim” certification, and then, finally, the real deal.

No one has gotten that yet—in part because it’s a capital-p Process. A document called Global Action Plan III lays out the necessary safeguards labs must take, which include some you might expect (and pages and pages more that you can read yourself): Keep the Type 2 virus locked and with limited access. Give access to inventory records only to those who need it. Keep Type 2 totally separate from the other types. Know what you’d do if the worst—decontainment—happened. Hire a “biorisk” manager. “There’s a lot of pieces like that,” says Oberste, “where you have to be prepared to step up beyond what a lab would do—even beyond what a good lab would do.”

But right now, when polio is finally almost totally gone, is the most important time to keep the few remaining agents of death on lockdown. “We’re getting close to realizing eradication, which is a really rare moment in the spectrum of humanity, to say we’re able to wipe off the face of the earth something that has caused so much suffering,” says Llewellyn. “The closer we get, the more devastating a release would be.”

Lockdown, though, feels imminent. “2019: the year of containment,” she says. “You heard it here first.”