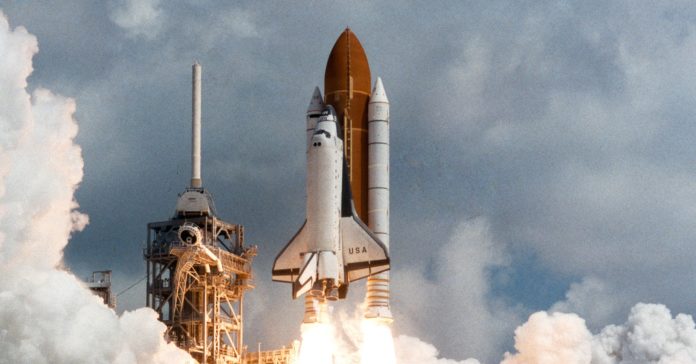 In 2011, the storied space shuttle flew for the last time. Three spacecraft survive in retirement as specimens in museums around the country. But the program isn’t dead yet: Many of its parts are popping up as zombie components in spacecraft now in development.

Now yet more shuttle hardware is getting ready to fly again, also within Boeing’s empire. A Space Act Agreement signed in 2018 shows that the aerospace company wants to include a handful of the shuttle’s smaller orbital maneuvering engines in a secret Department of Defense project. Known as the R40b, the engine was originally developed to allow shuttles to adjust their speed and direction while in orbit, helping the iconic spacecraft to deploy the Hubble Telescope and parts of the International Space Station.

Under the $818,000 agreement, NASA will select eight engines that are currently mothballed at its White Sands Test Facility, in New Mexico. The agency will clean up, inspect, and test-fire them to identify the best four, before handing them over to Boeing for “return to service” in an unnamed DOD program.

The NASA agreement was signed in September by an engineer at Boeing’s facility in El Segundo, California. According to the Los Angeles Times, development work for Darpa’s Phantom Express is being carried out there. Phantom Express is an uncrewed, reusable spaceplane that will take off vertically to deploy small satellites or other spacecraft, then glide back down to land horizontally, like the shuttle.

The shuttle, which cost around $450 million per mission, was supposed to fly once a month but never got close to its goal. Darpa hopes the Phantom Express will be faster on its feet, able to launch, land, and launch again in as little as a day, with a price tag of just $5 million per flight. That would be a fraction of the cost of today’s SpaceX launches, though that company is also aiming to turn around its reusable rockets in about a day, which is expected to then shrink its price tag.

Unlike their larger brethren, though, the latest shuttle engines to be resurrected may not be destined for the Phantom Express. El Segundo is also where Boeing builds most of its satellites, and the small engines could be used to boost large military satellites into geostationary orbits. NASA and Boeing both declined to comment on the reuse of the R40b engines.

Despite the space industry’s cutting-edge image, reusing and repurposing decades-old equipment is a popular practice. Hardware that has been successfully flight-proven is often preferred over something newer but riskier. Stratolaunch, a company that’s building the world’s largest aircraft, which it hopes to use to launch rockets from midair, is cutting costs by cribbing its engines, actuators, and even analog cockpit instruments from Boeing 747s. And in the mid-2000s, a startup called Excalibur Almaz bought a capsule that had flown to secret Russian military space stations during the Cold War. The company planned to use the spacecraft for tourist flights around the moon, although it ran out of money long before it was ready to launch.

Before the three surviving shuttles were sent to their final resting places at museums, NASA instructed technicians to strip them of thousands of important components. Some parts, like the shuttle’s windows, were saved so they could be used to study the stresses imposed by repeated launches and by micro-meteoroid impacts while in orbit. Other systems, including the airlocks, were set aside for potential reuse in future spacecraft.

But if reusing shuttle parts is meant as a thrifty design choice, that approach hasn’t always led to cheaper aerospace projects. NASA now expects the SLS to cost double its original budget and to arrive nearly three years late.

The engines in question also aren’t particularly rare. Boeing could opt to buy almost identical brand-new engines from their current manufacturer, Aerojet Rocketdyne. The R40b continues to be a common choice for satellites and was once even proposed to power a scientific mission to Uranus. Although old rockets generally store very well, and the design of the R40b has changed little since it was first built in the 1970s, deterioration is always a concern.

A more plausible explanation, according to a senior space industry executive who asked to remain anonymous, is that it protects Boeing’s position as the US government’s preferred contractor. At the end of the shuttle program, Boeing acquired the designs and specifications for its engines and other parts. “If Boeing uses its old hardware, then it can charge whatever it wants, because Boeing is the only contractor qualified to work on them,” the executive says.

In other words, it’s in Boeing’s interest to keep the space shuttle’s hardware, first designed in the 1970s, alive for as long as possible. But that means that when the SLS finally launches, it could end up being piloted by someone younger than the engines beneath it.

GizmoCrazed - November 18, 2011 1
If you are still having battery issues on your iPhone 4S, here is some good news for you. As we know that the battery problem...

Space Photos of the Week: Juno Snatches a Shot of Jupiter's...

The Jolt is a $500 electric bike for the masses