Want to star in your favorite memes and movie scenes? Upload a selfie to Morphin, choose your favorite GIF and your face is grafted in to create a personalized copy you can share anywhere. Become Tony Stark as he suits up like Iron Man. Drop the mic like Obama, dance like Drake or slap your mug on Fortnite characters.

“We believe in the future you’ll be able to be the main character in your own film. Imagine a super hero movie where you’re the main protagonist?,” co-founder Loic Ledoux asks. “That sounded like science fiction a few years ago and now with AI and computer vision we definitely see our tech going there.”

Ledoux also wants to reclaim faceswaps as something fun rather than a weapon for misinformation. “Deepfakes brought something pretty negative to computer vision. But it’s not all bad. It’s about how you use the tech to give people a new tool for self expressions and storytelling.” And since Morphin re-generates the whole clip from scratch with CGI animation, they look right at a glance, but clearly aren’t manipulated copies of the original video designed to fool anyone.

Morphin started three years ago with the intention to build personalized avatars for games and VR so you could be a FIFA soccer player or Skyrim knight. Ledoux had started a 3D printing company to explore opportunities in scanning and modeling when he saw a chance to connect your real and virtual faces. He teamed up with his co-founder Nicholas Heriveaux, who’d spent 13 years working on 3D tech while modding games like Grand Theft Auto to insert his avatar and assets.

What they quickly recognized was that “People were just reacting to themselves on the screen,” ignoring the gameplay, Ledoux recalls. “Being able to see yourself as a hero was the underlying sentiment, so we focused on video completely.” Recognizable GIFs became its preferred medium, as they combine familiarity and the ability to convey complex emotions with a template that’s easy to personalize so they stand out. 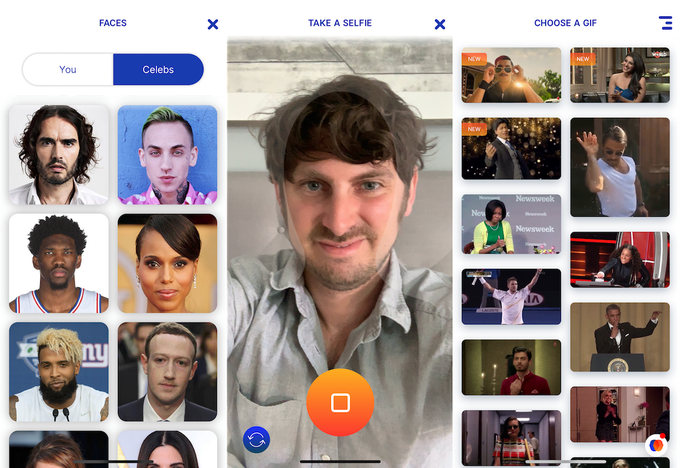 Morphin’s tech no longer requires 3D scanning hardware and it works with just a regular selfie. You just snap a headshot, select a GIF from its iOS or Android app’s library and a few seconds later you have a CGI version of yourself in the scene (with no watermark) that you can export and post. “We wanted it to be super straightforward because we wanted people to relate to the content,” Ledoux notes. Over 1 million scenes have been created by 50,000 beta users, and each time a celebrity shares one of the GIFs Morphin has been sending them for marketing, scores of their followers demand to know which app they were using.

Morphin’s nine-person French team will have to keep innovating to stay ahead of avatar-making competitors like the ubiquitous Snapchat Bitmoji, Genies, Moji Edit and Mirror AI. Facebook, Microsoft and Google all have launched or are building their own avatar creators. But these typically live as 2D stickers or 3D AR animations you overlay on the real world. By using GIFs as a canvas, Morphin takes the pressure off your visage looking perfect and instead emphasizes the message you’re trying to get across.

The challenge will be for Morphin to become a consistent part of people’s communication stack. It’s easy to imagine playing with it and posting a few GIFs. But iconic new GIFs don’t emerge each day and without a social network to stay for, Morphin is at risk of becoming merely a forgotten tool. The app might need TikTok-style challenges like submitting the best personalized GIF to match a prompt or a GIF browsing feed to keep people coming back.

Morphin isn’t racing to monetize yet, but sees a chance to sell longer premium video scenes à la carte or as an unlimited subscription. Ledoux eventually hopes to unlock new forms of storytelling beyond existing GIFs. There’s also a chance for Morphin to highlight sponsored clips from upcoming movies or TV shows. “In the long-term we’re more interested in the analogy of Lil Miquela and how people are interacting with digital characters,” Ledoux explains, citing a virtual pop star whose developer Brud recently raised at a $125 million valuation.

One of the most exciting things about Morphin is that it will allow people to take the spotlight no matter how they look. Often times certain races, genders and looks are unfairly excluded from starring in today’s most popular media. But Morphin could let the underrepresented take their rightful place as stars of the screen.

Your faithful author Josh Constine dropping the mic like Obama