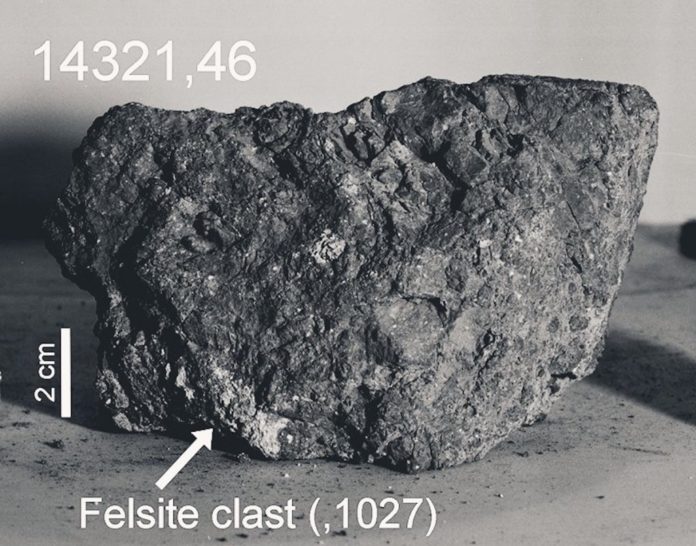 One section of this Moon rock (arrow) has a strangely Earthlike composition–most likely because it started out here before being blasted to the Moon by an asteroid impact 4 billion years ago. That would make it the oldest known intact sample of our planet. (Credit: NASA/USRA)

It has been a great week for humans banging on things around the solar system. Japan’s Hayabusa2 probe touched down and grabbed a sample of asteroid Ryugu; NASA’s InSight is hammering into the surface of Mars; and a private Israeli spacecraft named Beresheet is heading toward an April landing on the Moon. But we are just beginners at the game. Nature has been banging and moving things around in the solar system for billions of years–and doing it with impressive efficiency.

Case in point: a rock nicknamed Big Bertha, and officially known as NASA catalog #14321. It was collected during the Apollo 14 mission by astronaut Alan Shepard, who picked it out because it contained an unusual-looking fragment. His instincts were spot-on. That chunk of Big Bertha really isn’t like the surrounding Moon rocks, most likely because it did not originate there. According to a study by David Kring of the Lunar and Planetary Institute and his colleagues, the fragment actually started out on Earth.

This is the first clear example of terrestrial material traveling to another world–and more evidence of the interplanetary highway running through the solar system.

If you’ve been following the recent science news, you may already know how the story goes. The fragment probably started out as a chunk of rock that crystallized about 20 kilometers beneath the surface of the young Earth. Sometime between 4.0 and 4.1 billion years ago it was blasted into space by an enormous asteroid impact, eventually landing on the Moon.

Then around 3.9 billion years ago it was heated and buried by another impact, this one striking the lunar surface. Fast forward to 26 million years ago, when yet another impact excavated the rock and left it back up top on the Moon’s surface, where Shepard discovered it on February 6, 1971. The unusual, quartz-rich composition of the rock are a strong indication of its terrestrial source. Planetary scientists know of 360 meteorites on Earth that originated on the Moon, but this is the first Moon rock convincingly traced back to an origin on Earth.

Kring’s discovery builds on one of the most profound discoveries of the space age: the recognition that the solar system is geologically dynamic on an interplanetary scale, with material coursing from world to world.

It’s no secret that this interplanetary highway was active in the early solar system. The pockmarked face of the Moon records an extensive history of impacts there (although right up to the time of the Apollo landings there were still a few holdouts who claimed that most lunar craters were volcanic in origin). Scientists also understood that the cratering process continues to this day, but nevertheless were startled to see the abundance of fresh impacts that have shown up in images from the Lunar Reconnaissance Orbiter, which has been surveying the lunar surface since 2009.

Telescopic networks now monitor the Moon for flashes of light that occur when a small asteroid strikes, offering another measure of the level of activity. In just 89 hours of observing time, the European NELIOTA project has observed 57 lunar impact flashes. Meteorite impacts on the Moon churn the surface far more extensively than scientists had anticipated. Neil Armstrong’s iconic footprints will be completely erased by meteorite “weathering” in just a few tens of thousands of years–far from the millions or billions of years that many researchers imagined at the time.

Asteroid and comet impacts on other worlds turn out to be more common than expected as well.  A dramatic example occurred in the summer of 1994, when Comet Shoemaker-Levy 9 smacked into Jupiter. Since then, amateurs have noticed a number of other flashes on Jupiter, most like the result of collisions with other small comets. A recent study suggests that Jupiter get smacked by a Chelyabinsk-scale impact about once a week!

Large impacts are far more rare, but when they strike rocky worlds they toss out material that joins the interplanetary highway. That is how those 300-plus lunar rocks ended up on Earth, and that is how Big Bertha ended up on the Moon. Another 227 meteorites on Earth have been traced back to Mars. Nobody has positively identified a Venus meteorite yet, but some of them surely exist. One Earth rock has even been tentatively identified as a piece of planet Mercury. 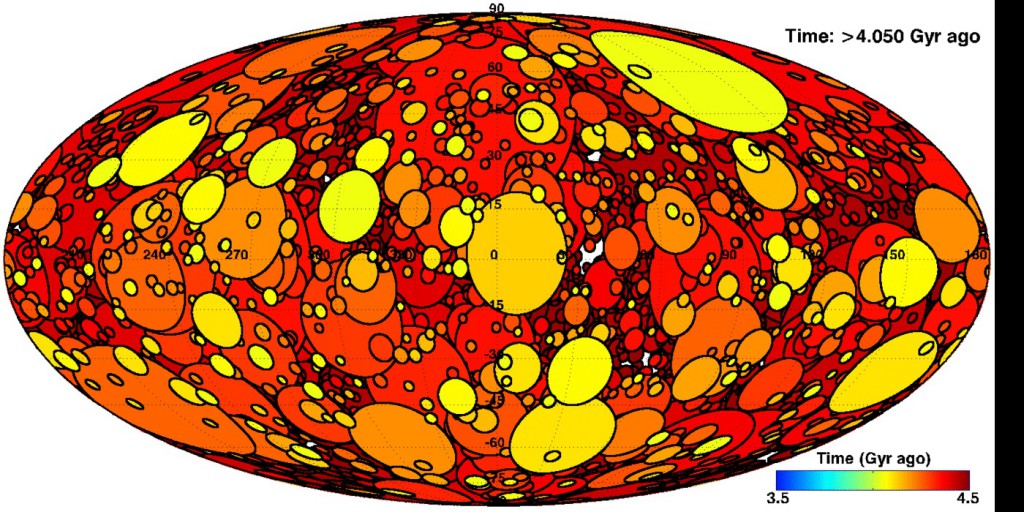 Impact craters completely churned Earth’s early surface. That’s probably how an Earth rock ended up on the Moon; it’s how Earth life might have ended up on other worlds as well. (Credit: Simone Marchi et al)

Earth rocks have certainly landed on all of those nearby worlds. Note, too, that traffic along the interplanetary highway was much heavier in the early solar system, when impacts were far more common. Many researchers have speculated that life might have originated first on Mars, then traveled to Earth aboard a spray of Martian meteorites, seeding life on our planet. It could have gone the other way, with Earth seeding Mars. That’s a major reason why it would be so fascinating to find life on Mars: Is it totally different than terrestrial life, or do both seem to share a common origin?

The story doesn’t stop with Earth and Mars. Earth rocks undoubtedly bombarded Venus as well, and Venus may have been a habitable ocean world for the first couple billion years of its existence. Perhaps it, too, was once a living planet. Perhaps some hardly remnants of life still exist in its clouds; it’s worth taking a look. Far-flung Earth rocks may also provide the most direct evidence of what our planet was like at the time life appeared here.

Big Bertha appears to contain the oldest intact Earth rock ever found. Material from the surface of the Moon (including what’s sitting in the NASA archive from the Apollo missions) may include many other specimens of Earth from around 4 billion years ago. They could reveal the composition of the ancient atmosphere, the structure of the first continental crust, possibly even chemical clues about the primordial organisms on this planet.

And while I’m thinking big, I’ll go even bigger. Interplanetary highways should be a generic feature of all planetary systems that have multiple rocky worlds. In some cases, the transport system will be much more efficient than it is here. That’s true especially for systems around red dwarf stars, which tend to have small, tightly spaced planets. The Trappist-1 system–containing seven known planets, all roughly Earthlike in size–is an extreme case in point.

Two of the Trappist-1 worlds are considered potentially habitable. If life arose on one of those worlds, it would quickly and efficiently spread to the other. The same is true in any such compact planetary system, and there’s no reason to think that Trappist-1 is unique. In this limited sense, at least panspermia (the hypothesis that life can survive in space and spread from world to world) may be real in many places throughout the universe.

The highway that brought Big Bertha to the Moon could therefore lead us to a more expansive view of planetary systems as dynamic incubators, scattering life around wherever it appears.