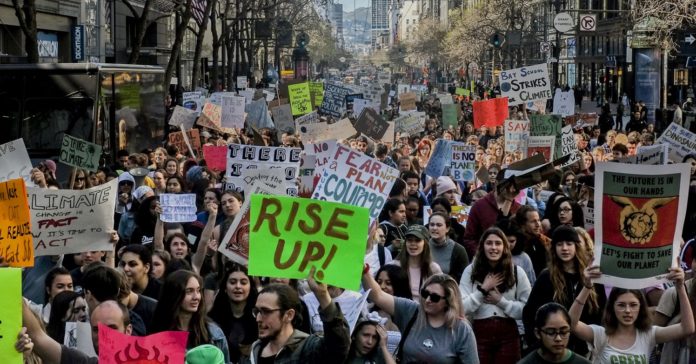 The kids are not messing around. Across the planet today, in 100 countries and every state in the US, thousands upon thousands of children skipped school and took to the streets with a message for the adults: Save the world you broke.

The walkout was one of the biggest protests against climate change ever organized. And the organizers were children, inspired by Swedish climate activist and teenager Greta Thunberg, and led in the US by three young women: 13-year-old Alexandria Villasenor of New York City, 16-year-old Isra Hirsi of Minnesota, and 12-year-old Haven Coleman of Denver, Colorado. These are the kids who stand to inherit a scorched Earth. They want a world that won’t eat them alive, that won’t boil their oceans and destroy their crops. They want a future; if they have to miss class to get the adults to listen, they will.

“My GPA isn’t going to matter if I’m dead,” said an Oakland high-schooler named Bruke, 16, who’d crossed the bay to strike in front of Speaker of the House Nancy Pelosi’s office in San Francisco along with at least 1,000 other kids—ranging in age from toddlers with their parents to 18-year-olds. A member of the Youth vs. Apocalypse group that confronted California senator Dianne Feinstein last month, Bruke and his friends want Pelosi to cosponsor the Green New Deal resolution introduced to the House by Representative Alexandria Ocasio-Cortez of New York. Most of all, they want to join voices with the youth around the world to raise awareness that climate change is real and can’t be ignored. “We only have 11 years until climate change is irreversible,” Bruke added. “I’ll be 27 then. I want to be getting a master’s in sociology then, worrying about my education, not survival.”

The San Francisco strike was organized by another member of Youth vs. Apocalypse, 15-year-old high school sophomore Nadja Goldberg. She and her team have had to squeeze protest planning into their already full school schedules. “It’s insane. I’ve gone a few nights with not a lot of sleep. Right now it feels like climate activism is my main goal, and school is this hurdle to get over in the process of doing that,” she says.

During late-night video meetings, Goldberg and her friends have planned the event to the last detail, calling Pelosi’s office to let her staff know they’d be chanting outside her office and alerting the police that they would be taking the streets without a permit, in the grand tradition of peaceful civic action in San Francisco. They attended training sessions for how to handle worst-case scenarios. They gathered the numbers for lawyers in case things got out of hand.

But they didn’t get out of hand. With signs aloft, Goldberg and her fellow students took over San Francisco’s main downtown thoroughfare, Market Street, and walked while banging on drums and leading chants. “Walk slow, walk safe, walk powerfully,” 15-year-old Hannah yelled into a microphone at the front of the crowd. The police did arrive, but only to keep the kids safe. Adult advocates watched on the sidelines—teachers came with their fourth-grade students, parents escorted their kids who were too young to take public transit alone. Members of the nonprofit climate activist group Sunrise Movement wore yellow vests, helped direct traffic, and observed the students, but didn’t take the lead.

At strikes elsewhere in the US and the globe, the adults were there to listen, not speak. What they heard from the kids was the repeated warning that if climate change isn’t reversed by 2030, there’s no turning back. Early Friday, before New York City’s strike began, organizer Villasenor addressed the UN, telling the assembled world leaders: “Today, you are hearing from children all over the world as we strike for our futures. We are telling you we are trapped, and the time has come for you to turn the furnace off and save us all.”

Joining her in New York was a 9-year-old named Zayne, who despite his small stature has become one of the loudest voices for change. “Climate change is a thing that adults made that they have to fix,” he said. Zayne worries constantly that he might die in the next 20 or 30 years. “I might be killed in a tornado or something. It’s getting so hot. I might be killed in a flood, a tornado, or tsunami. I think about it all the time.”

That worry has brought Zayne out to the steps of City Hall in New York most Friday afternoons since December; today is his 13th strike. This time, he was far from alone.; hundreds of people joined him. At one point around lunchtime, some students even ordered a pizza to the middle of the protest. The pizza delivery person, with just two boxes, struggled to find the kids who’d ordered it. Far more boxes of pizza were needed to feed everyone.

Throughout the day, Thunberg, the 16-year-old who kicked off the movement, amplified strikes around the world on her social media feeds. From Croatia to Canada, Chile to Bangladesh, and all the way to the southern tip of Africa, the youth followed her lead in more than 2,000 separate strikes.

In Austin, some 70 to 80 people gathered on a sloping knoll at the southwest corner of the Texas Capitol grounds. The protestors, a mix of students, adults, and various activists, bundled up against a cold front that had blown in earlier, holding homemade signs bearing messages like “There is no planet B” and “The climate is changing. Why aren’t we?”

An organizer passed around a megaphone to people who wanted to speak out, and roughly a dozen students asked to share their stories. Their speeches were filled with frustration, fear, and passion, a heady mix that is familiar to anyone who’s been a teenager. Or, as one Westlake High School student named Kate aptly put it: “As a teenager, it already feels like the world is kinda falling apart. But that doesn’t mean it actually has to.”

The enormity of a problem as vast and entrenched as climate change was not lost on the students. “I remember being told by adults we’d be the generation to fix [the climate change problem],” Kate said. “But what are we supposed to do?”

Another vented her frustration toward the lawmakers in their government offices just a few hundred yards away. “We’re here because we’re scared,” said 16-year-old Sasha, a student at Headwaters School in downtown Austin. “But we’re also here because we’ve been gifted with a righteous anger.” Her voice swelled as she continued. “We’ve been told we’re too young to make a change,” Sasha said. “We’re here to tell our legislators we will no longer be subject to their gaslighting.”

An elementary student named Henry asked to speak, admitting he had no prepared remarks: “I’m barely even in 5th grade, but if I have to come up here and tell people to change, we have a pretty messed-up economy.”

In San Francisco, a woman with gray hair stood watching the students march down Market Street. She was crying. “Thank God for them,” she said, telling WIRED she didn’t want to share her name because this was a day about the youth, not about her. “They’ll save us.”

“We’re the ones who are going to experience this, the worst of all this,” said 14-year-old Drake, an eighth grader from Marin County in California. He’d taken the bus with four friends to join the San Francisco protest. “The adults aren’t going to see this. So we have to speak up.” As he and his friends waited for the march to start, they worried about their essay due next week, and texted their parents to let them know they were OK.

Safety—long term—is what the kids want most. They understand the stakes of climate change, and they want the adults in power to hear them when they demand a better world. It was perhaps 10-year old Beckham, who came to the San Francisco protest with his mother, who put it best: “Just ’cause we’re kids doesn’t mean we have childish opinions.”

By the end of the day, Thunberg tweeted that according to one estimate, nearly 1 million children had attended the mass strike. It’s time for the adults to listen.

GizmoCrazed - August 6, 2010 0
Thought-controlled prosthetic arm is about to change everything For the current crop of state of the art prosthetic arms, you have to control the finger...