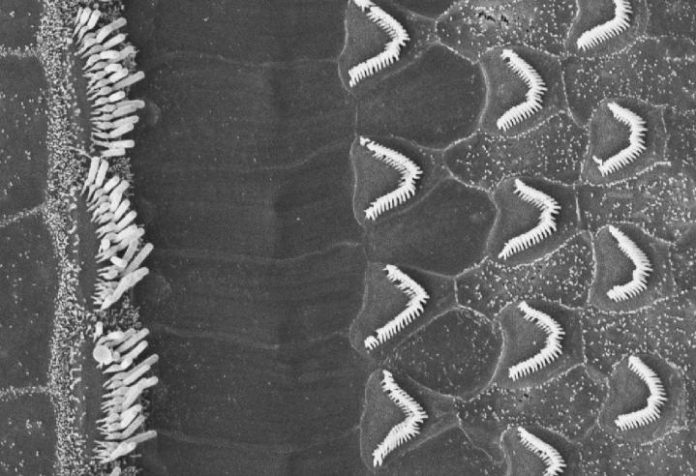 A high-powered microscope shows mouse ear close up, revealing bundles of inner and outer hair cells in the cochlea. The white filaments here are hairs of the bundles. Those are connected by tip links.(Credit: Tobias Bartsch)

Scientists at Rockefeller University claim they’ve pinpointed a protein in the ear that acts as a sort of molecular gatekeeper, helping convert soundwaves into the electrical signals that our brains interpret as sound. The finding, though incremental, helps establish a more detailed understanding of how hearing works.

Down the Inner-Ear Rabbit Hole 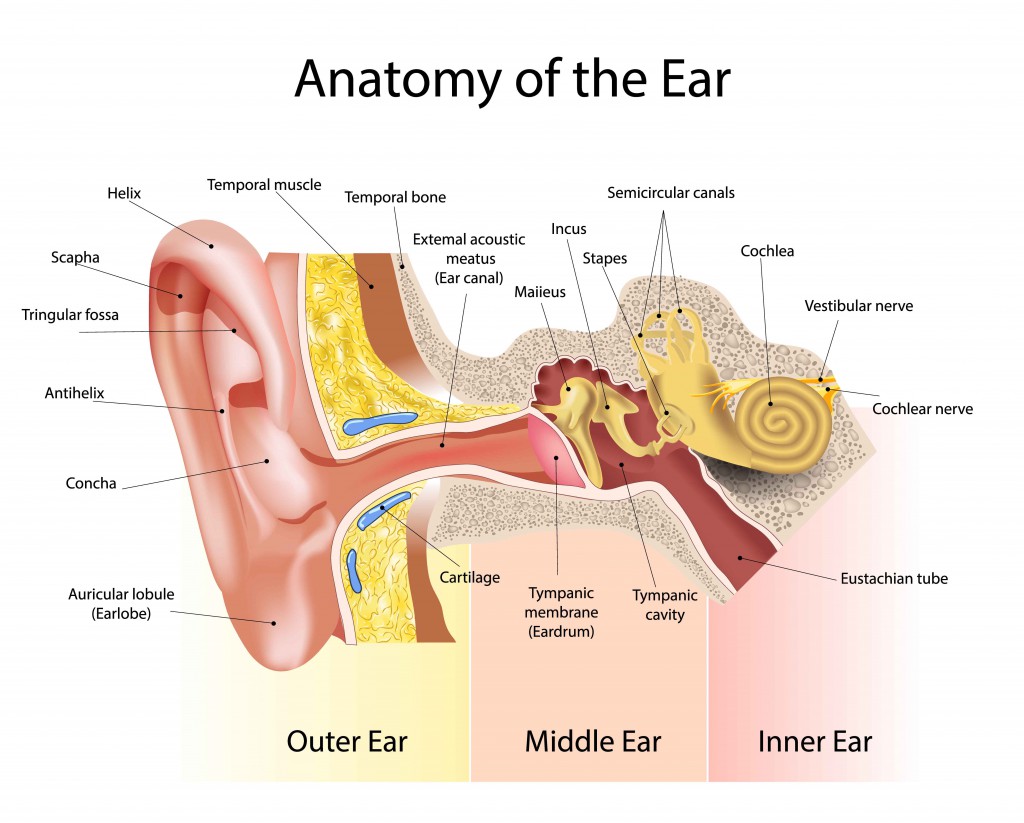 But first, some basics. Deep inside the ear, through your ear canal and past your ear drum, lies the inner ear. Here, there’s an important bit of anatomy called the cochlea. (It kind of looks a like a snail’s shell. Appropriate, since cochlea derives from kochlias, the Greek word for snail or spiral.)

The cochlea, which is also filled with a fluid called the endolymph, is really where the magic of hearing happens. Coiling along inside it is what experts call the organ of corti, where tens of thousands of so-called hair cells reside. Atop these hair cells are stereocilia; they come in different lengths and are grouped in order of increasing height, like a staircase. And atop those (stay with me) are little filaments called tip links. As their name suggests, these tip links connect the stereocilia, like a plank that acts as a little ramp from one stair to the next. 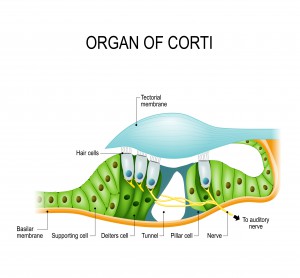 It’s a phenomenon in tip links that caught the attention of the Rockefeller researchers. When a sound wave enters the ear and reaches the cochlea, the wave disturbs the endolymph fluid within, causing a ripple effect that moves the hair cells, stereocilia and tip links. The subsequent tension in the tip links then triggers the opening of ion channels. These channels allow ions, basically any molecule (but usually potassium and/or calcium) that carries a charge , to pass through the cochlear nerve and on to the brain.

So what’s enabling the tip links to actually open those ion channels? The compounds that acts as the building blocks of life: proteins.

In this case, researchers figured it was just one protein acting as gatekeeper. And in order to actually open those ion channels, the protein acts like a molecular spring. “You need a reasonably soft spring in order to get gradual changes in the ion channels to interpret a range of noises,” explains Tobias Bartsch, a postdoctoral researcher at Rockefeller and one of the researchers responsible for the finding, in a press release. “If a spring is too soft, it won’t generate enough force to open the ion channels and signal to the brain. [And] if the spring is too stiff, small and large stimuli both generate forces large enough to open all channels, which means that you cannot differentiate between small and large sound amplitudes. ”

The problem, though, was that no one could figure out which protein was right for the job.

According to Bartsch, it’s because other groups had failed to account for an important detail. “Previous attempts to identify the protein responsible for stretching the ion channels open ignored the fact that this protein lives in a warm and wet fluid,” he says in the press release. “The temperature and aqueous environment can influence protein properties.”

So he and his team decided to take a look at a protein called protocadherin 15; past work had flagged it as being too stiff to open ion channels. However, when Bartsch and his team built a model that accounted for the cochlea’s endolymph and warm temperatures, protocadherin limbered right up, creating so-called thermal bends. “The moment there were thermal bends, protocadherin 15 became a soft spring at low tension,” Bartsch said in the press release. “And as we increased the tension, it became stiffer and resisted that force.” This range in pliability likely allows protocadherin to help us process sound waves in wide range of volumes. Bartsch and his team presented their findings last week at the 63rd Biophysical Society Annual Meeting.

Talk all things robotics and AI with TechCrunch writers

This MacBook Air Falls 1,000 Feet From an Airplane, Still Works

Scientists Confirm Existance of a New Type Of Chemical Bond –...

Vegetarian Diets Use Half As Much Water