Apple devices continue to lead the wearables market, according to a new report from IDC out today, which claimed the Cupertino-based company shipped a total of 46.2 million wearables for the year. The firm also reported the worldwide market for wearable devices grew 31.4 percent during the fourth quarter of 2018, to reach 59.3 million units shipped, while shipments for the year grew 27.5 percent for a total of 172.2 million. Apple retained its No. 1 position in wearables again in Q4, with 16.2 million wearables shipped — 10.4 million of which were Apple Watches, the report said.

Smartwatches together grew 54.3 percent in 2018, and accounted for 29.8 percent of all wearables. Apple Watches accounted for nearly half that market, the report said.

IDC forecasts that Apple’s growth in wearables will continue, thanks to a strong start for the newer Apple Watch Series 4.

In addition, IDC noted it recently revised its “ear-worn” category of wearables to include wireless headphones that allow users to call upon a smart assistant through either a touch of a button or hot-word detection. That means devices like Apple’s AirPods, Google’s Pixel Buds, Bose’s QC35II and others are now being counted among the wearables category.

Much of the growth in wearables was also attributed to the increasing number of these sorts of ear-worn devices, like Apple AirPods.

In Q4, for example, ear-worn devices grew 66.4 percent from the year-ago quarter to capture at 21.9 percent market share.

The firm said the growth was due to a combination of factors, including the increasing popularity of smart assistants and the ditching of the smartphone’s headphone jack, led by Apple.

“The market for ear-worn wearables has grown substantially this past year and we expect this to continue in the years to come,” said Jitesh Ubrani, senior research analyst for IDC Mobile Device Trackers, in a statement. “It is the next battleground for companies as these types of headphones become a necessity for many given the exclusion of headphone jacks from modern devices. Add to that the rise of smart assistants and in-ear biometrics and companies have the perfect formula to sell consumers on a device that’s complimentary to the device ecosystem that lives on their wrist and in their pocket,” he added. 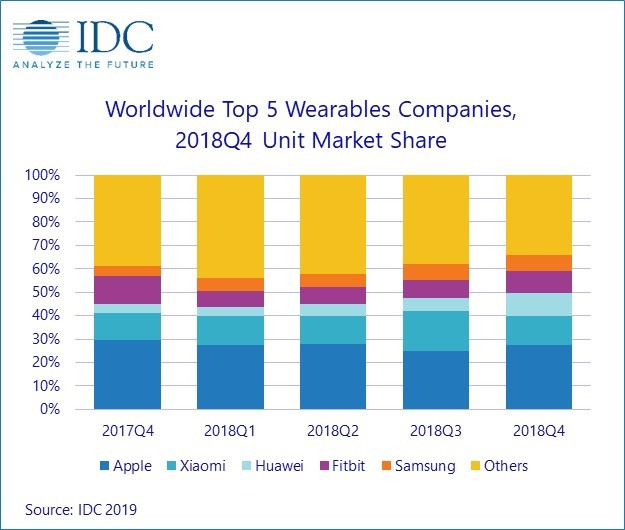 Meanwhile, smartwatches grew 55.2 percent to capture a 34.3 percent share. Wristbands reached a 30 percent market share, thanks to launches from Xiaomi, Huawei and Fitbit.

Xiaomi was in second place for the quarter, behind Apple, with a 12.6 percent market share compared with Apple’s 27.4 percent. The company remains strong in its home country of China, but sales of its Mi Band 3 have also done well. Of note, its Mi Band 3 accounted for more than 30 percent of all wristbands shipped during Q4.

Behind Xiaomi was Huawei, which grew by a sizable 248.5 percent thanks to Huawei and Honor phones being bundled with wearables, along with other product launches. Fitbit and Samsung rounded out the top 5, with the former returning to growth thanks to the Charge 3 and promotions around its Versa, and the latter also by bundling wearables with its smartphones.