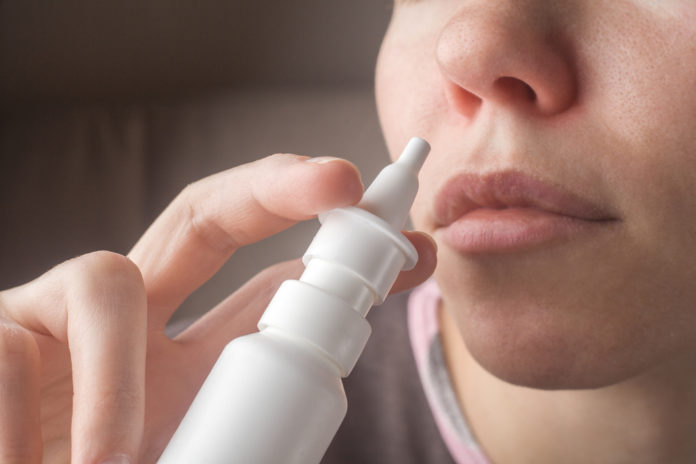 A new form of ketamine, called esketamine was recently approved as a nasally-delivered antidepressant. (Credit: grey_and/Shutterstock)

An hour before we spoke, Darragh O’Carroll, an emergency room physician from Hawaii, had just given an elderly patient a sedating shot of ketamine. The man had pneumonia and was acting confused and fidgety, making him hard to treat.

“Not only it was a pain control for him when I was putting needles into his neck, but it also kept him still,” O’Carroll says. “And with very minimal risk of lowering his blood pressure.”

Ketamine’s use as an anesthetic — and not as a party drug — is widespread, though not commonly known. In fact, the World Health Organization estimates ketamine is the most widely used anesthetic in the world and keeps it on their list of essential medicines, a category of drugs that all developed countries should have on hand.

O’Carroll has described ketamine as his “favorite medicine of all time” in an article for Tonic, not only because the anesthetic is incredibly safe and effective, but also because of its versatility. It’s most widely used in surgery, but could also help treat severe asthma, chronic pain, and may even possess anti-tumor properties. In the last two decades, ketamine has also emerged as a potent antidepressant, able to treat symptoms of some mental illnesses in less than 72 hours.

“I think the more research that goes into ketamine, the more uses that we find for it,” O’Carroll says.

From PCP to Painkiller

Ketamine’s story begins with a drug called PCP. Yes, that PCP — phencyclidine or so-called “angel dust,” a drug that when smoked can cause a trance-like state, agitation and out-of-body hallucinations. After it was first synthesized by medicinal chemist Victor Maddox in 1956, the drug was briefly approved as an anesthetic by the FDA for its sedative properties. In tests with a wild rhesus monkey, for example, researchers put their fingers in the previously aggressive animal’s mouth and watched its jaw remain slack.

But while it was safe and effective for pain relief, the side effects of PCP soon became too obvious to ignore.

Some patients under the influence of PCP would feel like they lost their arms or legs or that they were floating in space. It could also cause seizures and delirium. Scientists began seeking a shorter-acting anesthetic without convulsant properties. In 1962, chemistry professor Calvin Stevens discovered a PCP analogue that fit the bill: ketamine.

Ketamine is a potent, sedating painkiller that can cause amnesia and is mostly used in surgery and veterinary medicine. During the Vietnam Invasion, ketamine saw widespread use in the U.S. military because it has several advantages over opioids. First, unlike morphine, ketamine doesn’t suppress blood pressure or breathing. It also doesn’t need to be refrigerated, making it useful in the field or in rural areas that don’t have access to electricity.

Ketamine’s benefits extend beyond use as an anesthetic, though — in some cases it can serve as a balm for the mind as well. A 2008 analysis found that burn victims who were given ketamine were less likely to develop symptoms of post-traumatic stress disorder, even if their injuries were more severe. Those findings have been replicated, such as a 2014 clinical trial of 41 patients, who saw their PTSD symptoms diminish within 24 hours, an effect that lasted for two weeks.

“When somebody gets one of their limbs dramatically blown off or is shot in the face, it’s a very traumatic event,” O’Carroll says. In such a situation, giving ketamine not only provides instant pain relief, it could prevent long-lasting trauma.

Because its chemical structure is so similar to PCP, ketamine can still give lucid hallucinations, such as feeling that your mind has separated from the body — a dissociative state users sometimes call a “K-hole.” One recent study based on users’ written reports even indicated that this kind of experience might be a close analogue to a near-death experience. However, these dissociative states only happen at high doses — the amount of ketamine used to for surgery and to treat depression is typically much lower.

But ketamine’s side effects are less common and easier to manage than PCP. In fact, ketamine is one of the safest drugs used in medicine today and can even be given to young children. For example, ketamine was used to sedate the boys’ soccer team trapped in a cave in Thailand last year. Putting the kids in a tranquilized state made it easier to rescue them, and ketamine is safer than the opioids or benzodiazepines that are also commonly used as sedatives.

But it wasn’t until the 1990s that what could turn out to be ketamine’s most important function was discovered. A team from Yale University School of Medicine was examining the role of glutamate, a common neurotransmitter, in depression, and discovered something remarkable: ketamine could rapidly relieve depression symptoms.

“To our surprise, the patients started saying, they were better in a few hours,” Dennis Charney, one of the researchers, told Bloomberg. This rapid relief was unheard of in psychiatry.

Glutamate is associated with neural plasticity, our brain’s ability to adapt and change at the level of the neuron. Ketamine blocks certain glutamate receptors, but not others, and the end effect could be to promote the growth of new neurons while protecting old ones. This could explain how ketamine can help reset the brain, though the theory hasn’t yet been definitively proven.

The prescription meds currently on the market for depression have some major drawbacks. Drugs like Prozac or Wellbutrin can take a few weeks or months to kick in while worsening symptoms in the short term — not a good combination, especially for someone who is extremely depressed, or even suicidal.

It took around a decade for mainstream science to take notice of these early ketamine-depression studies. But once it did, ketamine clinics began popping up all across North America, offering fast relief for depression, anxiety and other mental illnesses. Patients are given an infusion — an IV drip that lasts about an hour — and many people, but not everyone, have seen rapid relief of their symptoms.

Suddenly, ketamine infusions became trendy, though the science to back up some of the medical claims is still inconclusive, according to STAT. However, ketamine infusions are rarely covered by insurance, although that is changing. A typical session can run $700, with many patients taking six sessions or more. But many of these patients have so-called treatment-resistant depression. They’ve tried other medications or therapies without success and some see ketamine as a last resort.

Steven Mandel, a clinical psychologist and anesthesiologist, has used ketamine on patients since it first came on the market around 50 years ago. In 2014, he began using it for patients with depression and opened Ketamine Clinics of Los Angeles, one of the oldest and largest clinics in the country. They’ve done over 8,000 infusions so far.

“Our success rate is better than 83 percent,” Mandel says. For his clinic, success means a 50 percent improvement of depression symptoms for longer than three months.

Ketamine’s success as an antidepressant couldn’t help but attract the attention of major pharmaceutical companies as well. In 2009, Johnson & Johnson began developing their own version of the drug they called esketamine. Rather than an infusion through a vein, it’s dispensed through a nasal spray. The FDA approved their formulation in early March. It was the first drug in 35 years to fight depression using a different approach than traditional drugs.

“Esketamine is a giant step forward,” Mandel says. “It means we’re not going to be demonizing mind-altering substances used for therapeutic purposes. It opens the door to research on LSD, on psilocybin, on MDMA and many other agents that could possibly relieve a great deal of suffering.”

But many clinicians have raised concerns about long-term side effects, such as heart and bladder toxicity. Others have been critical of esketamine, saying there isn’t enough data yet to suggest the drug is safe or effective. Husseini Manji, a neuroscientist who helped develop the drug for Johnson & Johnson at their subsidiary Janssen, has pushed back against these claims.

“When you line up the totality of the studies, it was really an overwhelming amount of data that was all in the same direction,” Manji says in a call. Though just two of the five late-state clinical trials showed significant results, the changes in mood in the three that fell short were “almost identical in magnitude” to the others, Manji says. It was enough for the drug to meet standards for FDA approval.

We can probably expect other ketamine-related drugs to come to market soon. ATAI Life Sciences, a company funding research on the use of magic mushrooms for depression, is developing their own ketamine depression drug. The pharmaceutical company Allergan also developed rapastinel, another ketamine-like drug, though it failed to show any real benefits for patients in later trials. Manji says this is unfortunate for people who could be helped by these kinds of drugs.

“From a patient standpoint, we were hoping it would work,” he says, even though he was not involved in rapastinel’s development. “But sometimes if you really haven’t got the mechanism right and you haven’t really threaded the needle, then sometimes you don’t see these results.”

Even though ketamine’s medical uses are well-established, most people have only heard of ketamine in the context of a party drug. Because of this bad reputation — and what’s perceived as growing misuse of the drug — several countries, such as China and the UK, have tried to place greater restrictions on ketamine. This would make it harder to study and more expensive in clinical use.

“If it was to ever be rescheduled, places that would be first affected would be you know places that need it most,” O’Carroll says. The WHO has asked at least four times for countries to keep access to ketamine open. “The medical benefits of ketamine far outweigh potential harm from recreational use,” Marie-Paule Kieny, assistant director general for Health Systems and Innovation at WHO, said in 2015.

So far, no countries have put greater restrictions on ketamine, and that’s probably a good thing. Ketamine has a rich history, but its future is still being written.

MemSQL raises $30M Series D round for its real-time database

Cryptocurrency Mining Is Hampering the Search for E.T.