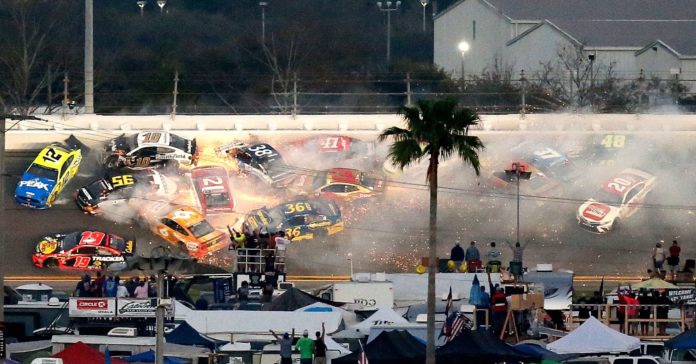 I don’t normally watch many NASCAR races, but I do come across some NASCAR videos online. Sometimes these clips become the basis of a great physics problem. In this case, it’s a 21-car crash at the Daytona 500 earlier this week. There are two things I find amazing about it: First, that a tiny collision between two cars can lead to a bunch of cars getting knocked out of the race. Second, that the cars have so much technology that none of the drivers was seriously injured.

But what about the physics? It’s that bird’s-eye view of the race, as seen from the blimp, that gets me thinking about physics. That top view essentially gives us a very expensive physics homework question. You can see the position of each car in different frames of the video. This will allow for a measurement of both velocity and acceleration.

Before the crash, there’s nothing much to analyze. After the crash, the cars are sliding along the track and slowing down due to friction. When a car is moving sideways on the track, the wheels don’t really roll. This means the tires are sliding along the track and creating a frictional force that slows the car down. Sure, there are other forces (like air resistance and other car parts rubbing on the ground)—but for now, let’s just assume it’s only sliding rubber.

Here is a force diagram for a sideways-sliding car:

Of course there is a downward gravitational force on the car—we already knew that. Since the car doesn’t leave the surface of the road, there must be another upward force to balance the gravitational force. This force is from the road and it is perpendicular (normal, in geometry-speak) to the surface such that we call it the normal force. The last force is the kinetic friction force—it’s parallel to the surface. It is this frictional force that slows down the car (since there is no other horizontal force).

The magnitude of this frictional force depends on the magnitude of the normal force. The harder the car is pushed against the track, the greater the frictional force. This force also depends on the two types of materials interacting. In this case, it is the track and the rubber on the tires. We call this factor the coefficient of kinetic friction and use the Greek symbol μ. This gives the following equation:

Since this is the only horizontal force (and because the normal force depends on the gravitational force), we can get the following relationship between the acceleration and the coefficient of friction. Remember that the net force in the x-direction is equal to the product of the mass and the x-acceleration.

Boom. That’s it. All I need is to determine the acceleration of a sliding car and I can get a value for the coefficient of kinetic friction between the tire and the road. It will be fun.

Actually, I am going to find the acceleration of a sliding car two different ways. That means I will get two values for the coefficient of kinetic friction. If all goes well, they will be close to each other.

Suppose the cars are traveling at 84 meters per second (I roughly measured this from the video), and then one starts to slow down because of the frictional force. If I can find the acceleration, I can find the coefficient of friction. This can be figured out by knowing three things: the starting velocity, the final velocity, and the distance traveled. I know the starting velocity and the final velocity will be zero. That means I just need to measure the distance traveled until it stops. If I call this distance “x,” then I can use the following kinematic equation:

Now I just need the distance. That’s where that nice top view from the blimp becomes useful. Looking at that and Google Maps, I can find the distance traveled while sliding. By approximating the starting and ending spot of that first car, I get a distance of about 468 meters. This gives an acceleration of -7.53 m/s2 with a coefficient of kinetic friction at 0.769.

Oh, you don’t like my values? Fine. You can use your own values. Here, I will make it even easier for you. This is the Python code I used to calculate this stuff. Remember that Python makes an awesome calculator.

One more very important point: Notice that the stopping distance is proportional to the square of the velocity? Yes, if you are driving twice as fast, you’ll need a stopping distance four times longer. Be careful when driving fast.

So that’s pretty straightforward. I can approximate this change in time by looking at the start of the collision and the time the car stops. From this, I get a slightly lower acceleration of 6.13 m/s2 and a coefficient of 0.625. This value is close enough to the other method to keep me fairly happy. Also, a value of 0.6 to 0.7 for the coefficient of friction seems to agree with other sources. Again, that’s good.

Want to Stop Climate Change? Educate Girls and Give Them Birth...

GizmoCrazed - February 18, 2018 0
Climate change is a ubiquitous hydra, a many-headed beast that affects everyone and everything in some form. Solutions to climate change range from the...

How Technology is Revolutionizing the Elder Care World

Promising New Cancer Immunotherapies Have Arrived—But Not For Everyone