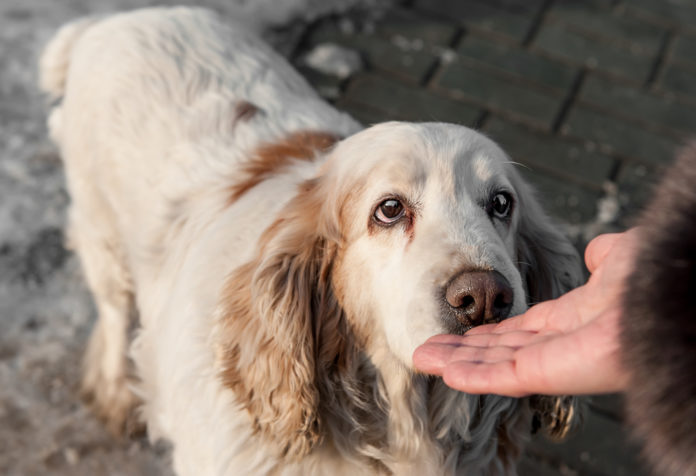 Researchers say dogs can be trained to use their extraordinary sense of smell to detect seizures. (Credit: Medvedeva Oxana / shutterstuck)

People have long known that the canine sense of smell is a powerful tool. Dogs lend their super snouts to help find missing people, illegal drugs, and even screen for diseases like malaria and cancer. Now, scientists say that dogs can add a new talent to their sniffing repertoire: detecting seizures.

A small study has found that humans emit a distinct odor during epileptic seizures, and that some dogs can be trained to recognize the smell. In a new paper published in Scientific Reports this week, researchers show that trained service dogs could correctly identify seizure odors anywhere from 67 to 100 percent of the time. Some dogs had a 100 percent accuracy rate during the scent test, however, even lower-performing dogs could identify seizure odors at a rate that was better than random chance.

The researchers say their study is the first to show that seizures do cause a detectable change in human body odor — and that dogs can be trained to use their powerful sense of smell to recognize it. The finding gives researchers and the 65 million people worldwide living with epilepsy new hope for the efficacy of seizure alert dogs. Many people who experience seizures anecdotally report that service dogs do help them manage some aspects of their condition. But until now, there has been little scientific evidence to support dogs’ abilities to detect seizures.

The study included three female dogs and two male dogs of mixed breeds. The canines were adopted from shelters and trained to be disease-detection experts by Medical Mutts, a service dog training center based in Indianapolis.

Amelie Catala, the study’s lead author and a doctoral student at France’s University of Rennes, said the dogs’ seizure-detection abilities were tested using sweat samples they had never been exposed to before. The samples were collected from seven women with different types of epilepsy during a range of activities, like resting, exercising, and while having a seizure.

“The results show that all dogs were highly successful, well above chance,” Catala said. “But one of them in particular was a bit less accurate, which may be due to him arriving later in the training program and having less training.” She added that some dogs also might simply have a better sense of smell than others.

Catala said the study demonstrates that seizures produce a signature odor that is common across people with different forms of epilepsy, and that the scent is distinguishable to dogs. It does not conclusively prove, however, that dogs can sense an oncoming seizure using their noses. Learning more about the chemical compounds of the seizure odor and when they are emitted could help researchers understand how, and if, dogs can predict seizures.

Most breath and body odors are normal, but sometimes they can signal a health problem. Catala said that targeting odors can be a non-invasive and cost-effective way to detect and diagnose medical conditions. And it’s not just dogs who can smell these diseases. There are also human “super smellers” who possess an exceptional sense of smell. One of the most well-known super smellers is Joy Milne, a woman who can smell Parkinson’s disease.

Learning more about the organic compounds that different diseases emit, and how super-smelling humans and animals detect them, could one day lead to better technologies to diagnose and treat diseases. But for now, the study gives us one more reason to appreciate man’s best friend.