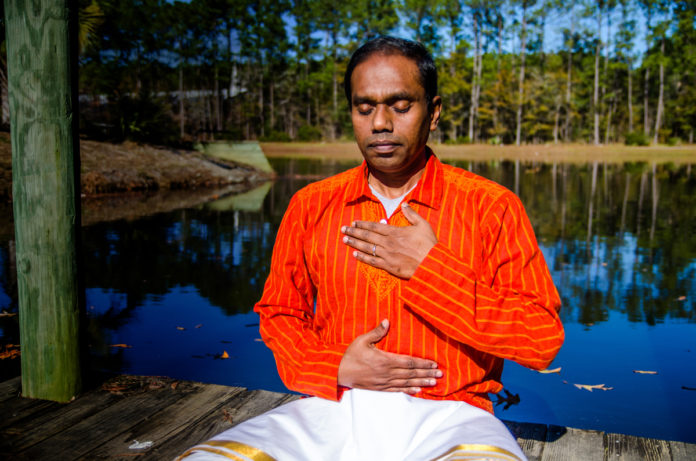 As a cell biologist, Sundar Balasubramanian never forgot his rural southern Indian roots, or the traditional practices his uncle, the village healer, exposed him to. Today, as a researcher and assistant professor at the Medical University of South Carolina, Balasubramanian has turned his focus back to those roots — specifically, to pranayama, a deep-breathing relaxation technique. He’s showing that this ancient yoga practice is about more than relaxing — it can change us at the cellular level.

Q: What made you examine this technique through a cellular biology lens?

A: In 2005, I noticed while I was practicing pranayama, I was producing so much saliva that I was almost drooling. I wondered why and what the overall impact of that was. This led me and my team to study whether increased saliva production was a common response to the practice, and we found that it was.

Q: Most people wouldn’t think much of getting spitty when they focus on breathing and relaxing. But your 2016 study in BMC Complementary and Alternative Medicine showed this bump in salivation seems to matter. Why?

A: Saliva has numerous antibodies and proteins that do everything from suppressing tumors to regenerating the liver. For example, it contains immunoglobulin, which are antibodies that bind to germs, as well as DMBT1, a tumor suppressor that blocks the conversion of normal cells to cancer cells.

Q: Your 2015 study in International Psychogeriatrics showed that pranayama does more than just increase salivation. Can you elaborate?

A: Yes, it changes the makeup of saliva by increasing the amount of nerve growth factor (NGF). When NGF is produced, it’s transported to the brain, where it signals nerve cells to grow or survive longer. Increased NGF could have a major impact on aging, and specifically on some of the degenerative diseases of the day like Alzheimer’s and cancer.

Q: Do you have any upcoming or ongoing research projects on pranayama?

A: We’re about to start a study on patients with scleroderma, a chronic disorder that causes the body’s connective tissue to swell and harden. We’ll look at how these breathing techniques impact inflammation and how this relates to disease symptoms. We’re also in the beginning phases of a study that will look at whether deep breathing can reduce pain, improve appetite and improve mood in cancer patients.