We’ve decided to step back from the breaking news for a minute to conduct a review of seed and early-stage funding trends over the last decade for U.S.-based companies.

I’m fairly certain we can all agree that the environment for startups has changed dramatically in the past 10 years, specifically in two major ways:

What we’ve also seen are recent concerns raised about the decline in seed stage funding by Mark Suster, a partner at UpFront Ventures, as there has not been commensurate growth in early stage funding (Series A and B), to meet this growth in seed-financed companies. This is often expressed as the Series A crunch.

So with venture funding at an all-time high, along with increased growth in supergiant rounds, now seems like an appropriate time to conduct this kind of review.

First, let’s set the stage for our analysis and explain where our data comes from with a few quick facts:

Now, let’s take a look at the trends.

Rounds below $1 million are slumping

Since 2014 we have seen mostly double-digit declines in less than $1 million rounds each year – a strong pivot from 2008-2014 when we saw double-digit growth.

In 2018 seed funding counts and amounts below $1 million were down from 2015 at 41 and 35 percent respectively. Given that data at this stage can be added long after the round took place, we assess there could be a 20 percentage-point relative increase in 2018 compared to 2017.

$1 million to $5 million rounds are flattening

Round from $1 million to $5 million also experienced growth from 2008 through 2015, more than threefold for counts and close to threefold for amounts. Upward growth stalled from 2015. However, we do not see a substantial downward trend in the last three years. Dollars invested are stable at $7.5 billion from 2015 through 2017. Counts and amounts are down in 2018 from the 2015 height by 12 percent for deal count and 6 percent for amounts.

At Crunchbase we are always cautious about reporting downward trends for the most recent year or quarter, as data does flow in after the close of the most recent time period. If the trend is over a greater time period, that is a stronger signal for change in the market. Based on data continuing to be added after the end of a year for the previous year, we assess around 10 percentage point increase relative to 2017. This would make 2018 roughly equivalent  to 2017 on rounds and slightly up on amounts. 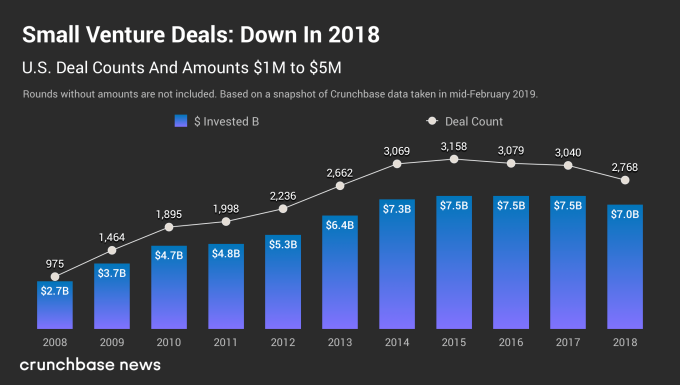 Why is seed flattening? Seed investors report putting more dollars into fewer deals. Or as they raise more substantial subsequent funds, they are putting more dollars into the same number of transactions. Seed funds need to get enough equity for a meaningful stake, should a startup survive to raise subsequent rounds. Seed funds are investing in fewer startups for more equity.

UpFront Ventures’ Suster (referenced earlier) also talks about larger venture firms becoming less active in seed, as investing at the seed stage can limit their ability down the road to invest in competitive startups who emerge as growing contenders in a specific sector. The growth of more substantial funds in venture allows firms to see deals mature before investing, perhaps paying more to get the equity they want, and allowing startups not growing as quickly to fail or get acquired.

The middle is growing

For the middle, Series A and B rounds (which used to be the first institutional money in), the market for $5 million to $10 million rounds has almost doubled, but it has taken from 2008 to 2018. In that same period, growth has been slower than round below $5 million. Growth has continued past 2015. Since 2015, rounds are down slightly for one year, and then continue to grow in 2017 and 2018. Counts are up from 2015 by 17 percent and dollars by 18 percent. 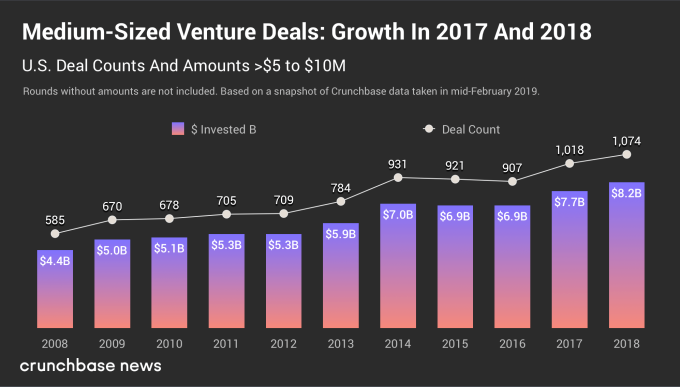 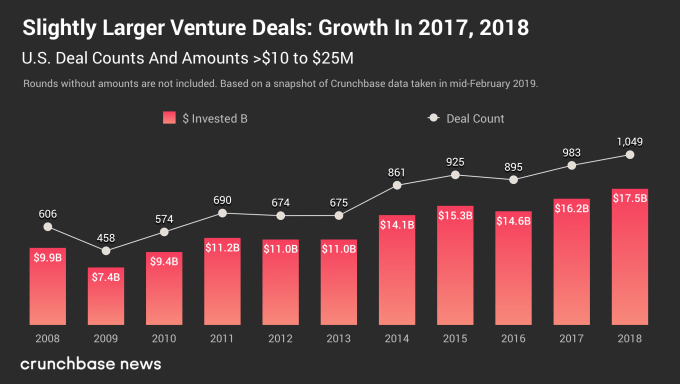 Seed is its own class that is here to stay. Indeed pre-seed, seed and seed extension all seem to have specific dynamics. Of the 600-plus active seed funds who have raised a fund below $100 million, close to half have raised more than one fund. In the last three years in the U.S. we have not seen a slowing of seed funds raised for $100 million and below.

When we take into account the data lag, dollars for below $5 million is projected to be $8.5 billion, close to the height in 2015 of $8.6 billion. Deal counts are down from the height by a fifth, which does mean less seed-funded startups in the U.S. Provided that capital allocation is greater than $5 million continues to grow, less seed funded startups will die before raising a Series A. More companies have a chance to succeed, which is good for seed funds, and ultimately for the whole ecosystem.

GizmoCrazed - February 27, 2012 0
Sony has just announced two new smartphones, the Xperia P and Xperia U, at the Mobile World Congress being held in Barcelona. It was the first press...

Boeing to fix deadly 737 Max software, but is that enough...

Tips For Improving Your Financial Situation

An Autumn Bounty of Citizen Science