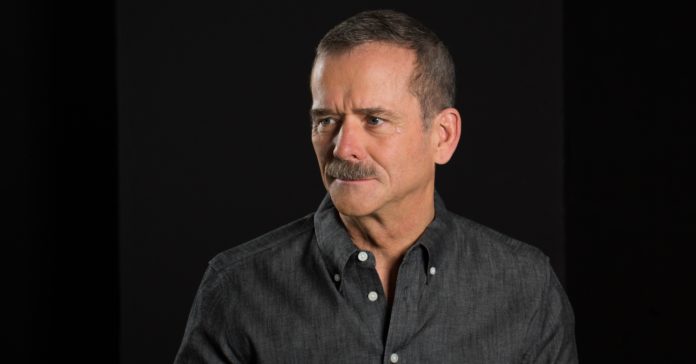 When many people think of astronauts, they think of absurdly qualified men and women drifting through the cylindrical modules of the International Space Station, or floating beside its broad, golden solar arrays on an improbably serene spacewalk. The improbable thing about it being not the presence of a living soul in low Earth orbit (the ISS has been continuously inhabited for going on two decades), but the fact that anyone falling around the planet at 17,000 miles per hour can go about whatever it is they’re doing with such equanimity.

Astronauts owe much of their composure in space to the time they spend preparing here on Earth. “I was an astronaut for 21 years,” says Chris Hadfield, the charismatic Canadian astronaut renowned for his social media savvy, his photos from low Earth orbit, his untoppable cover of David Bowie’s “Space Odyssey,”, and his chevron mustache. “I was only in space for six months.”

In this video, Hadfield, who retired in 2013, describes not only that brief time in space—three missions spanning 166 days—but all the time surrounding and leading up to it that made those excursions possible. People often ask him what astronauts do between spaceflights, “as if we’re, like, sitting in a waiting room or lounge somewhere.” But there’s a lot more to #astronautlife than bobbing about in microgravity.

After becoming an astronaut in 1992, Hadfield, for instance, spent most of his time planetside supporting other astronauts. For 25 consecutive Space Shuttle missions, he served as NASA’s chief capsule communicator, or CAPCOM for short; when orbiting astronauts radioed mission control, it was Hadfield they would talk to. “When Houston wants to talk to a spaceship, you can’t have 50 people talking on the radio,” Hadfield says. “I was sort of the trusted agent for the crew on Earth.”

The time he spent supporting other astronauts prepared Hadfield for his own sojourns in space. In fact, all that time fielding incoming transmissions from low Earth orbit may have helped calm his nerves when he found himself calling Houston for help just a few years later.

In 2001, Hadfield was working outside the International Space Station on his first spacewalk when he was struck blind in one eye. The antifog treatment on his spacesuit’s visor had irritated it, causing it to tear and blur his vision. With nowhere to go in microgravity, the liquid accumulated and trickled over to his other eye, blinding him completely. He called down to Houston for assistance.

Mission control instructed Hadfield to open his helmet’s purge valve. He remembers floating there, blind, tethered to the ISS by his feet, listening to air hiss from his spacesuit. “Fortunately, that fresh oxygen blowing in the back of my helmet was enough to start evaporating the big balls of tears on my eyes,” Hadfield says. “Eventually I could start to see again. I told them ‘I’m OK,’ shut my valve, and got back to work.” You know, as one does.

Hadfield went on to spend the early aughts overseeing various arms of NASA, first as the agency’s director of operations in Russia, where he became fluent in the mechanical workings of Roscosmos’ Soyuz TMA spacecraft and Orlan spacesuit. He then put his mechanical engineering degree to work as the Astronaut Office’s chief of robotics. After that came a stint as head of International Space Station operations at Johnson Space Center in Houston. From 2008 to 2009, he trained as a backup to astronaut Robert Thirsk for the 21st expedition to the ISS, while helping develop emergency procedures for the orbital outpost.

Once again, all that on-the-job training supporting his fellow astronauts served him well: In 2010, NASA named Hadfield the first Canadian commander of the International Space Station.

Divided over his 21 years as an astronaut, Hadfield’s time outside Earth’s atmosphere amounted to a mere 2 percent of his career. It was even less than that, if you count the time he spent working toward becoming an astronaut as a member of the Canadian military. Or before that, as a member of the royal Canadian Air Cadets. Or before that, as a kid playing spaceman in a Quaker Oats box turned rocket ship. In spaceflight, as in life, it takes preparation for you to really make the grade.