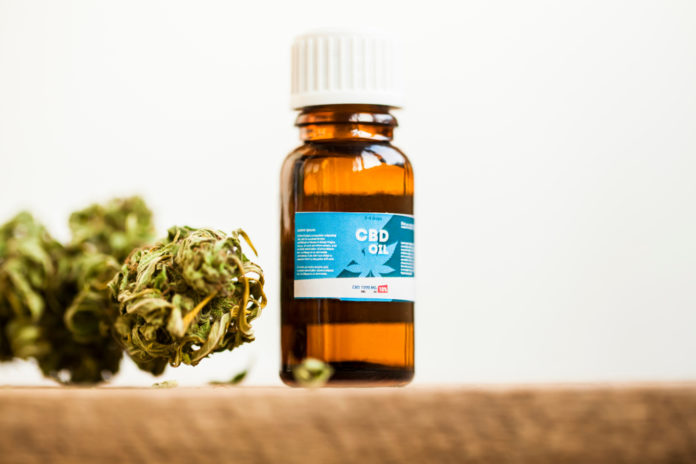 CBD, or cannabidiol, has exploded onto the market in recent years. Sometime in the past decade, this purportedly medicinal marijuana extract went from being an obscure stoner oil to the wellness product du jour, flooding from holistic markets to the mainstream. Analysts at the investment bank Cowen Inc. predict the industry will balloon to $16 billion by 2025. In comparison, CBD sales totaled less than $1 billion last year, though that’s no small feat for a field that didn’t exist a few years ago.

CBD is purported to help with everything from depression to chronic pain and some animal studies suggest it may even help fight cancer, according to the National Cancer Institute. The most compelling evidence for its efficacy at the moment comes from studies of epilepsy patients who have seen their seizures reduced with the help of CBD.

Based in part on its reputed curative properties, the compound has recently begun to enter the wider world of consumer goods. Inventive cannabis companies have started putting CBD in almost everything: shampoo, protein powders, transdermal patches and gels, gum, sex lubes, lip balms, vaporizers, deodorants, rectal suppositories, sports drinks — you name it. Mike Tyson, Martha Stewart and other public figures have started their own lines of CBD products while celebrity doctors Sanjay Gupta and Mehmet Oz have both given endorsements.

“We’ve seen just this incredible growth that I think took even the people in this market by surprise,” says Jamie Schau, head of research at Brightfield Group, one of America’s top marijuana marketing research firms. “We see it ultimately becoming a mainstream nutritional supplement rather than a cannabis product specifically, which has a rather limited audience.”

But it’s not clear how well some of these products work and the science on cannabidiol’s efficacy is still catching up. How over-the-counter sales of CBD will be regulated in the future, too, is uncertain, though an upcoming FDA ruling could change that. It’s likely CBD sales will continue in some form, meaning that you’ll probably continue seeing it in everyday products. Whether it will actually do anything for you though, well, that depends.

Cannabis plants are chemical factories that produce cannabinoids, which can mimic neurotransmitters in the brain. The cannabinoid that gets you high, THC, is the most well-known, but it’s quickly becoming eclipsed by cannabidiol both in terms of users and popularity.

Contrary to popular belief, cannabidiol actually is psychoactive, meaning it affects the mind. Its psychoactive properties are likely key to its purported effects as a balm for anxiety, inflammation, chronic pain and more. What it won’t do, though, is get you stoned. CBD is non-addictive and has few side effects, according to the World Health Organization, which has recommended lifting restrictions on the drug.

Because CBD is non-intoxicating and probably helpful for a range of common conditions, it’s led to an explosion of interest among brands. Want a little CBD with your morning coffee? No problem. Maybe in a bath bomb to help you unwind after a stressful day? An enterprising CBD company has your back. Few of these brands can point to specific published research on their particular product’s efficacy at the moment, though, leaving their marketing departments to trade in vague promises. 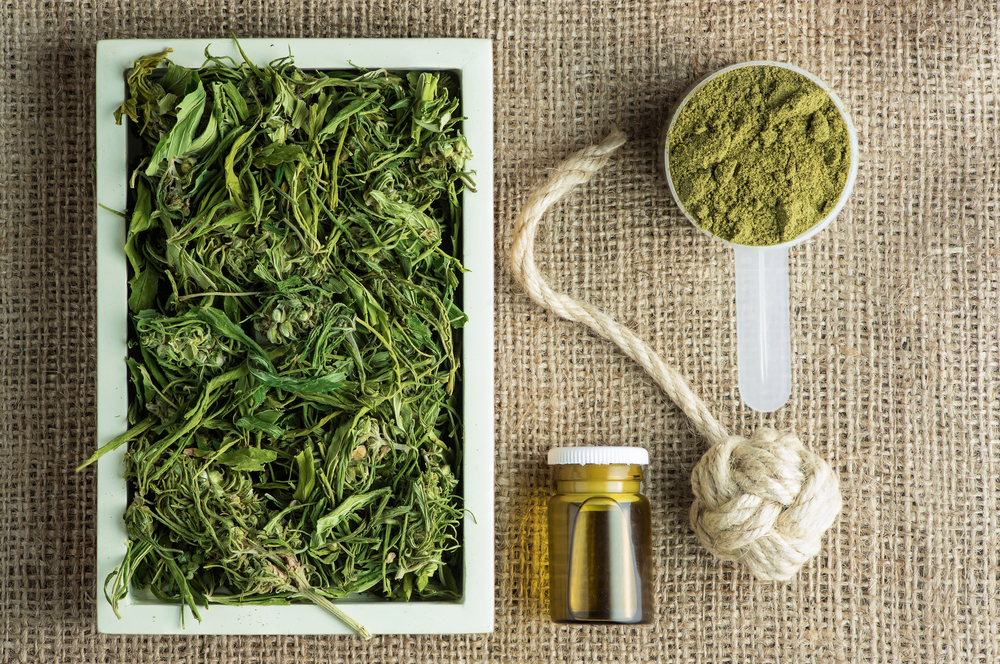 Hemp and a variety of products derived from hemp. The plant is a common source of CBD oil. (Credit: f 2.8/Shutterstock)

That’s not really their fault. Because of marijuana’s long history of prohibition (it’s still strictly banned at the federal level), research on cannabinoids has lagged for decades. It’s unknown how CBD actually helps, if at all, with things like insomnia or obsessive-compulsive disorder. Some preliminary studies have shown that it can help with inflammation when applied to the skin, but again, research is scarce. That’s especially true when it comes to individual products, which may make health claims without much evidence. That being said, there’s really no evidence that CBD on its own is harmful.

“CBD manufacturers are all over the board when it comes to their approach to this product … We don’t really have the research to back a lot of the claims,” Schau, the Brightfield researcher, says. “To give you a concise answer on what works, I honestly I have no idea. I personally would say quite a few of these products are going to fade out as the initial wave of people entering the market with these innovative products moves along and the wheat is separated from the chaff.”

Brightfield’s research tracks these product innovations, including manufacturer claims about what works, although they can’t verify them. These products haven’t been tested in clinical trials, and what’s on the bottle may not always be what you get. For example, a 2017 analysis of 84 CBD products sold online found only 31 percent were accurately labeled. If a CBD tincture doesn’t contain what’s advertised, its alleged therapeutic use can vary widely.

In a different study, some products were even found to contain contaminants, including cough syrup ingredients and synthetic cannabinoids, which can have serious side effects. And an NBC investigative team tested seven CBD brands and found a few products contained lead or pesticides.

“For people who are really using it for real therapeutic purposes, it’s important for them to know that there’s at least CBD in there and at what levels,” explains Catherine Jacobson, vice president of regulatory and medical affairs at Tilray, a cannabis pharmaceutical research company. “There’s no regulation right now for any of these oils. I could go extract hemp and put it into a bottle and say ‘hemp oil’ and sell it without making any claims about what’s in it.”

Will CBD Be Legal?

The FDA has paid close attention to these trends. Last December, around the time the Farm Bill legalized hemp, the agency issued a warning to companies making health claims on CBD products. It also said that putting CBD in food and drinks is technically illegal — but that hasn’t stopped many companies.

“This deceptive marketing of unproven treatments raises significant public health concerns, as it may keep some patients from accessing appropriate, recognized therapies to treat serious and even fatal diseases,” Gottlieb wrote. The FDA declined to comment for this article.

Worries about consumer products aside, the FDA last summer green-lit a CBD-based prescription drug called Epidiolex from UK-based GW Pharmaceuticals, which has so far generated $4.7 million in sales. The company says about 4,500 new patients were prescribed the drug in the first two months. Epidiolex, which treats rare forms of childhood epilepsy, was a historic approval because it’s made of actual marijuana plants, as opposed to synthetic cannabis-based drugs, such as the appetite stimulant dronabinol, which has been around for decades. 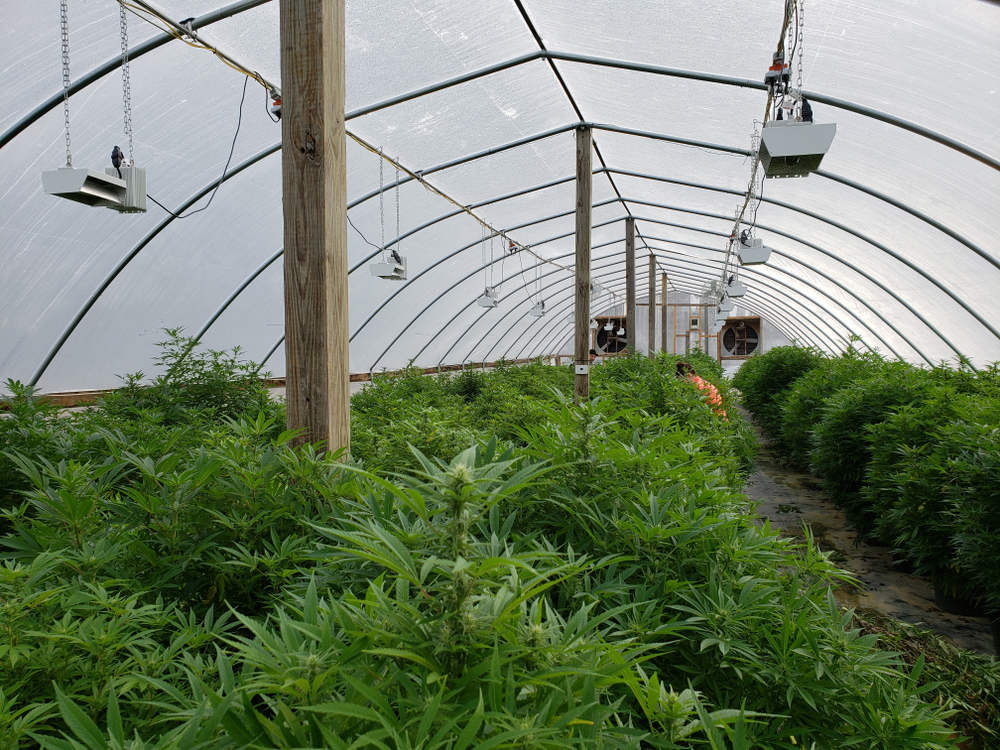 As part of Epidiolex’s approval, the Drug Enforcement Administration rescheduled the drug so that it required less regulatory oversight. But that only applied to the prescription drug, meaning over-the-counter CBD products are still illegal. Now, hemp-derived CBD oil is legal thanks to the Farm Bill, but not extracts from cannabis plants that produce more than 0.3 percent THC. The FDA still says you can’t put it in food or make medical claims about CBD.

Unsurprisingly, the lack of clear guidance has led to confusion among many CBD consumers and distributors. Some businesses could be forced to stop selling a certain product, which people may rely on to manage a serious illness. For example, some parents who give their children CBD extracts to help manage autism symptoms swear by specific formulations. Other businesses might simply not know how to proceed.

“The FDA has a difficult job in navigating a highly polarized environment with billions of dollars at stake,” says Philip Blair, senior medical consultant for Elixinol, a Colorado-based CBD company. “Consumer interest in the hemp space is rapidly gaining momentum while regulations continue to be at a standstill. Gottlieb’s resignation comes at a pivotal moment for the CBD industry. It will be important for his successor to take immediate action towards concrete guidance and regulations for the category to help alleviate consumer confusion.”

CBD In the Future

In 2017, Brightfield Group predicted the CBD market would expand to $2 billion by 2021. But just a year later, the company revised its forecast significantly upward: CBD sales could reach $22 billion by 2022. Coupled with Cowen’s evaluation at $16 billion, it’s clear financial experts envision explosive growth in this sector.

These predictions are based on the Farm Bill passing, as well as consumer and retailer surveys, and speculations from major corporations. The founder of Jelly Belly just debuted a line of CBD-infused jellybeans, though other corporations like Starbucks have pushed back against suggestions that they’re pursuing CBD products. Meanwhile, Neiman Marcus and Sephora already sell CBD beauty creams and oils. Coffee, too, is an especially popular choice for CBD, though some businesses have been ordered to stop adding it to their brews.

“The sports and fitness products and the women’s care products seem to be areas that are developing quickly,” Schau says. “They’re looking at it as a treatment for CTE [chronic traumatic encephalopathy] when they get frequent concussions.”

Case in point: in March the National Hockey League Alumni Association partnered with a cannabis company to develop CBD treatments that they say will protect against brain damage in athletes.

But after the FDA’s warning letter, and again after Gottlieb announced his departure, cannabis stocks have slumped. CBD’s future remains unclear, but it’s likely that regulation of some kind is coming. The FDA will hold their first public hearings on CBD in April to shape rules for how it can be sold.

Jacobson predicts the agency will severely limit highly concentrated CBD if it mimics Epidiolex, regulating extracts more like drugs than food. That means many products currently on the market would see their potency slashed, which could render them useless as medicines — if they did anything to begin with. Alternatively, Gottlieb’s successor, who has yet to be named, could decide to ignore this issue entirely.

“You could see it go either way,” Jacobson says. “But given the CBD oil market that would be a tough thing to enforce. And I don’t think FDA has the resources to enforce going after every CBD oil producer.”

Regulatory uncertainties aside, it seems clear that CBD is likely to continue popping up in our products for the near future. For those who use the compound to manage their anxiety, seizures or other conditions, that’s good news — provided manufacturers are clear about what they’re selling. For the rest of us, we’ll just have to decide whether the purported benefits are worth the often-hefty price tag.

GizmoCrazed - May 22, 2016 0
How the Average American Spends Each Hour of the Day

The Democratic Debates Will Be About Climate—Disguised as Other Issues

The Astounding Engineering Behind the Giant Magellan Telescope