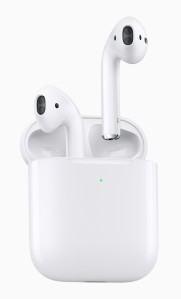 The new AirPods are fitted with the H1 chip, which is meant to offer performance efficiencies, faster connect times between the pods and your devices and the ability to ask for Siri hands-free with the “Hey Siri” command.

Because of its performance efficiency, the H1 chip also allows for the AirPods to offer 50 percent more talk time using the headphones. Switching between devices is 2x faster than the previous-generation AirPods, according to Apple.

Here’s what Phil Schiller had to say in the press release:

AirPods delivered a magical wireless experience and have become one of the most beloved products we’ve ever made. They connect easily with all of your devices, and provide crystal clear sound and intuitive, innovative control of your music and audio. The world’s best wireless headphones just got even better with the new AirPods. They are powered by the new Apple-designed H1 chip which brings an extra hour of talk time, faster connections, hands-free ‘Hey Siri’ and the convenience of a new wireless battery case.

The second-gen AirPods are available with the standard wired charging case ($159), or a new Wireless Charging Case ($199). A standalone wireless charging case is also available for purchase ($79). We’ve reached out to Apple to ask if the wireless case is backward compatible with first-gen AirPods and will update the post once we know more.

Update: Turns out, the wireless charging case works “with all generations of AirPods,” according to the Apple website listing.

Two times faster switching and 50 percent more talk time might sound like small perks for a relatively expensive accessory, but I’ve found that one of my biggest pain points with the AirPods are the lack of voice control and the time it takes to switch devices. The introduction of “Hey Siri” alongside the new H1 chip, as well as much faster switching between devices, should noticeably elevate the user experience with these new AirPods.

After a search through the Apple website, it appears that old AirPods are no longer available for sale.

The new AirPods are available to order today from Apple.com and the Apple Store app, with in-store availability beginning next week.