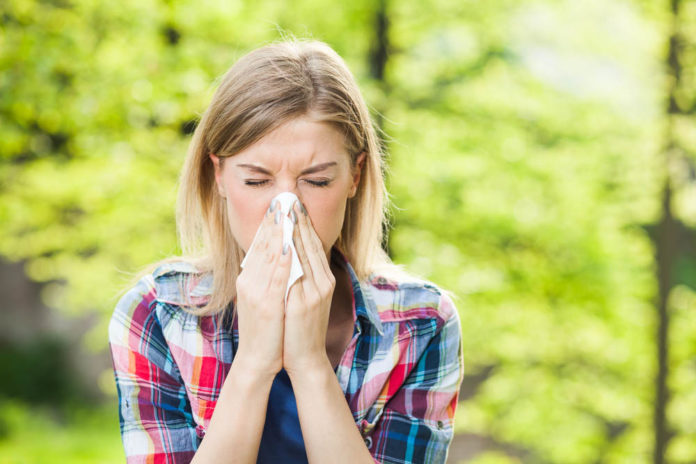 With the warm weather upon us and the once-frozen plants coming back to life, springtime feels like a long-awaited oasis for most people. But for some, the resurgence of trees and grass can trigger seasonal allergies, and turn springtime into a sneezy, snotty mess. Instead of just popping your allergy meds and hoping for the best, a group of researchers think they may have just enabled a new approach to allergy relief.

Research published on March 19 in the journal Cornea shows how contact lenses, infused with antihistamines, could ease the itchy, watery eyes associated with allergies. Caused by things like pollen and pet dander, these contacts could relieve your scratchy eyes while also correcting your vision. The idea excites researchers at Johnson & Johnson, who created the contacts and led the study. But the product isn’t a catch-all solution for allergy sufferers, and other multi-use contacts have struggled to succeed in the past.

Let’s face it, allergies suck. Whether they’re allergies to outdoor pollens or fluffy dogs and cats, there’s no long-term solution to the pesky problem. Thankfully, there are medications that can help ease allergy symptoms. A common one is the antihistamine ketotifen, which treats scratchy, watery eyes. They’re typically sold as eye drops. But researchers are testing a new way to administer the drug: by fusing it into your contact lenses.

“Currently, eye drops are not indicated to be used in conjunction with contact lenses,” said Brian Pall, the director of clinical science at Johnson & Johnson Vision Care. He adds that, without eye drops, people end up rubbing their eyes and knocking their lenses out of place. Many ditch their contacts all together during allergy season.

To make life easier for them, Johnson & Johnson developed single-use lenses with ketotifen already built in. The contacts are intended to provide all-day relief from itchy eyes, eliminating the need to switch back to glasses.

To test the product, Pall led two separate but identical studies. He took 244 total participants, who all regularly wear contacts and have allergies to either grass, trees, ragweed, cat hair or cat dander, and randomly divided them into three groups.

The first group had an antihistamine lens put in one eye and a placebo lens in the other, the second group was given two antihistamine lenses, and the third was given a pair of placebos. After wearing the lenses for 15 minutes, and again after 12 hours, the researchers exposed participants to their given allergen. Afterward, they asked them to rate their level of itchiness and eye redness from 0 to 4, with 0 being no itchiness/redness and 4 being severe itchiness/redness.

In all, those who wore the antihistamine-infused contacts had an average itchiness score of 0.52 after 15 minutes, where those who wore placebos averaged 1.77. Results were similar after 12 hours of use, with itchiness averaging 0.77 for medicated lenses and 1.89 for placebos.

The results suggest that contacts with built-in allergy meds could provide relief for itchy, watery eyes, but it isn’t a catch-all solution. For starters, the contacts didn’t do much for eye redness, with no significant difference noted by the participants. Plus, itchy eyes are just one of many allergy symptoms, so users would still need to use other antihistamines to treat their coughing, sneezing and congestion.

The contacts’ price could also factor into their success. Since they’re pre-loaded with medicine, and can only be worn once, they’ll probably cost more than your average prescription. Consumers might also be hesitant, at least at first, to put drug-infused contacts in their eyes. All things considered, there’s a chance that they could suffer the same fate as other multi-use lenses, like the ones developed by Google to monitor your blood glucose. They were supposed to hit the market around 2020, but inaccurate blood sugar readings put the project on hold in 2018.

Based on their dedication, though, there’s a chance that Johnson & Johnson’s outcome might be different.

“Here’s a potential new platform for how we can allow contact lenses to really serve our patients’ needs,” said Pall. “We’re committed to continuing this research path and the ongoing research and development of this novel technology.”

GizmoCrazed - March 12, 2012 0
From it's start, Internet scams were pretty much there to take advantage of innocent internet users who had no idea that they could be...

HP Powerup Backpack lets you charge your devices on the go

Here Are 10 Hacks To Make You Sleep Better This Summer