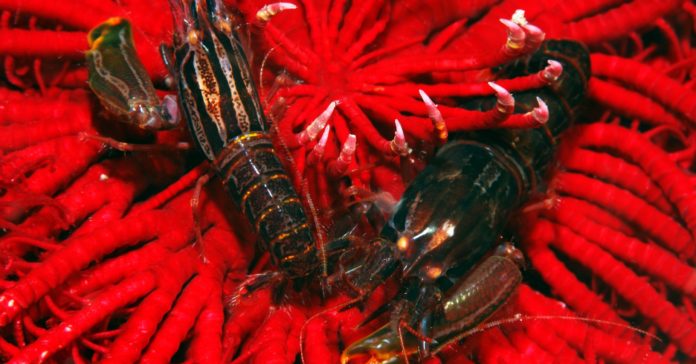 The pistol shrimp, aka the snapping shrimp, is a peculiar contradiction. At just a few inches long, it wields one proportionally sized claw and another massive one that snaps with such force the resulting shockwave knocks its prey out cold. As the two bits of the claw come together, bubbles form and then rapidly collapse, shooting out a bullet of plasma that in turn produces a flash of light and temperatures of 8,000 degrees Fahrenheit. That’s right—an underwater creature that fits in the palm of your hand can, with a flick of its claw, weaponize a blast of insanely hot bubbles.

Now scientists are learning how to wield this formidable force themselves. Today in the journal Science Advances, researchers detail how they modeled a robotic claw after the pistol shrimp’s plasma gun to generate plasma of their own. That could find a range of underwater uses, once scientists have honed their version of one of evolution’s strangest inventions.

If all the pistol shrimp has is a plasma-blasting hammer, all the world indeed looks like a nail. It uses its claw to hunt, sure, but also to communicate with short snaps that measure an insane 210 decibels. (An actual pistol shot produces around 150 decibels.) Some species even use the plasma blasts to carve out bits of reef for shelter. The result is a seafloor that’s so noisy, it can actually interfere with sonar.

Texas A&M mechanical engineer David Staack figured that versatility might come in handy for humans as well. His team began by getting ahold of some live pistol shrimp. Like other arthropods, these animals periodically molt, shedding their exoskeletons as they grow. Those exoskeletons gave Staack a nice little cast of the claw, which he then scanned to create a detailed 3D model. This he sent off to Shapeways, the commercial 3D printing service, and got back a plastic version of the pistol shrimp’s plasma gun.

This allowed Staack to experiment with the unique structure of the limb. The top half of the claw, which the shrimp cocks back and locks, includes a “plunger,” which slams into a “socket” in the lower half of the claw. This creates a fast-moving stream of water that produces bubbles, also known in this situation as cavitation.

“That reminded us of a mousetrap,” he says. “So we actually did some experiments where we put some mousetraps underwater just to see how fast the little arm would spin as you triggered it. We took that mousetrap idea and applied it as a way to snap the claw shut.”

In Staack’s version of the claw, its top half rapidly spins on a spring-loaded rod, creating enough force to slam the plunger into the socket. This action generates a high-velocity stream of water that in turn produces a cavitation bubble, which initially is low pressure and relatively large. But then it begins to collapse.

Shockwaves from the snapping of the robotic claw.

The incredibly powerful snap produces a cavitation bubble that collapses and emits light.

In the lab, the researchers used high-speed cameras to observe the jet of water erupting from their claw. They also imaged the resulting shockwaves, capturing the flash of light as the plasma forms.

The pistol shrimp doesn’t have a monopoly on underwater plasma generation. People weld underwater using plasma, known as plasma arc welding, which produces intense heat. And researchers can also make plasma in water with lasers. The problem is, those means are inefficient. Using the claw to generate plasma is 10 times more efficient than those previously explored methods, according to Staack. It will, though, require more development to scale.

It may well become even more efficient, because the researchers need not faithfully follow the biology of the pistol shrimp. In fact, Staack realized they could trim down the size of the upper bit of the claw. In the actual pistol shrimp, it’s bulbous because it holds the muscles required to operate the limb. But this robotic version isn’t constrained by that biology.

“Replicating what the animal has done is the first step,” says Stanford University biologist Rachel Crane, who helped develop Ninjabot, a device that replicates the strike of the mantis shrimp, which similarly produces cavitation bubbles. “Then you can look at that and figure out, yeah, I don’t need a giant muscle, and so I can cut this part out. Then you can engineer a better system.”

Researchers might even want to look back to nature for ways to tweak the system. Hundreds of species of pistol shrimp are snapping away out there in the sea, each with its own uniquely adapted claw. That and even individuals within a species vary in their morphology.

“The substrate for evolution, the only reason we have snapping shrimp of all these different varieties today, is because of individual variation,” says Duke biologist Sheila Patek, who studies the strike of the mantis shrimp. So while the researchers can make their own tweaks to their claw robot, they can also draw inspiration from the inherent diversity of pistol shrimp to play with claw morphologies other than the one they originally 3D printed.

That diversity may one day see a pistol-shrimp-inspired device used in a range of fields. One approach would be to use claw-generated plasmas to drill through rock, as the crustacean does out in the wild to make a home in a reef. Or you might use the system for water purification by breaking up water into its constituent parts, which forms a peroxide. “These peroxides can then attack organic contaminants in the water,” Staack says. “If you’re thinking about cleaning municipal water or cleaning wastewater, efficiency becomes very important.”

And so the pistol shrimp finds a few more nails.