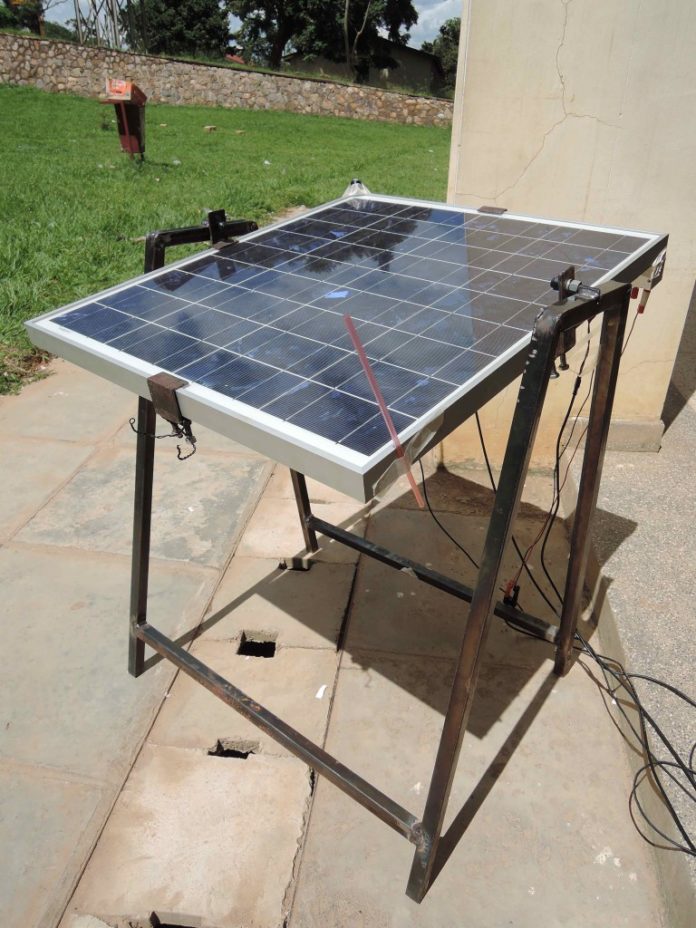 The simple frame that allows a solar panel to track the sun and increase energy production. Buckets would hang from either side. (Credit: Beth Parks)

Rare is the tech story whose main development is decidedly low-tech – but not impossible. Rather than a fancy atomic clock or rat cyborgs, for instance, this tech story deals with buckets of rocks and water. Well, solar panels too, but that’s not the cool new part.

Today, at a meeting of the American Physical Society, Colgate University physicist Beth Parks described a new way to wring even more energy from a solar panel — a major development for people with no access to reliable power, such as those in developing countries or folks who live off-the-grid. Rather than install the panel in a stationary position, Parks helped come up with a rotating frame that allows the panel to follow the sun as it traverses the sky.

Here’s where that high-tech equipment comes in. Rather than use motorized components, Parks’s solar panel rig moves thanks to the power of gravity, using a bucket of rocks and a bucket of water. The former, a stationary weight, hangs off the west side of the rig. Counterbalancing it, on the east side, is the water — but, this bucket has a leak in it.

When it’s heavier, in the morning, it outweighs the rocks, so the solar panel points east, toward the sun. In the evening, after leaking all day, the bucket is lighter than the rocks, so the panel points westward, toward the sun. And in between, Parks got the panel to roughly follow the sun from east to west by controlling the rate of leaking water (a phenomenon familiar to any calculus student).

It’s the kind of idea that’s so simple, it really works. Over 20 random days of testing, the bucket-powered solar cell collected 32 percent more energy than a stationary setup nearby. That’s nearly a third more energy, all thanks to a couple of buckets!

Parks came up with the idea, and tested it, during a year in in Uganda, where she worked with students at the Mbarara University of Science and Technology. They were careful to make the frame itself simple enough for local welders anywhere in the world to create.

Parks also calculated that the total cost of her setup — including the panel itself, a charger and the rotating frame (buckets not included I guess) — was about 10 percent less than the equivalent for a standard rooftop setup. So not only does this new design capture more energy, it actually costs less to use it.

Parks hopes her design can help people who live without reliable access to electricity (as about 70 percent of Ugandans do), where just keeping a phone charged and the lights on can involve long treks and hazardous conditions. With any luck, households and small businesses the world over might now have cheaper access to more energy.

And, not insignificantly, it’s an energy-efficient means of exploiting clean, renewable solar power. So it turns out this rare kind of low-tech tech story is also that rare environmental story — the kind with a happy ending.

NASA’s InSight Mars lander will gaze (and drill) into the depths...

GizmoCrazed - May 3, 2018 0
NASA’s latest mission to Mars, InSight, is set to launch early Saturday morning in pursuit of a number of historic firsts in space travel...

The Definitive Guide to Laser Cutting Manufacturing and How it Works

2 guys named their company Steve Jobs Inc. — and got...