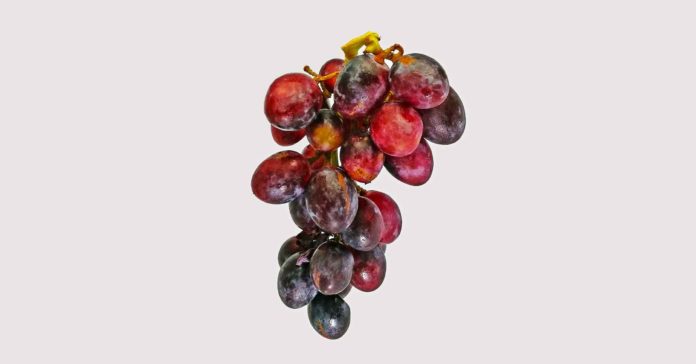 The internet is full of videos of thoughtful people setting things on fire. Here’s a perennial favorite: Cleave a grape in half, leaving a little skin connecting the two hemispheres. Blitz it in the microwave for five seconds. For one glorious moment, the grape halves will produce a fireball unfit for domestic life.

Physicist Stephen Bosi tried the experiment back in 2011 for the YouTube channel Veritasium, in the physics department’s break room at the University of Sydney. On camera, he and the show’s host whooped in the glow of the grape. “Who needs drugs?” Bosi yells in the video, as a particularly psychedelic plume erupts. Off-camera, they discovered they had burned the interior of the physics department microwave.

It’s a crowd pleaser, as long as you avoid melting your kitchen appliances. But it turns out, even after millions of YouTube views and probably tens of scorched microwaves, no one knew exactly why the fireball forms. Popular online explanations usually say that the grape halves act like an antenna, and they somehow direct microwaves onto the small bridge of skin to ignite the initial spark. But nobody had actually done the math to prove it. After several summers of microwaving grape-shaped objects and simulating the microwaving of those objects, a trio of physicists in Canada may have finally figured it out.

The physicists point out that people have let themselves be distracted by the fireball: It’s “exciting and memorable” but “of secondary interest,” they write in a paper that appears today in the Proceedings of the National Academy of Sciences. The fireball is merely a beautiful, hot blob of loose electrons and ions known as a plasma. The most interesting science is contained in the steps leading up to the plasma, they say. The real question is how the grape got hot enough to produce the plasma in the first place.

So they revved up their microwave, grape after grape. They made grape replicas out of plastic beads soaked in water. They figured out a way to microwave the grape and its replicas right to the brink of plasma formation, but never letting the sparks actually fly. They even replaced the door to their microwave with a more transparent mesh so they could film the grapes more clearly.

The grape, incidentally, is the perfect size for amplifying the microwaves that your kitchen machine radiates. The appliance pushes microwaves into the two grape halves, where the waves bounce around and add constructively to focus the energy to a spot on the skin. Both grape halves happen to focus the energy to the same tiny point. That intense energy jostles the atoms and molecules at that spot, heating them up so much that they can no longer hold onto their electrons, which turns them into a plasma—and boom, fireball.

A common misconception is that the microwave acts on the grape from the outside in, like frozen meat defrosting, says physicist Pablo Bianucci of Concordia University, who worked on grape simulations included in the paper. Instead, it’s important to think of the microwave interacting with the grape as a whole, with the wave entering the fruit and bouncing around its confines like an excited puppy.

They also found that the shape of the two grape halves and the little bridge of skin connecting them is not important. You can make the fireball by microwaving two whole grapes sitting side by side, for example. And it doesn’t even need to be a grape. “Anything grape-sized will work, if it’s watery enough,” says physicist Hamza Khattak, a graduate student at McMaster University who did much of the microwaving. They demonstrated this point by making fireballs out of microwaved gooseberries, large blackberries, and even quail eggs.

But it wasn’t just snack time for these physicists. The work has more serious applications too, Bosi says. His experiments with grape balls of fire began and ended with the 2011 YouTube video, but his curiosity did not. “I’m impressed with the scientific depth of the paper,” wrote Bosi in an email. In particular, he notes that authors came up with mathematical rules for describing the grape hotspot. They could conceivably shrink these rules to a smaller scale, to create similar hotspots in nanoparticles, for example. Scientists use heated nanoparticles to make very precise sensors or to facilitate chemical reactions, says Bianucci.

Still, the case isn’t completely closed. During all their microwaving, they noticed that two grapes placed side by side repeatedly bump into each other, back and forth. They don’t know why that happens, and they’ll be studying that next, says Bianucci.

For those studies, they’ll probably stick with the plastic grape replicas, rather than the fruit. “That’s because they don’t go bad,” says Khattak. Maybe they could try raisins.