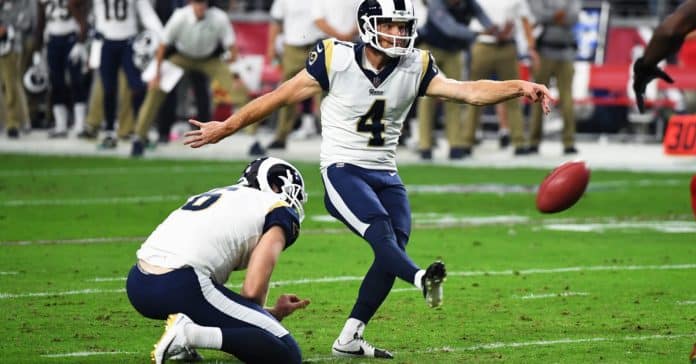 Whether you’re rooting for the New England Patriots this weekend or the Los Angeles Rams, some of the tensest moments of Super Bowl LIII will likely come when a kicker stares down the field, breaks into a sprint, and plants his foot on the ball, sending it arcing towards the field goal in hopes of scoring a few precious points. Those slowed-down moments of the game, in the high-stakes environment of football’s championship event, are when a little sports psychology can go a very long way.

Any team wants its star kicker to display great range and accuracy. But that’s not enough without an exceptional mental game to match. Both teams heading into this year’s Super Bowl are well-equipped in this department. The Patriots’ Stephen Gostkowski is among the NFL’s most consistent and prolific placekickers. Not only is he New England’s all-time leading scorer, he’s also the league record-holder for most consecutive extra points (523, counting postseason performances).

Rams kicker Greg Zuerlein, meanwhile, may well possess the most powerful leg the game has ever seen; his nigh-ballistic feats from beyond the 50-yard-line have made him a tremendous tactical asset, while earning him nicknames like “Legatron” and “Greg the Leg.” Truth be told, the Rams might not be Super Bowl-bound, were it not for Zuerlein and his prodigious lower limb: Earlier this month, when his team faced the New Orleans Saints in the NFC Championship, it was a 48-yard field by goal by Zuerlein that sent the game into overtime with seconds left in regulation, and, minutes later, his cracking 57-yarder that won the game.

That overtime kick, which looked like it could have been good from 70 yards, was the longest game-winning kick in NFL playoff history. But just as impressive as Zuerlein’s phenomenal range was his ability to post that record-setting yardage in the face of defeat. He could have choked, but he didn’t—and at a competition like the Super Bowl, that might be the most desirable quality of all.

“Every athlete has on days and off days, but choking, cracking under pressure, that’s different,” says cognitive scientist Sian Beilock, president of Barnard College and author of Choke: What the Secrets of the Brain Reveal About Getting It Right When You Have To. “When I say ‘choking,’ I mean the person delivers a worse performance than you would expect, given their skill level, because of the anxiety they’re experiencing due to their situation.”

Ironically, your propensity to choke might vary according to your abilities—and not necessarily the way you might think. In a study recounted in The Quarterly Journal of Experimental Psychology, Beilock observed that skilled golfers putted more accurately when they were instructed to putt quickly, whereas novice golfers performed worse. Strangely, asking the golfers to take their time produced the opposite effect. “When experienced athletes start thinking too much about the details of their performance, that’s actually when they mess themselves up,” Beilock says.

One interpretation of Beilock’s finding is that the better a person becomes at some skill—whether it’s putting, kicking a field goal, or tying their shoes—the more automatic that skill becomes. She also suspects that switching an expert off of autopilot can throw them off their game.

By meddling with the amount of time at the expert golfers’ disposal, Beilock was interrupting their flow and upping the odds that they’d choke. That’s the same idea behind a tactic known in football as “icing,” whereby the defending team’s coach calls a timeout right as the offensive kicker is attempting a high-stakes field goal. That’s precisely what New Orleans Saints head coach Sean Payton tried to pull on Zuerlein, at the NFC championship: The first time the Rams’ kicker lined up for his game-winning attempt from 57 yards, Payton called a TO, hoping the gravity of the situation would sandbag some of Zuerlein’s range or throw off his accuracy.

But the ice attempt failed. On his second go of it, Legatron, true to his name, sent the ball soaring through the uprights, won the game, and secured his team’s spot at the Super Bowl.

That’s the funny thing about icing kickers: Sometimes it backfires. While some data suggests interrupting a kicker’s flow in high-stakes scenarios can reduce their accuracy from long range, when University of Chicago behavioral economist Tobias Moskowitz analyzed high-pressure field goal attempts between 2001 and 2009, he found that kickers who were iced with fewer than 15 seconds on the clock tended to be more accurate, not less so.

So when should coaches ice the opposition? Hard to say. The tactic’s effectiveness remains an active area of debate, with statisticians turning to other variables—like weather, game location, and which team calls the timeout—in their analyses.

But the most important variable of all might be who’s being iced. Some kickers are probably just better under pressure. Perhaps Zuerlein is such a kicker.

Even if he is, everyone misses eventually, even preternaturally consistent performers like Gostkowski. Between 2012 and 2016, the Patriots kicker made 53 out of 53 of his postseason kicks. But going into Super Bowl LIII, he’s missed six kicks in his last nine playoff games.

That kind of hiccup can get inside a player’s head. Beilock’s advice? “What he shouldn’t do is dwell on his recent misses,” she says. “You want him to be thinking about his consistency over the years, his top performances, and then to go out there and do it. And I would remind him: He has a track record of success. This is gonna be no sweat.” A mistake would be to start over-analyzing his mechanics of his kick, or dwelling on the stakes—even if they don’t get much higher than his sport’s championship event.

As for whether he should practice being iced? “I mean, I think everyone should.”