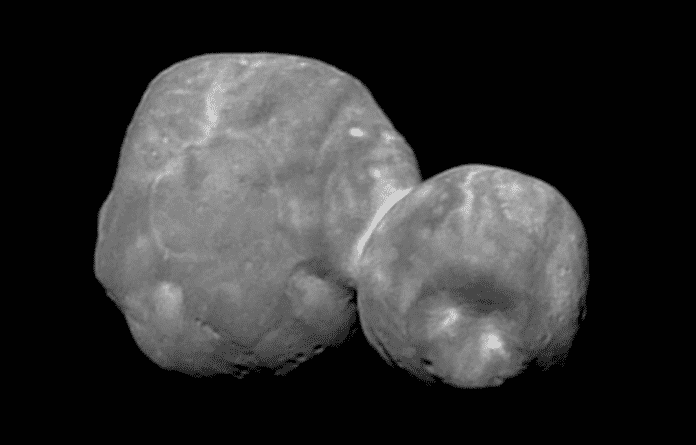 The best-yet view of MU69 (aka Ultima Thule) from New Horizons, showing craters and intriguing hints of layering. The larger lobe appears to have a thick-pancake shape. Even sharper views are still stored in the solid-state memory aboard the spacecraft. (Credit: NASA/JHUAPL/SwRI)

It was a New Year’s Eve like no other. First of all, the big celebration started a half hour after midnight. Children were waving mini-flags, surrounded by throngs of giddy planetary scientists. And four billion miles away, one billion miles past Pluto, the New Horizons spacecraft was flying past an enigmatic object called 2014 MU69–better known by its nickname, Ultima Thule.

When radio signals from New Horizons finally reached Earth the next morning, they revealed that the mission was a smashing success. The first images of MU69 showed that it is a double-lobed object, apparently created from the delicate joining of two primitive planetary building blocks, or planetessimals. It was everything the mission scientists had hoped for. The only thing that felt off about the triumphant event was the object’s name: not only because some people objected to the Nazi mythology attached to Ultima Thule, but because of the name’s literal meaning of “beyond the known world.”

The moment that New Horizons reported back, MU69 became part of the known world. The probe had lived up to its name, pushing back the horizon of human understanding, so that it can be pushed back farther, again and again, in the future. There is no final frontier anywhere in sight, and that is what truly made the New Year’s encounter so exciting.

Since January 1, data have been flowing in from New Horizons at a slow trickle. The data rate from its current location in the far-outer solar system is no more than 2,000 bits per second under optimal conditions, according to mission operations manager Alice Bowman. The full download will take 20 months. Still, we already have enough in hand to begin the knowing process.

The early, medium-resolution released just after the encounter showed that the larger lobe of MU69 is about three times the size of the smaller one. Both have similar reddish colors, similar to that of the north polar cap on Pluto’s moon Charon. The most likely interpretation is that MU69 is covered in frozen methane and other organic ices that havy e been chemically altered by billions of years of radiation into a coating of tholins–a catch-all term given to a complex brew of organic solids.

All of those initial discoveries fit in with our understanding of the outer solar solar system as a place that is rich in water and carbon compounds. To be clear, objects like MU69 were not directly connected to the formation of the inner planets, so we cannot credit them with making Earth the habitable world that it is today. MU69 is much more directly connected with the formation of the giant outer planets; they in turn were responsible for doing much of the chemical stirring in the early days when the Sun and its planets were beginning to take shape.

Part of what makes MU69 so fascinating is precisely the fact that it did not participate fully in the planet-building process. Instead it is a survivor, a relic that formed in place and largely stayed in place even as Neptune and Uranus migrated around and scattered wide swaths of the outer solar system, erasing parts of its history. MU69 is classified as a cold classical Kuiper Belt Object–cold in the dynamical sense, meaning that it was never much disturbed and remains in its original, fairly circular orbit around the distant Sun.

Think of MU69 as an entry in a parent’s baby journal, describing what the solar system was like right at the time of its birth. Everything in the inner solar system has been battered and cooked during the intervening eons. Some comets hail from the same cold, primitive region as MU69, but we have seen them only after they have approached the Sun and sprouted tails–another form of destructive cooking. MU69 is one of a kind (for now), the only journal entry in which we can still read all of the words.

The rotation of MU69, seen as New Horizons closed in. Every aspect of this little snowman contains information about conditions in the early solar system. (Credit: NASA/JHU-APL/SwRI)

One of the great puzzles about planetary formation is how the clouds of gas and dust circling a newborn star give rise to the planetessimals that then accumulate into protoplanets, and eventually into the final planets themselves. Obviously the dust grains stick together, accumulate, build up. But how that works, exactly, is understood only in the most hand-wavy way.

The beginnings of some answers are starting to come into focus as more information arrives from New Horizons. The latest image (the one at the top of this post) is far more detailed than the one released the day after the flyby. At first, mission leader Alan Stern and the rest of the team was uncertain how to interpret MU69’s vaguely defined bulges and depressions. In the new view, it’s absolutely clear that some of the topography on the object is due to impact cratering. Those craters provide an indirect record of the smaller objects still circling around in the Kuiper Belt, remnants from the enigmatic stage between bits of dust and planetessimals the size of MU69, which is about 30 kilometers long.

Also evident in the new image are signs of layering, suggestive of the way various smaller objects came together to form the two lobes before they in turn came together. The prevailing theory is that the lobes formed as separate objects in close proximity, with scattered debris and mini-moons around them. Those surrounding objects helped siphon off angular momentum, allowing the two to spiral together until they made contact and continuing to drag on them until the combined object reached its current rotation rate of 15 hours (much slower than they would have been moving at the moment of contact).

If all of this seems like the scientists are obsessing over minuscule details, that is entirely correct. Detail is exactly what’s missing from the current theories of planetary formation. Every bump and lump on MU69 will fill in some of the gaps in that theory. The best images, yet to arrive, will be four times sharper. There will be views taken from the side, showing deep shadows that clarify the exact shape of MU69. There will also be spectroscopic data that will reveal much about the surface composition, showing how the parts of MU69 came together and how they swept up the small bits of solar system material around them.

As Marc Buie, a co-investigator on the New Horizons team, told me at the end of a big science briefing following the flyby, “This is like the Holy Grail for understanding where we’ve come from. It’s going to revolutionize our view of how this whole process works.”

Despite invoking the Holy Grail (the scientist’s go-to metaphor for a final, clinching piece of evidence), Buie and the rest of the team do not see MU69 as anything like an endpoint. Stern is gearing up for another New Horizons encounter that will happen…in March. This one will not be a close visit as with MU69, but rather a long-distance reconnaissance of a Kuiper Belt Object called 2014 PN70. Then next year the team may propose to NASA a plan to do a proper, up-close flyby of another body in the Kuiper Belt, assuming they can find a suitable target.

And then? New Horizons will keep scouting out the Kuiper Belt and the interstellar medium, following in the footsteps of Voyagers 1 and 2. We don’t know yet what will come after that. A Pluto orbiter? A multi-part mission to assess more of the Kuiper Belt? There are many ideas and many options on the table. Budget and scientific priorities will determine which ones come to fruition. All we know for sure is that Ultima Thule is not the endpoint.