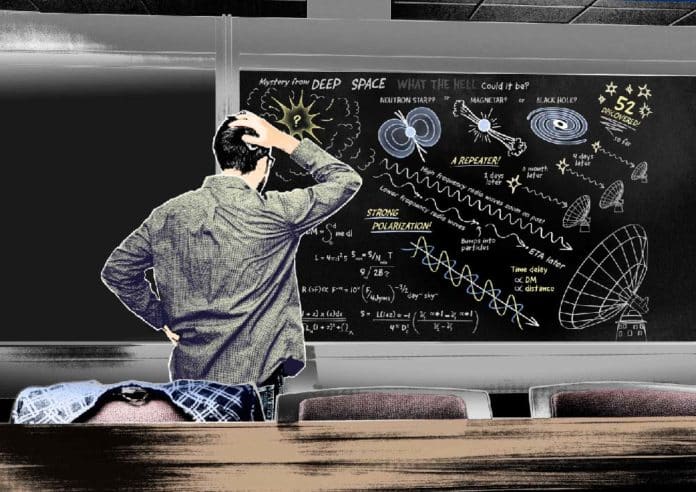 Flashes of Light
Already, that growing snowbank of data has produced some surprises. The latest twist in the FRB story came from a project at the Australian Square Kilometer Array Pathfinder (ASKAP) radio telescope in October, when astronomers announced the discovery of 20 bright FRBs, nearly doubling the total number known at the time.

“We chose 50 [locations] all over the sky very carefully and hammered them for hundreds of hours of observing to see if we could find another repeater,” says Keith Bannister, one of the scientists involved in the survey. None of the 20 repeated — but that wasn’t the big deal.

When the ASKAP team compared its FRBs with others from Parkes Observatory, it found an interesting connection. The ASKAP FRBs were all brighter but had lower DMs, meaning they were all closer as well. This makes sense: On a foggy night, a flashlight that’s closer appears brighter. You could even measure how far away it is by studying its relative brightness. ASKAP’s data showed that FRBs follow the same pattern.

But imagine if you saw a flashlight at a distance you knew precisely, but it appeared much fainter than it should have. If nothing else had changed, you’d wonder if you were looking at a second, different flashlight. The repeater, FRB 121102, is that second flashlight: While all non-repeating FRBs appear to follow the same pattern in DM and brightness that ASKAP established, the repeater appears far fainter than expected at its DM.

This has left many astronomers scratching their heads. Could different phenomena create one-off and repeating FRBs?

“Whether all FRBs are the same is really an open question,” says Bannister. “I try not to be opinionated as a scientist; I like to just go off and measure. But . . . my gut feeling is we end up finding two versions [of FRBs].” It wouldn’t be the first time astronomers turned one discovery into two. (See “Out of One, Many,” below.)

Mysterious Messengers
For every answer about FRBs, the data have provided us with several new questions. Do they all repeat? Is there any pattern in the repetition? Are they all even the same type of phenomenon? “There are more theories than bursts,” Lorimer would quip before the recent flood of FRBs, “and nobody knows for sure.”

Kaspi goes even further. “I’m very puzzled by it,” she says, “and I think there’s a lot of possibility, including things that we can’t imagine right now.” Perhaps young neutron stars are more energetic than anyone expects, or maybe FRBs involve physics we don’t understand, or the bursts could require conditions so rare that it turns out nothing in our galactic neighborhood sets them off. Extraordinary claims, of course, require extraordinary evidence, but FRBs definitely fit that bill.

Even better, FRB signals, regardless of what causes them, may be useful in deciphering mysteries about the universe, thanks to the vast distances they travel. New research suggests the bursts could be a new way to learn about the relatively unstudied and sparse material that lies between galaxies by studying the dispersion measures they cause. Researchers may even detect the existence of magnetic fields out there, a phenomenon about which we currently know almost nothing.

Despite all the lingering questions, at least one thing is clear: The FRB era of astronomy has arrived.