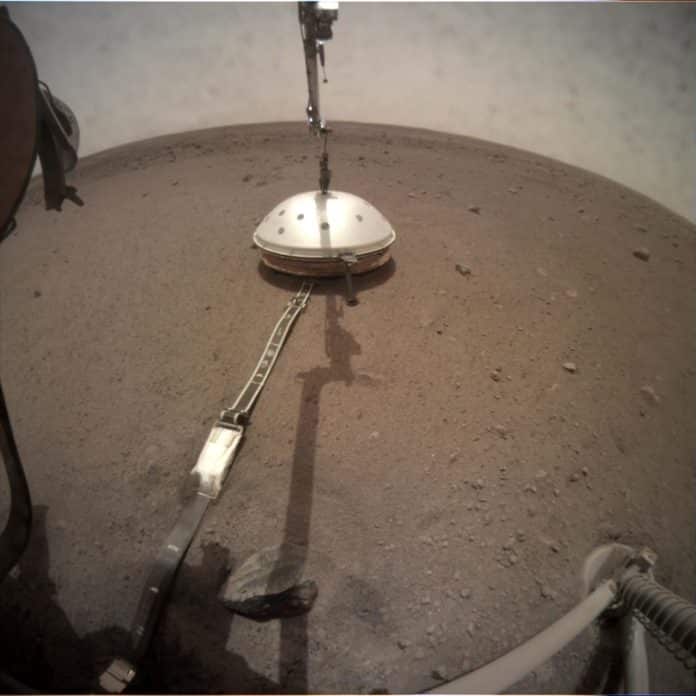 NASA’s InSight lander tucked its seismic instrument under a shield to protect it from wind and extreme temperatures. (Credit: NASA/JPL-Caltech)

Since InSight’s landing on Mars late last year, it’s been hard at work studying what lays beneath the surface of the Red Planet. The lander’s mission is to understand Mars’ deep interior, what it’s made of and how the planet moves. To that end, InSight has been studying the area around it, practicing its movements, and scouting the best locations to place instruments. And now, the science is kicking into gear.

To accomplish its mission, InSight needs to place a few instruments on the surface and then monitor them. The lander has two main instruments it has to re-home: the Heat flow and Physical Properties Package (HP3) and the Seismic Experiment for Interior Structure (SEIS). The first will measure temperatures underneath Mars’ surface, while the latter will listen for subtle Mars-quakes. InSight also carries a Rotation and Interior Structure Experiment (RISE), but this will remain riding piggy-back on the lander for the duration of the two-year mission.

At first, InSight was busy scouting its new home, taking pictures and talking with researchers on Earth so its team could figure out exactly where to place the various sensors. While the mission will continue long after the instruments are placed, InSight’s biggest decisions come now, as the team decides on locations and InSight uses its robotic arm to move around very delicate equipment.

The lander has been steadily relaying pictures of its activities, and enterprising redditor Konrad Iturbe has been compiling them into stop-motion gifs. Put together, the sequences illustrate the first months of InSight’s residence on Mars as it looks around and begins to build its research station.

InSight’s first days were full of practice, making sure its cameras and robotic arm all worked as planned. (Credit: NASA/JPL-Caltech; Konrad Iturbe/@konrad_it)

On December 19, InSight placed SEIS on the ground. It then spent a few weeks leveling the instrument so it was in the best possible position to record information from deep underground.

InSight’s first big move was placing its seismic instrument in just the right spot. The view here is from the robotic arm. (Credit: NASA/JPL-Caltech; Konrad Iturbe/@konrad_it)

After placing the seismic instrument, InSight had to carefully adjust its placement so it could take the best possible readings. This view is shown from the main lander camera. (Credit: NASA/JPL-Caltech; Konrad Iturbe/@konrad_it)

More recently, InSight carefully placed a cover over the instrument. This cover protects it from Mars’ extreme temperature swings as well as from winds that might shake the delicate instrument. With this shield in place, SEIS can start taking data, and should begin returning information soon.

Over the next few weeks, InSight will also place HP3, which will then take about 40 days to slowly burrow 16 feet underground to conduct its readings.

GizmoCrazed - July 1, 2011 0
The world's most popular game, Angry Birds, is now available on Windows Phone 7 platform, Rovio has announced. The game was expected to be...