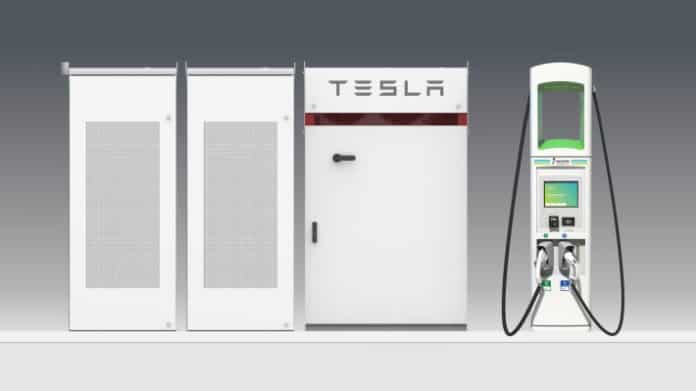 Electrify America, the entity set up by Volkswagen as part of its settlement with U.S. regulators over its diesel emissions cheating scandal, plans to install Tesla Powerpack battery systems at more than 100 of its electric vehicle charging stations this year.

Electrify America aims to use the Tesla Powerpacks to offset the cost of charging for customers. Owners of electric vehicles face high costs if they charge their vehicles during peak demand hours. The Tesla Powerpack battery systems store energy drawn from the grid during off-peak hours. That stored energy can then be used during peak demand hours when charging costs are higher. Each site will consist of a 210 kW battery system with roughly 350 kWh of capacity, according to Electrify America.

“Our stations are offering some of the most technologically advanced charging that is available,” Electrify America CEO Giovanni Palazzo said in a statement. “With our chargers offering high power levels, it makes sense for us to use batteries at our most high demand stations for peak shaving to operate more efficiently. Tesla’s Powerpack system is a natural fit given their global expertise in both battery storage development and EV charging.”

Electrify America has committed to investing $2 billion over 10 years in clean energy infrastructure and education. The VW unit expects to have 484 electric vehicle charging stations with more than 2,000 charging dispensers installed or under construction by July 1.

The company will begin the next phase of installations this summer.

Electrify America’s bet on Tesla battery systems illustrates the deep need for electric vehicle charging infrastructure that is low cost, easy to access and as fast as possible. It’s not enough to simply dot highways and urban areas with public chargers.

The deal also represents a small, yet possibly fruitful area for Tesla as it tries to grow its energy storage business.

Electrify America says it has designed its sites and electrical systems to enable future upgrades. Fast charging is part of that vision. The Electrify America charging system features liquid cooled-cable 350 kW chargers.  These chargers — which currently no EV can actually use — can theoretically charge a vehicle at speeds up to 20 miles per minute – seven times faster than today’s most commonly used 50 kW fast chargers.

Porsche Taycan, the automaker’s first all-electric vehicle, is designed to have an 800-volt battery that can take a 350 kW charge. The Taycan is coming out late this year.

Electrify America’s charging locations will have an average of five charging dispensers, with some having as many as 10. The highway stations will have a minimum of two 350 kW chargers per site, with additional chargers delivering up to 150 kW.

How Quantum Mechanics Lets Us See, Smell and Touch

GizmoCrazed - October 25, 2018 0
What happens next isn’t quite clear. We know the molecules bind to some of the 400 different receptors on the surface of the olfactory...

Even Pills Are Going Digital