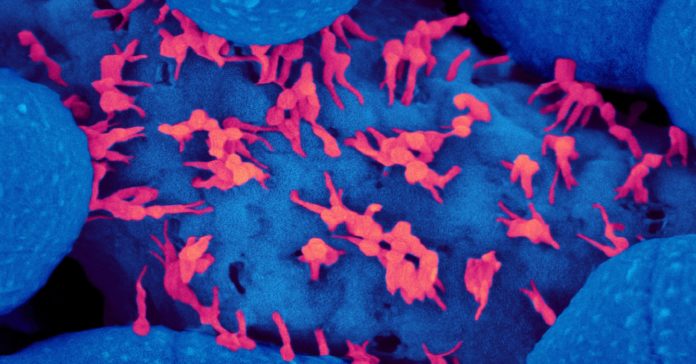 In November 2015, infectious disease epidemiologist Steffanie Strathdee and her husband, evolutionary psychologist Tom Patterson, were spending the week of Thanksgiving exploring pyramids and pharaoh’s tombs in Egypt when Patterson came down with what seemed like a nasty bout of food poisoning aboard their cruise ship. But as his condition rapidly deteriorated and he had to be emergency medevac’d, first to Germany and then to the medical center at UC San Diego, where both scientists were on staff, blood and imaging tests revealed why Patterson’s body was failing. A soccer-ball-sized cyst in his abdomen was infected—teeming with one of the most dangerous, antibiotic-resistant bacteria in the world.

Thus begins The Perfect Predator, the gripping true tale of one scientist’s crusade to save her husband’s life by resurrecting a centuries-old Soviet cure largely ignored by Western medicine. One part medical mystery, one part personal memoir, the couple’s first book chronicles Strathdee’s frantic attempts to recruit researchers willing to try phage therapy—a cocktail of viruses that prey on bacteria—on Patterson, as he slipped in and out of septic shock and eventually into a coma.

Strathdee and Patterson sat for an interview to talk about the experimental treatment that brought him back from the brink of death, and how it has galvanized scientists and doctors in the US to take a harder look at phage therapy as a potential solution for the coming era of superbugs.

WIRED: Steffanie, before Tom got sick, had you ever heard of phage therapy?

SS: No. I came across it late one night on PubMed [a free, public search engine for biomedical journal articles] along with a number of other alternative therapies for superbug infections. I knew from my college microbiology classes that phages were viruses that prey on bacteria but I didn’t know they had ever been developed for therapeutic purposes. And I thought wow, they’ve been used for decades in the former Soviet Union and it was like, “why aren’t they being used here?”

WIRED: Well, why aren’t they?

SS: There was a couple things going on. First the main discoverer of bacteriophages, Felix d’Herelle, was a difficult guy. He tended to tick people off. And because he was a ‘vagabond scholar’ with no formal training, some of the people he sparred with, including some Nobel laureates in the West, really had it out for him. The other part was that phage therapy was taken up vigorously by the former Soviet Union, the Republic of Georgia, and Poland. It was discovered before the arrival of modern antibiotics and persisted after because access to penicillin was very hit-or-miss there at the time. So Stalin and others embraced phage therapy as a pillar of the Soviet approach to health. And because of that the West really looked down on it. If you were a supporter of phage therapy in the US you were labeled a pinko commie. It’s actually a fascinating story about how geopolitical bias creeps into science; the fact that this was seen as Soviet science really colored Western views of phage therapy for decades.

WIRED: So how did you convince Tom’s doctors that this approach was worth trying, given its tumultuous history?

SS: You know, we’ve become risk-averse in our approach to medicine, especially in the US, because of litigation—the whole worry that if we try this experimental treatment and the patient dies, they’ll sue us. But in this case we were fortunate to be at UC San Diego, a teaching and research hospital, where everyone knew that Tom was going to die unless we did something drastic. Some people said he would have died within a few hours, if we hadn’t initiated phage therapy when we did.

WIRED: You wound up working with researchers at Texas A&M University and the US Naval Medical Defense Command to acquire three different phages capable of attacking the acinetobacter infection. Tom, when did you first learn that you were the subject of this grand experiment?

TP: It was when I came out of the coma I’d been in for more than two months. I turned to Steff, and said, “What have I missed?” And she said, “Well, Donald Trump is the presumptive candidate for President of the United States. And we cured you with viruses from a sewer in Texas.” I thought surely I must be hallucinating again!

SS: We had to tell him over and over because he wasn’t able to retain much information at that point. It all just sounded so fantastical.

WIRED: What do you think of it now that you’ve had some time to reflect on your experience as a guinea pig?

TP: Steffanie and I met from our work as AIDS researchers, and in that world, viruses are always viewed as the bad guy. So it was a real transition to think that viruses could do good. But now I can really appreciate them from an evolutionary standpoint. I view this whole battle that took place in my body much like the Serengeti Plain. The bacteria are the herds of wildebeest, and they expanded too much, eating up all the grass because there weren’t enough predators around. The predators in this case are the phages, so I like to think of them as lions. Our collaborators had to go out and find the lions. You couldn’t just take a snow leopard and drop it into that environment and expect it to eat wildebeest because it’s evolved to prey on something different.

SS: That’s what’s really cool. Our best estimate is that there are 10 to the power of 31 phages on the planet—10 million trillion trillion. And they’ve all evolved to attack different bacteria. One day we might know enough about phages to use them to groom the microbiome, to weed out not just antibiotic-resistant bacteria, but other kinds of bugs too. Most experts say we don’t yet know enough about the phageome to pull that off, but it’s the future.

WIRED: In the meantime though, you’ve been working to more rigorously test phage therapy for serious infections here in the US. What’s the latest with that?

SS: It’s been moving very quickly. After Tom’s case was publicized in April of 2017, we received funding to start North America’s first center devoted to better understanding the role of phage therapy for treating superbugs. It’s at UC San Diego, called IPATH, for Innovative Phage Applications and Therapeutics, and we now have two clinical trials in the works. One is for people with ventricular assist devices who tend to get infected with biofilm-forming bacteria, which are difficult for antibiotics to penetrate. And the other is for cystic fibrosis patients who develop resistance to the drugs that keep them alive by fighting off chronic lung infections.

They’re small trials, but they’ll help answer a lot of the questions we still have at the end of Tom’s case. Like, what happened to all the phages we injected into him? Where did they go? Did his immune system have any pre-existing antibodies? What’s the right dose? These sorts of things will help inform bigger trials and help phage therapy into the mainstream and not something that was just whispered about between scientists in university hallways.

TP: We’re very conscious that we were given resources and had connections a lot of people don’t have. That position of privilege allowed us to emerge relatively unscathed from this nightmare. We want to help ensure that in the future, the estimated 1.5 million people who die every year from superbug infections have more resources at their disposal as a result of our story.

GizmoCrazed - October 5, 2017 0
(Credit: Shutterstock) Paying a higher price for something is typically associated with positive benefits. When you shell out more for a thing, you feel it’s...