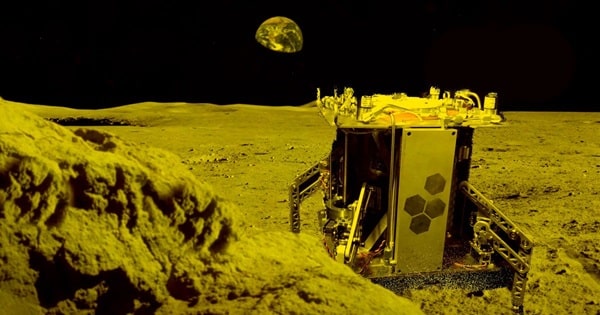 The World is Not Enough (WINE) is a prototype spacecraft that will harvest water from targets and use that water to create steam that it will use as fuel.
(Credit: University of Central Florida/Video Blocks/Victor Tangermann)

Thanks to a mashup of science and industry, researchers have developed a prototype spacecraft that can mine water from an asteroid, use that water to generate steam, then use that steam as fuel to hop across the surface of an asteroid — or even jump to an entirely different world altogether.

The prototype spacecraft — named The World Is Not Enough (WINE) — was largely developed by Honeybee Robotics in Pasadena, California, with plenty of help from planetary scientist Philip Metzger of the University of Central Florida.

“The project has been a collaborative effort between NASA, academia and industry; and it has been a tremendous success,” said Kris Zacny, Vice President and Director of Exploration Technology at Honeybee Robotics, in a press release. “The WINE-like spacecrafts have the potential to change how we explore the universe.”

Previously, other teams have tested the specific subsystems needed for a steam-propelled spacecraft to perform In-Situ Resource Utilization (ISRU), which is the practice of producing necessary resources from only locally available materials. However, according to Zacny, WINE is the first prototype to successfully show it can combine all the technology necessary for ISRU and steam propulsion: It heated the analog asteroid regolith, extracted water, and then used that water to create enough steam to propel itself right off the ground.

Asteroid Hopper
Though a WINE spacecraft can be set up in many different ways to achieve varying goals, a basic version, Metzger said, would have about 75 meters per second (250 ft/s) of delta-v, which is the total change in velocity the spacecraft would experience as it propels itself off the surface of an object.

This amount of propulsion “is enough to hop a distance of several kilometers at a time on a large world like Europa,” Metzger wrote in an email, “and it would be able to completely escape a world about the size of [Uranus’] moon Puck, which is 160 km [100 miles] in diameter and has an escape velocity of about 69 m/s [226 ft/s].”

According to Metzger, because “the vast majority of asteroids are far smaller than this,” a WINE would have the potential to indefinitely travel between countless asteroids in our solar system — that is, as long as the targets have both water and relatively low gravity. Then, after exploring an asteroid, the WINE would simply refuel and hop along to its next target. Finally, wash, rinse, and repeat.

Although the promise of a spacecraft unrestricted by fuel is a tantalizing notion, there are some limits to what such a craft would be capable of. “For asteroids, WINEs could explore one and then leave it and go explore another,” Metzger said, “but for larger bodies like Ceres or Europa, there is not enough ‘delta-v’ in the propulsion system to be able to escape.”

Fortunately, part of WINE’s beauty is that, even if the craft can’t fully escape some of the solar system’s more massive objects, it can explore them incredibly efficiently by quickly jumping across their surfaces (unlike a rover, which slowly chugs along).

For instance, “on the larger worlds like Ceres or Europa,” Metzger said, “WINE would need to ride to the surface as a hitchhiker on a lander that has more delta-v to do the soft landing.” After landing on the surface, the WINE would simply load up on steam and hop away from the lander to explore the rest of the world. It could then collect samples and return them to the lander for a detailed analysis by more sophisticated instrumentation.

Alternatively, a WINE could carry its own instruments for on-the-fly analyses of larger worlds. According to Metzger, the primary payload likely would be used to analyze a target’s ice content, determining things like how much water is available and how much metal and organic content is within that water. Other instruments, he says, could study the “lumpiness” of the world’s gravity field, and even look for signs of life within the mined material.

No target too far
In order to generate enough power for the initial tasks of mining and making steam, the WINE spacecraft would utilize deployable solar panels. However, if the craft were to venture too far from the sun (for instance, to Pluto), it would need to rely on Radioisotope Heater Units (RHUs) to kick off its mining operation.

“The reason for using RHUs at that distance is because solar arrays will need to be pretty large to provide needed heat for steam (or even for keeping [the] spacecraft warm),” Zacny said in an email. “All spacecraft operations will need to be defined ahead of time and appropriate mass of water calculated beforehand.”

Though a WINE spacecraft would likely need supplemental sources of power to run its mining operation on a distant world, the benefits of a semi-perpetual spacecraft would far outweigh the extra engineering challenges it requires. For instance, by not needing to carry a full mission’s worth of fuel all the way from Earth, WINE-like spacecraft could help drive down the cost of distant planetary exploration.

Currently, with a few notable exceptions, space missions have a rather rigid and limited set of goals. This means that with every new mission, “we lose our tremendous investment in time and money that we spent building and sending the spacecraft to its target,” Metzger said.

However, he said, “WINE was designed to never run out of propellant so exploration will be less expensive. It also allows us to explore in a shorter amount of time, since we don’t have to wait for years as a new spacecraft travels from Earth each time.”

Though the future looks bright for WINEs, for now, the researchers are on the hunt for partners that will continue to help them further develop the prototype so they can one day send a spacecraft (or a fleet of them) hopping throughout our solar system.

And when that becomes a reality, oh, just imagine the places they’ll go.