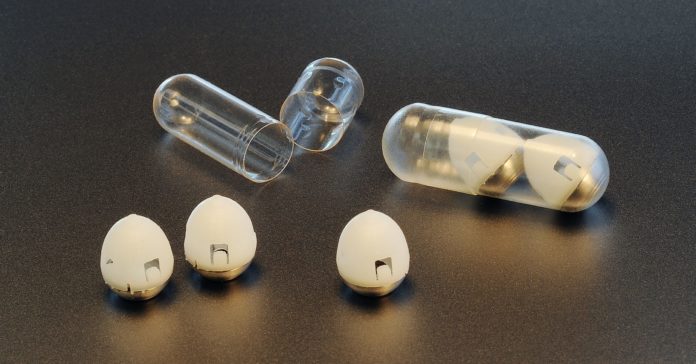 Given the choice between tossing back a dose of medicine and pushing it through your flesh inside a cold, steel needle, most people pick the pill. Convenience, portability, and lack of skin-stabbiness have made pills the most popular way to administer drugs for the better part of medical history. But not all drugs can survive the corrosive, churning trip from the stomach into the intestines and across to the bloodstream. Antibodies, proteins—these molecules are too fragile. That’s why you still have to get your immunizations as shots, and why many diabetics have to inject themselves twice a day with insulin to keep their blood sugar levels from getting toxic.

But there might be another way, if you ditch all your assumptions about what makes a pill a pill and a shot a shot and apply some crazy engineering to the question. Start with an insulin dose, freeze-dry it and compress it into the shape of a needle—you need that shape to get the drug into the bloodstream. Spring-load it into a blueberry-sized pill, so it can be swallowed. Spend some time contemplating charismatic reptiles, and make some design tweaks. Voila, you have a swallowable version of an insulin injection. That was roughly the process of a team of researchers led by Massachusetts Institute of Technology, who published their innovation in drug delivery today in the journal Science.

It’s not just another wild science experiment from the same lab that created this medieval, microneedle-studded masterpiece a few years ago. The work is part of a collaboration with Danish drugmaker Novo Nordisk, the world’s biggest supplier of insulin. They expect to be testing the capsule in humans within the next two to three years.

“The preliminary plans look very promising,” says Lars Fogh Iversen, Novo Nordisk’s senior vice president of global research technologies. “However, it’s early days and more work has to be conducted. We have not yet decided which molecule will be the right one for the first clinical trials.” According to Fogh Iversen, the company is considering other areas besides diabetes, including obesity, haemophilia, and growth hormones.

The pharmaceutical firm first approached the MIT team in the fall of 2014, following the publication of their first attempt at a needle-in-a-pill-pack. Intrigued by the possibility of offering a much easier, pain-free way to dispense its chief product, Novo Nordisk began backing the project in mid-2015, providing grant funding, materials, and scientists. From the beginning, that meant that the engineering couldn’t just be about what worked in a lab. Only concepts that could scale up to commercial manufacturing were considered.

The first problem the researchers had to solve was one of orientation. The group’s previous version had microneedles arrayed in 360-degree fashion to inject their insulin dose into the close-quartered walls of the small intestine. In studies with pigs it injected just fine, but it was hard to predict when and where in the gut that would happen. To achieve a faster-acting, more reliable dose, the researchers decided to rejigger their design to work exclusively in the stomach. But in that more cavernous organ, the shape and layout of their needles would have to change. They needed to make sure 100 percent of the needles made contact with the lining of the stomach. That also implied the pill couldn’t just tumble in free-fall. “We thought at first we might borrow from the Weeble Wobble,” says Giovanni Traverso, a gastroenterologist at Brigham and Women’s Hospital and Harvard Medical School and senior author on the paper. But the round-bottomed children’s toys were designed to be pushed over, they realized, “and we wanted something that once it righted itself would stay that way.”

Which brings us to the leopard tortoise. The steeple-shelled reptile spends most of its days grazing on the savannas of eastern and southern Africa. But to certain circles of applied mathematicians, they’re best-known for the unique geometry of their dome-like carapaces. Those shells make them the best self-righters in the reptile kingdom; they’re basically a walking gömböc. Alex Abramson, an MIT graduate student on the project, used modeling software to create shell-shaped capsules made out of heavy steel on the bottom and lighter, biocompatible plastic on top. The result was a roly-poly-pill that autonomously rights itself to be needle-down.

Note the singular use of “needle.” The new design was smaller, so it had room for fewer self-plunging syringes. But at some point, the researchers realized they only needed one, if they made it out of insulin. Using a compression method similar to how over-the-counter pills like Ibuprofen are made, they pressure-packed insulin into sharp stake-shaped molds. The end product look like a javelin in microscopic miniature, though the paper’s authors prefer the term “milliposts.”

The last challenge was figuring out how to propel that pure insulin millipost out of the capsule with enough force to pierce the stomach lining and deliver the dose. And when the eureka moment came, boy was it sweet. “We were looking for something common to every stomach and came up with humidity,” says Abramson. “It dawned on us that some types of sugars fracture in a precise way that releases a lot of kinetic energy when it gets wet.” Yep, they spun a sugar barrier around a loaded steel spring and housed it at the top of the pill, into which they cut tiny vents to allow a few drops of gastric juice to enter, thereby dissolving the sugar and freeing the spring to plunge the insulin to its final destination. Pretty cool.

Even cooler, it appeared to work quite well in tests with pigs. The researchers report successfully lowering the porcine subjects’ blood glucose levels and without any adverse effects like internal tears or gastric blockages on the pill’s way out. Traverso says the next project is to test the capsules in larger animals, to understand what happens if they inject repeat doses day after day, as a Type 2 diabetic would require for it to be useful. They’re also planning to add additional sensors to track where the pills are and whether or not they dropped their dose. Both will be essential to convincing regulators the capsules are safe and effective enough to replace insulin injections.

Drugs like insulin, including not just hormones but ones made of out strings of DNA and antibodies, are growing more common, so researchers and pharma companies alike are searching for alternatives to injecting them. “This delivery method developed by Traverso’s team could be applicable to many drugs that would otherwise require hypodermic injection,” says Mark Prausnitz, director of Georgia Tech’s Center for Drug Design, Development, and Delivery, who was not involved in the study. But he cautions that one design might not work across all drugs and patients.

Resolving these questions could make it significantly easier to treat today’s big killers with known medicines. It could also be important for solving some of the challenges facing future Crispr-based treatments and many new kinds of vaccines, such as one for Ebola. Maybe this is one race that will also go to the tortoise.

GizmoCrazed - November 13, 2015 0
There is no doubt that social media is an avid tool to widen your social circle. However, it is not without its downsides. People...

New iPad To Hit Stores In U.S. And 9 Other Countries...