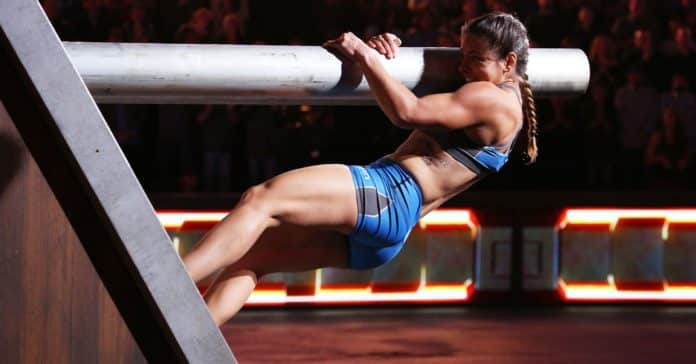 I’m oddly attracted to The Titan Games. I think we can all agree that this is the newest incarnation of the popular ’90s show American Gladiators. It’s not the theatrics that I enjoy, it’s the crazy competitions. As you can imagine, there’s a bunch of cool physics to talk about for some of these events. Actually, if you use a little bit of physics you might be able to get an advantage over your opponent.

In this case, the event is the Herculean Pull. The main idea is to pull some horizontal poles out of a giant wedge. The two contestants are trying to pull the poles out from different sides. There’s a chance you could reach a pole before the other person and win the easy way. But if you’re both pulling on the same pole, you need to use some physics. Here, check out this clip from the show:

The physics trick is to not just pull out on the pole—but also UP! Yes, pull out and up. This is especially true if you are on the losing end, as you can see in the example above. She makes the mistake of pulling out and down (because that seems more natural), but it leads to her loss.

Why do you want to pull UP? Let me draw a simple force diagram showing the pole along with the forces acting on this pole.

There’s a lot going on in that diagram, so let me break it down for you. (That’s what I do.) The most obvious forces are the two pulls from the contestants. I have labeled these “A” and “B” to be as generic as possible. In this diagram, both of them are pulling down a little bit. The next set of forces are the “normal forces”—labeled with the “N” for normal. These forces are a result of the pole pushing against the edges of the wedge hole. Since the pole doesn’t go into the wedge material, we know the wedge pushes back on the pole. This is essentially the same force that pushes up on a book sitting on a table. Without this force, the book would just move right through the table—and that would be super weird.

In this expression the μk is just a coefficient that changes for different interacting materials. Let’s say we have wood rubbing against plastic. The coefficient of friction could be around 0.2 (that’s just an estimate). But it’s not just the coefficient. The frictional force also depends on the normal force. The harder those two surfaces are pushed together, the greater the frictional force.

But where is the physics trick to win this competition? I’m getting there. We need one more physics idea to understand the trick: torque. The idea of torque can get quite complicated, but in some cases it’s not too bad. Take the example of a door. If you want to open the door, you need to exert a torque on it. So, where should you push on the door? On the side with the hinge or on the side opposite the hinge? Yes, you know the answer. If you push on the side with the hinge, the door will not open no matter how hard you push. This is because torque is a product of force and distance from the rotation point.

Maybe this diagram will help.

The two forces push with the same magnitude, but the one farther from the hinge has a greater distance and thus a greater torque. There. That is your quick introduction to torque. Now back to that giant pole. Let’s assume for a moment that the pole is at rest and in equilibrium (not moving, not rotating). In this case, two conditions must be true. The total vector force must be equal to zero newtons (otherwise it would accelerate), and the total torque must be zero (otherwise it would have an angular acceleration). And there have to be both positive and negative torques in order for them to add up to zero. Let’s say that a torque that would make something rotate in the clockwise direction is negative. That will work.

Since the force is really in two dimensions, I get the following three equations for equilibrium.

Finally—we are ready to answer the question. Let’s look at the forces on the pole again. In the x direction, there are four forces. There are the two forces from the humans (or at least a component of the force), and then there are the two frictional forces. Let’s say these all add up to zero. In that case, one person would have to pull much harder than the other person to overcome both the other pull AND the frictional force.

If you can increase the frictional force, you can make it harder for the other person to pull out the pole. This is where the torque on the pole matters. Imagine that both humans are pulling down as you can see in the diagram above. Also, let’s add up the torques as calculated from the right end of the pole (you can pick any point though). The right-pulling person pulls down on the pole and this produces a negative (clockwise) torque. The other two forces that contribute to the total torque are the two normal forces. The normal force on the left pushes up and creates a positive torque, and the normal force on the right pushes down with a negative torque. Oh, the left-pulling person produces no torque since the torque distance for that person is zero.

What if there was a way to increase the normal force on the right (labeled N1) in the diagram? With a greater normal force you would also get a greater frictional force. This would make it harder for the left-sided person to pull out the pole. Here, maybe this updated force diagram will help.

By pulling UP on the right side, the normal force on that side also has to increase in order to get the total torque to zero. This increase in normal force increases the friction. That’s extra help in preventing the pole from sliding to the right. It might seem natural to pull down, but pulling down just makes it easier to lose. If you have Herculean strength it probably doesn’t matter—but for normal people, it can make the difference between winning and losing.