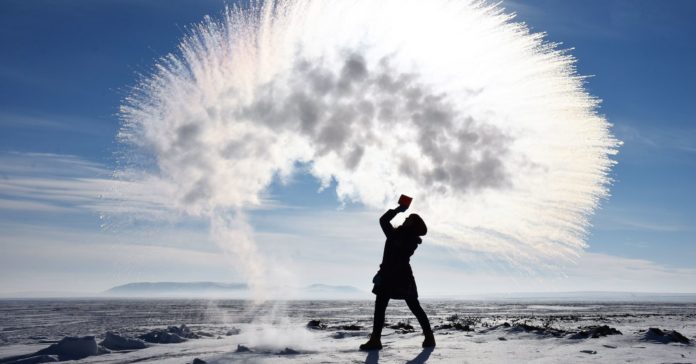 I guess it’s a mixture of boredom from staying home in the super-cold weather and access to the internet that causes this problem. What problem, you ask? The countless videos of people throwing boiling water out into the Arctic cold air during the polar vortex. OK, I’ll admit—it also looks really cool. Here’s what it looks like.

But what the heck is really happening here? Why does it make this awesome cloud-looking thing? Why does it have to be super cold?

Yes, that boiling water is essentially turning into snow. Snow is pretty. But why? Actually, this is a great example of water in all three phases: solid, liquid, and gas. The boiling water starts off mostly in the liquid phase. However, since it’s so hot, the water has enough energy to make the transition from liquid to gas. Hot water evaporates faster than cool water, which is why this trick works better with boiling water.

When the boiling water is thrown into the air, a couple of things happen. First, the hot water is making water vapor through evaporation. Second, the water breaks into smaller globs of water as it passes through the air. Both the evaporation and the smaller blobs mean that the water will cool off quickly. On top of that, cold air can’t hold much water vapor—that’s why the air is so much drier in the winter. So the water vapor doesn’t stay in the air, it condenses out.

In the end, you get this super-cold water that just plain freezes. It’s essentially the same as snow. Boom. Instant snow. It doesn’t work with just plain cold air because the air doesn’t condense out as easily.

But what about another, related question: Is it true that boiling water freezes faster than room-temperature water? Does this have anything to do with the boiling-water-to-snow stunt? Not really. This effect is often referred to as the Mpemba effect and it has been observed for quite some time—even Aristotle considered this phenomena.

However, it is really hard to get nice data for hot water going all the way to frozen water (also known as ice). So many small factors can have a significant impact on the cooling process. You have to consider evaporation and convection currents. There can be different thermal interactions with the environment for a hot or cold container of water. On top of that, the change in energy needed to go from a liquid to a solid is very large compared to the energy change for cooling off a liquid.

In the end, it’s really difficult to create a theoretical model that has boiling water freezing faster than room water. Here is a great video that goes over these points.

So, even if the Mpemba effect is real, you don’t need it to explain how you make snow with boiling water in super-cold air.