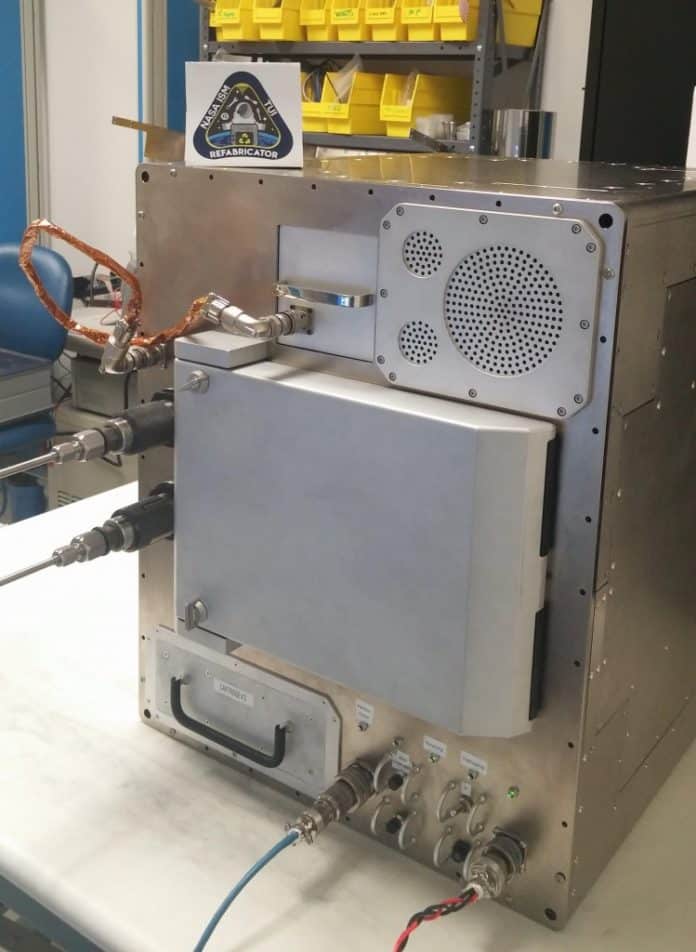 The Refabricator can recycle plastic and 3-D print it, all within a box the size of a mini fridge. (Credit: Allison Porter, Tethers Unlimited, Inc.)

Last week, Northrop Grumman’s Cygnus spacecraft departed the International Space Station, having delivered a batch of new experiments and cargo. Among them was the Refabricator, a new machine that will not only make objects on demand things for the astronauts, it will recycle them too.

While 3-D printers are becoming commonplace, nowhere are their benefits more obvious than in the confines of space. Cargo resupply missions to the ISS are routine, but as human spaceflight pushes farther out into deep space, there will be more pressure for self-sufficiency, as resupply missions become more difficult and expensive. That means not only manufacturing supplies, but also conserving and reusing the supplies on hand.

The Refabricator is in part a 3-D printer, allowing astronauts to make tools to their own specifications immediately, without waiting months for items to be flown from Earth. But there’s been a 3-D printer on the ISS since 2014. The Refabricator stands out because it’s able to recycle things it’s already printed and turn them into new materials.

A ratchet wrench 3-D printed aboard the ISS. (Credit: Made in Space)

It can even create the raw 3-D printer filament from old packing supplies, like the foam and plastic shipping materials NASA uses to pack its cargo for the trip to space. Most 3-D printers cannot reuse plastics once printed, because the way they print weakens the plastic’s integrity. But the Refabricator uses a different printing method, so that it can reprint the same material many times.

NASA hopes the new printer/recycler will both free up space on future resupply launches and reduce overall waste on the ISS. It could even lead to 3-D printers on Earth that one day use the items we normally put on the curb, like water bottles or plastic bags, to create brand new custom materials for our homes.

Tethers Unlimited, Inc. developed the Refabricator for NASA’s In-Space Manufacturing Office. Their whole creation fits into a cube about the size of a minifridge. The company can monitor the Refabricator from Earth, but astronauts on the ISS will perform the operations.

For this first test flight, that will mean having the Refabricator print, recycle, and re-print creations up to seven times in a loop, to prove that the material doesn’t weaken with repeated recycling. Those final printings will then be delivered back to Earth for testing – in particular, to see if and how the printing process differs in space from on the ground.

Check out the Refabricator in action with the NASA video below: