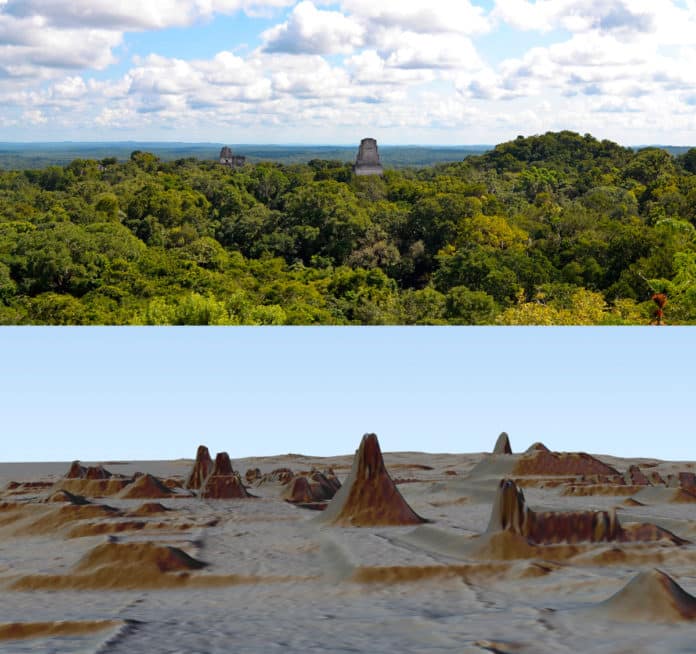 Thomas Garrison pauses in the middle of the jungle.

“That’s the causeway right there,” he says, pointing into a random patch of greenery in the Guatemalan lowlands.

I squint, trying to make out features in the tangled rainforest undergrowth. There’s a small lump, rising no more than a foot or two from the forest floor.

The Ithaca College archaeologist has spotted the buried remnants of a Maya road, a ribbon of limestone that once cut through the wrinkled landscape. We’re a full day’s walk from civilization, standing in the remains of a once-populous kingdom. The road before us is just one piece of a vast network leading to terraced fields, reservoirs, defensive fortifications and more, all sprawling invisibly throughout the forest.

In the 1,000-plus years since the Maya society collapsed, the jungle has returned with a vengeance. A tide of flora has swallowed up roads and temples, turning stone structures into lumps and mounds indistinguishable from the natural topography.

Garrison, an expert at picking out buried structures, had walked right by this road for years, never knowing it was there. But now, a revolutionary technology called lidar is giving archaeologists a God’s-eye view of the rainforest — and what’s buried beneath.

Lidar, which stands for light detection and ranging, bathes the jungle canopy in a stream of laser beams delivered from planes flying above. As the light bounces back, it creates a precise map of surface contours beneath the forest canopy.

Back in camp, Garrison pulls up the data on his laptop. Maya ruins leap from the featureless jungle, giving new meaning to the landscape that surrounds us. The researchers’ base shows up as a small huddle of buildings; surrounding it, hundreds of Maya structures stipple the ground in every direction. Some Garrison knew about — the majority, however, are brand new. To him, at least.

Back in 2016, Garrison and a group of archaeologists organized a sweeping lidar survey of the heart of Maya civilization, once centered here in the Guatemalan lowlands. Their scans covered 800 square miles across the Petén region, which covers much of Guatemala’s northern half. It’s just a fraction of the former Maya territory, yet lidar revealed some 60,000 previously unknown structures.

Now, researchers can comprehend the full scale of this ancient civilization, from vastly expanded trade and agriculture to surprising military sophistication. After decades of digging, new and exciting dimensions of Maya society are finally coming to light.

Over a thousand years ago, the Maya dominated this environment. They emerged around 1000 B.C. and, over the next millennia, rose to become the pre-eminent Mesoamerican civilization.

Millions of people lived in the forest, members of a loose alliance of interconnected city-states. The Maya developed a system of writing, as well as a calendar system and sophisticated astronomical charts. In a world without metal, they built towering temples in cities like Tikal and Chichén Itzá, as well as roads, reservoirs, irrigation networks and terraced fields. Their civilization spanned thousands of square miles of jungle across Central America.