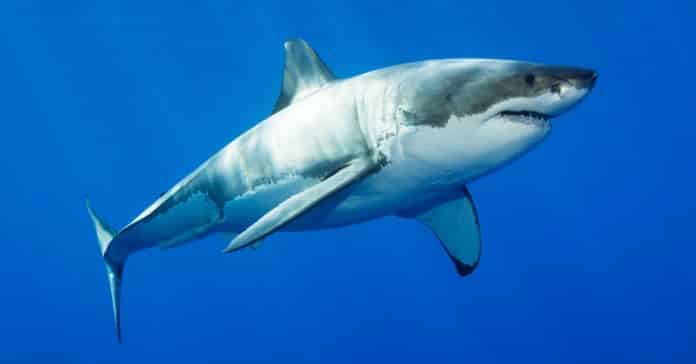 Is there any more daunting animal to study than the great white shark? Just you try attaching a radio transmitter or drawing a tube of blood from a two-ton, razor-toothed, meat-seeking missile. But scientific understanding of these iconic apex predators has been limited by technical challenges as much as human bias for studying species that reside on closer branches of the taxonomic tree. Sharks evolved from the rest of the animal kingdom 400 million years ago—before the first adventurous amphibians left the oceans for dry land. What could the great white possibly teach 21st century humans?

A lot actually, according to the scientists who have spent years painfully decoding its DNA. Today, they reported their efforts mapping the first great white shark genome in the latest issue of the Proceedings of the National Academy of Sciences.

The major scientific milestone is a boon for conservation biologists seeking to better understand population dynamics of the great white and other shark species, nearly all of which are in steep decline. And the massive genome—great whites, it turns out, have 41 pairs of chromosomes compared to our 23—also holds clues to how these ancient animals have for so long ruled Earth’s oceans. These clues could one day help our own evolutionarily infantile species live longer, less disease-ridden lives. (Provided of course we don’t burn the planet down first.)

“Getting money for shark genomics is really difficult,” says Michael Stanhope, an evolutionary biologist at Cornell University, who co-led the genome-mapping project with his friend Mahmood Shivji, a conservation biologist at Nova Southeastern University’s Guy Harvey Research Institute. Despite the falling cost of DNA sequencing, it was still a massive undertaking, costing hundreds of thousands of dollars, most of which was funded by the Save Our Seas Shark Research Center. “Historically, there’s been a lot more interest in sequencing other vertebrates, like livestock and primates,” says Stanhope. “But sharks have some fascinating biology going on that really warranted more investigation.”

For one thing, sharks are super-healers. Fishermen and marine biologists have for decades swapped tales of bitten, gashed sharks turning up completely healed from those serious external injuries just a few months later. A recent study of blacktip reef sharks found them remarkably resilient to physical traumas—recovering from wounds in a matter of weeks, sometimes days.

The new genome map reveals how the great white achieves this legendary red potion-style health boost. Millions of years of competing in the dangerous waters of the world’s oceans fine-tuned a set of genes involved in several key processes of wound healing. These include DNA sequences that code for supercharged blood-clotting agents and scaffolding proteins responsible for laying down the foundational units of new flesh. Besides possessing uniquely adapted versions of these genes, great white sharks also appear to have more of them than any other vertebrate. “They’ve devoted a significant proportion of their genome to wound healing,” says Stanhope, which suggests the species’ reign at the top of the food chain is only a fairly recent development, in evolutionary time.

With no natural predators, great white sharks routinely live up to 75 years. Given their massive size and long life spans—both recipes for racking up loads of mutations—they should be mathematically more likely to develop cancer. But, more and more, researchers are realizing that long-lived, large-bodied species, including elephants and whales, do not get cancer more than humans. (Biologists call this Peto’s Paradox.) Sequencing studies suggest these superior cancer-fighting abilities come from clusters of genes that serve to protect the integrity of the genetic code itself, a trait known collectively as genome stability.

Stanhope and Shivji’s new map reveals that great white sharks also possess huge chunks of code for these genome-stabilizing DNA repair mechanisms and for tumor suppression. Because sharks evolved so long ago, and so far away from humans on the tree of life, it’s possible that these genes represent totally novel anti-cancer defenses. The incidence of cancer in wild sharks is poorly understood, so the scientists plan to test the hypothesis in the lab. By splicing genome-stabilizing shark genes into transgenic mice and then exposing the rodents to well-known carcinogens, they hope to measure the protective powers of shark DNA.

“Understanding how these genes might be inoculating these animals from cancer could be a huge benefit to humans,” says Stanhope. But he stresses that it will take years of work to translate these discoveries into potential cancer drugs or new methods for healing human wounds. Consuming shark products will not confer any of their superpowers. “You’re no more likely to get protected from cancer by eating shark than you are likely to develop the ability to swim faster,” says Stanhope.

But people peddling this false belief prop up an illegal fishing industry that butchers an estimated 100 million sharks every year, hacking off their fins and throwing them back into the sea to thrash desperately to their deaths beneath the waves. Stanhope and Shivji hope their work helps to illuminate how remarkable these creatures are, to inspire people to conserve rather than consume them. Of the more than 500 species of sharks that swim the Earth’s waters, the great white is only the second one to have its genome sequenced. Who knows how many more mysteries lurk below the surface, in strings of DNA just waiting to be decoded.

02/18/19 8:30pm EST This story has been updated to correct the average weight of an adult great white shark.