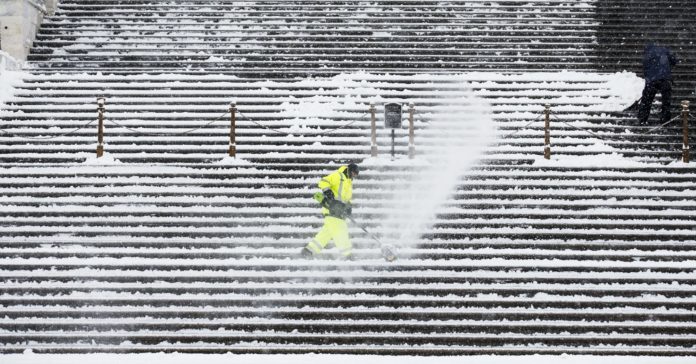 The government’s new weather forecast model has a slight problem: It predicts that outside temperatures will be a few degrees colder than what nature delivers. This “cold bias” means that local meteorologists are abandoning the National Weather Service in favor of forecasts produced by British and European weather agencies.

For the past few weeks, the National Weather Service has been forecasting snowfall that ends up disappearing, according to Doug Kammerer, chief meteorologist at WRC-TV in Washington, DC. “It’s just not performing well,” Kammerer says. “It has continued to show us getting big-time snowstorms in this area, where the European model will not show it.”

The new model, known as GFS-FV3 (Finite Volume on a Cubed Sphere dynamical core), has often overpredicted snow in the Northeast Corridor between Washington and Boston, a region where incorrect forecasts affect the lives of tens of millions of people.

The existing NWS forecast model, called the Global Forecast System, or GFS, has long been considered second in accuracy to the European models. Now Kammerer and others say the new FV3 upgrade is worse than the forecast model put out by our neighbors to the north. “The running joke now among meteorologists is that [the FV3] is looking more like the Canadian model,” Kammerer says. For those not plugged into weather humor, apparently the Canadian model also predicts big snowstorms that ultimately vanish.

The FV3 was developed over the past three years by NOAA’s Geophysical Fluid Dynamics Laboratory in Princeton, New Jersey. FV3 forecasts were released a few weeks ago for testing by local meteorologists, and many of them took to Twitter to complain about the results. “I have no faith in the FV3 [for snowfall]”, tweeted Boston-based Judah Cohen, a meteorologist at Atmospheric Environmental Research, a private firm that provides forecasts to commercial and government clients.

On Wednesday, the National Weather Service tweeted that the FV3 will be fully operational on March 20. But a NWS official told WIRED on Friday that the agency might push it back a few weeks because of all the complaints.

The FV3 upgrade uses an enhanced set of algorithms that have been developed in the past few years by climate scientists to describe the interaction between the atmosphere and the oceans. These algorithms, which capture the physics of cloud formation, tropical storms, and polar winds, among other things, are then populated with temperature data from satellites and surface observations to generate a three- or 10-day forecast.

“No model is perfect,” says David Novak, acting director of the NWS’ National Center for Environmental Prediction. “The weather community knows this.” Novak acknowledges that the FV3 has a “cold bias” and that the agency is working to fix it. “It tends to be colder than what is observed. It appears to be a systematic issue, we are doing our due diligence and investigating these reports.”

Novak says the 35-day government shutdown slowed final testing of the FV3. When federal climate scientists and programmers got back to work on January 25, the agency expected the model to be almost ready to go live. It looks like that deadline will now be pushed back.

He argues, however, that the FV3 isn’t all bad. He says it produces more accurate forecasts of hurricane intensity and the jet stream, the current of high-altitude air around the northern hemisphere that drives much of the United States’ weather patterns. “We found a lot of the good things,” Novak says. “We do know there are some areas that may need additional improvement.”

NOAA recently signed an agreement with the National Center for Atmospheric Research, a Boulder-based research facility that also develops forecast models. Antonio Busalacchi, director of NCAR’s parent agency, says he’s optimistic that the new NWS model will get better over time. “It’s premature to evaluate any one modeling system based on a snapshot with snowfall forecasts,” Busalacchi says. “One needs to look at the totality of the system.”

At the same time, Busalacchi says that NWS and its parent agency, NOAA, might want to rely on help from academic scientists who are developing their own forecast models. “We want to get in a position where the research community and operational community are more collaborative than we have been in the past,” he says.

As for Kammerer, he says he’ll keep watching the new NWS model as he prepares his own forecast for the weather in Washington, DC. But maybe not for the next snow day.

GizmoCrazed - September 28, 2018 0
There was a time many years ago when cars guzzled gas like beer, teenagers raced them on Friday nights, and Detroit automakers boasted about...