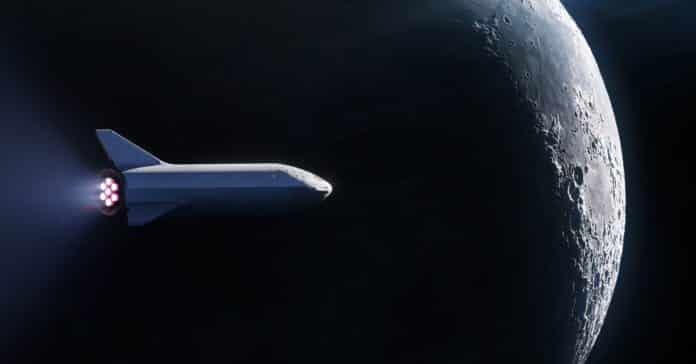 Last Sunday, as much of the country tuned into the Super Bowl, SpaceX CEO Elon Musk and a crew of engineers were gathered in McGregor, Texas, the small city where the company maintains a rocket test site. For a few seconds in the early evening, the sound of a new engine roared across the flatlands. “First firing of Starship Raptor flight engine!” Musk tweeted along with video footage of the test fire.

The engine will power SpaceX’s upcoming heavy-lift launch system, consisting of two components: a large rocket dubbed the Super Heavy and a crew transporter called Starship. First introduced by Musk in 2016 at a meeting of the International Astronautical Congress in Guadalajara, Mexico, the Starship transporter is designed to carry as many as 100 people to the moon and Mars. In true SpaceX fashion, both the rocket and the transporter will be reusable: able to launch, land, and repeat many times over.

SpaceX tends to be private about its affairs, but not much gets past the company’s biggest enthusiasts. In January, eagle-eyed observers near the company’s Texas facilities spotted the appearance of a silver spaceship on the otherwise flat landscape, which Elon Musk confirmed to be SpaceX’s Starship. Unlike the iconic black-and-white paint scheme of the Falcon series of rockets, the Starship transporter sports a shiny, stainless steel skin that evokes a vintage sci-fi vibe. Musk says the vehicle is a prototype version of the craft that will one day ferry humans.

This prototype is now preparing to take part in a series of short flights called “hop” tests. According to FCC filings, it will conduct both low- and high-altitude flights that could climb as high as 16,400 feet. The transporter that will conduct those flights will be powered by three engines identical to the one test-fired on Sunday. In December, Musk hinted that hop tests would begin in early spring. But in January, gusts of up to 50 miles per hour knocked over the prototype, breaking the mooring blocks that secure the Starship to the ground, Musk reported on Twitter. The needed repairs might push out the timing of the tests.

The Starship system is the latest in SpaceX’s parade of increasingly large rockets. A year ago, SpaceX launched and landed its Falcon Heavy rocket for the first time, generating 5 million pounds of thrust from the rocket’s 27 engines. Tens of thousands of spectators watched as two of its three boosters landed in perfect unison on their designated landing zone. (The rocket’s center core failed to land on one of the company’s two drone ships.)

That was the only flight of the Falcon Heavy so far, though SpaceX says the next launch is estimated to take off no earlier than March. As the most powerful launch vehicle on the market today, Falcon Heavy can deliver to low Earth orbit more than twice the payload capacity of its counterpart, the Falcon 9. But even it can’t help Musk ferry people to the moon or Mars, an ambition that he has echoed repeatedly since SpaceX’s inception. For that, Musk needs the Starship.

Sunday’s test was not the first time a Raptor fired up, but it does represent the first test of a “flight-ready” engine. Afterwards, SpaceX posted on Instagram that the engine had reached about 60 percent of its power—a milestone for the Starship program. Unlike the engines currently powering SpaceX’s Falcon 9 and Falcon Heavy, which use a mixture of kerosene and liquid oxygen, the Raptor is fueled by methane. (SpaceX’s competitor, Blue Origin, is also developing a methane-fueled engine called the BE-4.) Mars has a generous supply of methane, which could make refueling any rockets that land there relatively straightforward.

After its hop tests, Musk has said he will divulge more of the vehicle’s design details. Some of its specifications have changed from what he’d previously released. When the concept of an interplanetary transport system was first revealed, for example, he had said that the giant rocket would be constructed out of carbon-fiber composites. The debut of a metallic prototype shows that SpaceX pursued a different tack. Musk says the stainless-steel alloy that makes up the Starship can withstand the searing temperatures experienced during the different phases of spaceflight. Resembling the Atlas rockets of the early space program, the Starship’s metallic skin won’t need as much thermal shielding as other materials. And areas that take the brunt of the heat during atmospheric entry will be actively cooled with residual liquid methane. The vehicle will also feature landing legs and windows so that passengers onboard can see out during flight.

Musk and SpaceX have a lot riding on this engine, as it will power both the Super Heavy rocket during launch and the Starship spacecraft in space. Last September, SpaceX announced that it had signed its first passenger to fly on the Starship transporter. Yusaku Maezawa and a gaggle of artists will embark on a weeklong journey to the moon. The mission is planned for 2023, but developing rockets costs money, and the feasibility of SpaceX’s Starship has been in question since its inception. So far, Maezawa’s trip is the only mission booked for this vessel, but as SpaceX moves through the design process and Musk reveals the rocket’s capabilities, more missions could come.

Even Musk knows that the notion of Starship is outlandish, referring to its development as “absolutely insane.” According to the CEO, the work on this project and the company’s space-based internet endeavor, dubbed Starlink, are what recently prompted SpaceX to restructure its workforce, laying off 10 percent of its staff. In explaining the SpaceX layoffs during last month’s Tesla earnings call (where Musk is also CEO), he described it as a preemptive measure, since such massive projects have bankrupted other organizations.

To keep the project from spiraling out of hand, Musk says that SpaceX plans to build its Starship as quickly as possible. But first, SpaceX has to prove it can safely transport people—starting with a different, existing rocket, and an upcoming trip to the International Space Station.