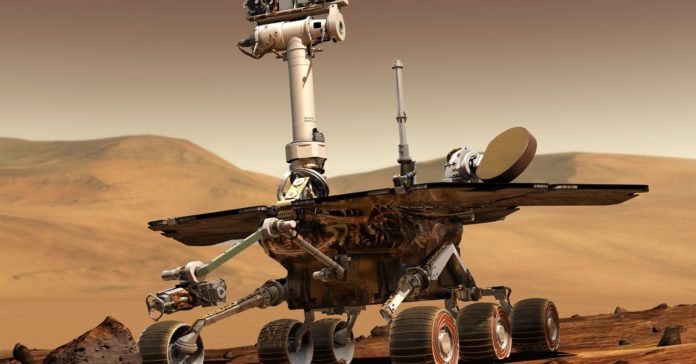 Last night, NASA reached out one final time to the Opportunity rover on Mars, hoping the golf-cart-sized machine would phone home with good news. Since June, the robot has been unresponsive, likely because a planet-wide sandstorm coated its solar panels in dust. NASA has pinged it over 1,000 times in those gloomy eight months, to no avail. Last night’s attempt was no exception: NASA has announced that Opportunity is officially dead.

“I was there yesterday and I was there with the team as these commands went out into the deep sky,” said NASA associate administrator Thomas Zurbuchen in a briefing this morning, titled A Lifetime of Opportunity. “And I learned this morning that we had not heard back and our beloved Opportunity remained silent.”

“I am standing here with a sense of deep appreciation and gratitude that I declare the Opportunity mission as complete,” Zurbuchen added. “I stand here surrounded by the team and I have to tell you, it’s an emotional time.”

So yes, Opportunity is technically dead. But perhaps it’s more accurate to say it’s bravely completed its mission—and then some. It was only expected to scoot about the martian surface for three months, yet here we are 15 years later. It was designed to travel just 1,100 yards, yet ended up roving a stunning 28 miles. With its companion rover Spirit, the two robots studied the hell out of the Red Planet, exploring geology and dust devils and even finding meteorites.

But how on Earth (or Mars) did Opportunity last this long? Two reasons. First, NASA had anticipated that dust would be a problem and expected the stuff to gather on Opportunity’s solar arrays and choke off power in around three months. “What we didn’t expect was that wind would come along periodically and blow the dust off the arrays,” said John Callas, project manager of Opportunity, at the press event. “This, on a seasonal cycle, actually becomes pretty reliable and allowed us to survive not just the first winter but all the winters we experienced on Mars.”

Second, NASA knows a thing or two about engineering robots. “These rovers actually have the finest batteries in the solar system,” Callas said. Opportunity’s lasted 5,000 charge-discharge cycles and remained at 85 percent capacity up until the robot’s demise. “We’d all love it if our cell phone batteries lasted this long.”

Callas also offered insights into why Opportunity couldn’t recover from June’s historic global dust storm. The lack of light meant its battery couldn’t charge. But in an ironic turn of events, it may have been a clever emergency workaround in the rover’s early days that ended up sealing its fate 15 years later.

A visualization of just how bad the historic dust storm was. At left is normal Mars weather, at middle are other dust storms Opportunity had weathered, and at right is the almost total darkness of the storm that felled the rover.
NASA

After Opportunity landed, in 2004, engineers realized that a heater in its robotic arm was stuck in the on position. The solution was to shut everything down each night, which allowed the rover to stay just warm enough to survive until the sun came up in the morning.

“It’s kind of like if the light in your bedroom is stuck on, and you can’t sleep, so what you do is you go outside and turn off the master breaker for your house,” Callas said. “But that means your refrigerator starts to warm up. But by the morning time when you wake up and turn the breaker back on, the ice cream hasn’t melted too badly. Imagine doing that for 5,000 nights.”

The fix, though, may have conspired with the dust storm to put Opportunity to sleep for good. “Because with a loss of power, the clock on the rover gets scrambled, and it wouldn’t know when to deep sleep, so it probably wasn’t sleeping at night when it needed to,” Callas said. “And that heater was stuck on, draining away whatever energy the solar arrays were accumulating from the sun to charge those batteries.”

Opportunity’s long-delayed retirement, though, is nowhere near the end of Mars science. In November, the InSight lander touched down on the planet’s surface. Its mission? Sit in place and deploy a range of instruments that will help reveal the geological secrets of Mars.

Nor is it the end of Mars rovers: Curiosity is still truckin’, exploring the planet’s geology and taking lovely selfies. (It is nuclear-powered, by the way, which makes it more tolerant of the vagaries of Mars’ weather.) And the Mars 2020 rover will soon land on the Red Planet, setting the stage for human exploration. It’ll probe for signs of erstwhile microbial life, test a method for producing oxygen from Mars’ less-than-breathable air, and study surface conditions, so future human explorers don’t run into any surprises.

NASA has learned so much about Mars from Opportunity, but it has also learned about Opportunity from Opportunity. Every success, like a rover tackling different terrain, teaches engineers about planetary robotics, as does every failure, like Spirit’s retirement after getting stuck in soft soil. Opportunity’s and Spirit’s meanderings will inform how the next Mars rovers are designed and how any number of other robots might one day walk and roll and fly alongside humans on Mars.

So thank you, Opportunity, for your service. May you rest peacefully in the dust.