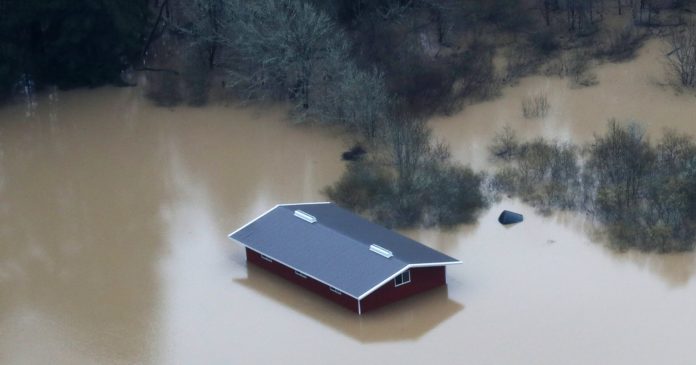 Friends, have you thought about your insurance lately?

Dammit! Wait, no, look: Climate change makes natural catastrophes worse, in both intensity and frequency, and insurance might be a significant way to pay for recovery. International aid can be unreliable; government money really is just taxpayer money. Corporations and nations have, for at least a decade, had access to quick infusions of post-disaster cash; now they might be common for regular people too—and if you’re in a disaster zone, a cash bonanza could be the difference between staying and rebuilding or having to just leave, permanently.

Typical insurance, the kind you probably have on your car or home, helps with this, but it is slooooow. It pays out only after you make a claim and get a valuation of the damages—and then you still have to wait for the check. That’s not much help if you’re wading through floodwater.

Insurers have figured out a way to speed that up—by restructuring the system. Forget about claims and adjustment; with these new kinds of policies, all it takes to get the financial ball rolling is the occurrence of a trigger, a previously agreed-upon event: an earthquake of sufficient size, say, or a hurricane with winds of a given speed. It’s called “parametric insurance,” and if one of those hazard parameters gets met, every policy holder downrange of the trigger gets an automatic payment of a set amount. Pow.

Governments and corporations are into it. The investment world originated the idea, probably because large organizations that incur complex damages appreciate a fast, predictable payout. And catastrophes can make deploying claims adjusters unsafe or outright impossible—the Nepal earthquake of 2015, for example, killed 9,000 people and incurred losses in the range from $6 billion to $10 billion. Only a fraction of that was insured, and even getting help to the region was a challenge. A big, all-at-once infusion of cash would have helped.

Since 2007, countries in the Caribbean and beyond have together operated the Caribbean Catastrophe Risk Insurance Facility to deal with the problems developing countries typically face after hurricanes, earthquakes, and floods. The African Union has one, as does Hong Kong in case of typhoons. “If you have good enough data and good enough sensing technologies, such as the seismometer network in California or the hurricane-hardened WeatherFlow anemometer stations on the East Coast, you can get that data and very quickly work out whether someone should be getting paid,” says Samuel Jay Gibson, of the Capital and Resilience Solutions Group at the catastrophe risk modeling firm RMS. “This allows post-event, initial injections of cash for immediate disaster recovery.”

Until recently, individual consumers didn’t have access to parametric insurance in the US. That’s changing: In October 2018, a company called Jumpstart started offering earthquake coverage to Californians. The trigger is a quake that reaches 30 centimeters per second of peak ground velocity, a measure the US Geological Survey uses to create “shake maps” of intensity.

So if a quake hits and you’re in the “red zone” of 30 cm/sec PGV, you get an automated text message asking if you want your money. Confirm—you have to confirm for regulatory reasons—and you get a direct deposit of $10,000. “Even if there’s no damage to your stuff, your life is going to be messed up in an earthquake that big,” says Kate Stillwell, Jumpstart’s founder and CEO, a structural engineer who spent a decade building computer models of earthquake risk. That money can pay for a hotel after evacuation, for child care if schools close, for a quick car repair, or to make up for lost work days because the roads are too damaged to drive and transit is suspended.

Insurance and risk are primarily about math. The basic principle of just about all insurance is that enough people pay premiums over time to cover the big payouts after an event. In California, everyone knows a big earthquake is coming. But only 10 percent of homeowners have quake insurance; the same goes for commercial buildings. Even if you survive a disaster, even if most of your stuff survives, you still face consequences. And those hit poor people—less likely to have ready cash or stable support networks—the hardest. Watching New Orleans after Hurricane Katrina, Stillwell realized that those social vulnerabilities can be as much a problem as the actual disaster. “As structural engineers, we are not doing our job if the other pieces of the resilience puzzle are not in place, and one of those pieces is getting enough money into the system,” she says. “What good are safe buildings if nobody stays to live in them?”

In business school, Stillwell learned about “catastrophe bonds,” a financial tool pegged to disasters. Parametric insurance fits that category. She also realized that new technologies—more accurate hazard models, automated financial services, and a robust text-messaging system—could actually sustain a parametric consumer business. “Fundamentally the motive was to get more money into the system,” according to Stillwell. That let her incorporate as a public benefit corporation, a so-called B-corp, to do post-disaster stimulus. Originally the company was going to pay $30,000; she says California regulators told her that amount was large enough that people might think Jumpstart was meant to cover all their losses, rather than serve as “gap coverage” in a disaster’s aftermath. So she lowered the payout. (The premiums, ranging from $11 to $33 a month depending on zip code, cover the business and the cost of paying for the collateral—a pool of money at the insurer Lloyds of London that makes sure Jumpstart can always pay out.)

The key to making parametric insurance work is dealing with “basis risk,” the match (or mismatch) between a trigger and the damage it can actually cause. If you model damages for a magnitude 7 quake and set that as a trigger, but then suffer damages at magnitude 4, you’ve blown it. “So how you design that trigger could vary depending on which of the different types of coverage you’re looking for,” Gibson says. “It starts with understanding the problem space and then moving backwards to an optimal parameter.”

Natural hazards are particularly amenable to this, because there are so many sensors monitoring them. New York’s MTA uses a tidal gauge; satellite images combined with topography might eventually work for flood levels. Wildfires have a distinct burn area regardless of whether your house, specifically, gets destroyed. “What you’re trying to do is say, what level of damage am I going to have, given this trigger?” says Matt Junge, head of property solutions, US and Canada, at Swiss Re, a global reinsurer and disaster information clearinghouse.

The obstacles, then, are “education”—telling people this thing is on sale—and regulation. Outside California, state regulators are still chewing on how and whether to give parametric policies the green light for consumers. They’re new, and bureaucracies are justifiably cautious. But if Jumpstart is successful, Stillwell says it will expand to other states and other perils next year. “You can imagine: summertime, East Coast.” We can indeed imagine. Every season, someone new is thinking about their insurance.