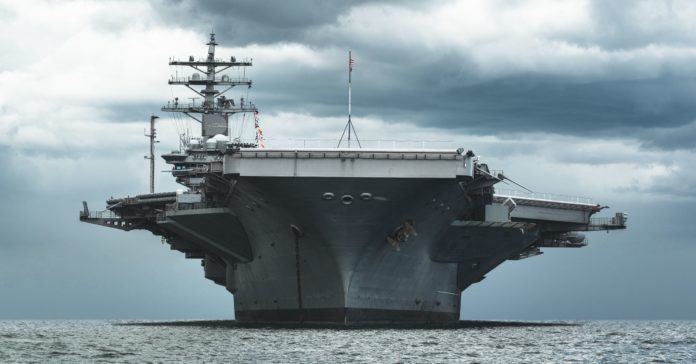 You might think this is a video showing the testing of the electromagnetic catapult system for an aircraft carrier, but you are wrong. No, this is a video of a near-perfect example of a real physics homework problem. Yes, that is what it is.

First, you might ask, what is an electromagnetic catapult? So, you have these planes that need to launch from a very short runway. The runway has to be short enough to fit on a boat. The solution to this short runway problem is the catapult. Traditional catapults are essentially a giant steam-powered piston. Steam pushes this piston which pulls the aircraft up to takeoff speed. The electromagnetic catapult is the same thing, except it uses electromagnets.

Hold onto your seats. I am going to do this as a full physics problem. Yes, there will be math. Math is your friend. Here is the problem.

An 80,000 pound sled is launched from an aircraft carrier with an initial horizontal speed of 180 knots (92.6 m/s). How far does it travel before hitting the water?

Now that’s a great problem. It’s going to be fun to figure this one out. Of course I got the value for the launch speed from the video. But what about the starting height above the water? Don’t I need that for this problem? Usually, yes. But in this case there is another way to finish the problem.

Let’s talk about projectile motion for a second. The projectile part of this motion starts the instant the sled leaves the carrier and ends right before it hits the water. Remember that both the carrier deck and the water would exert a force on the sled. This means that these extra forces mess up the motion to make it “not projectile motion.”

During the projectile part, however, there are two things that must be true. The velocity of the object in the horizontal direction must be constant. It’s constant because there is no horizontal force to change this horizontal velocity. For the vertical direction, the object will have a constant acceleration (of g = 9.8 meters per second squared) due to the downward gravitational force.

For the vertical motion, the object is accelerating downward such that the position can be determined by the following kinematic equation.

What usually happens next is that I take one of these two equations and solve for the time. I can then use that time in the other equation to solve for what I don’t know. If I had the height of the flight deck, I could use that and the vertical motion to find the time it takes to hit the water. This is the same time in the horizontal direction so that I could solve for the distance it hits the water.

There are many options to get this projectile time. You could use the player in Youtube, but it only counts by seconds (not fractions of a second). I like to use Tracker Video Analysis (it’s free). Actually, this is fairly straightforward for a video analysis problem. I don’t need to find the scale of the video, I just need two times. Assuming the video runs in real time (why wouldn’t it), I get a free fall time of 1.968 seconds.

If I put that time into the horizontal motion equation along with the velocity of 92.6 m/s, I get a horizontal distance of 182.2 meters. That is on the order of two football fields long (a football field is 120 yards long). But there is your answer.

Wait! There’s more! Now that I have the time of free fall, I can use this in the vertical motion to find the height of the flight deck. Plugging in my values, I get a height of 19.98 meters (that’s 65.5 feet).

If that’s not enough physics for you, here are some homework questions.