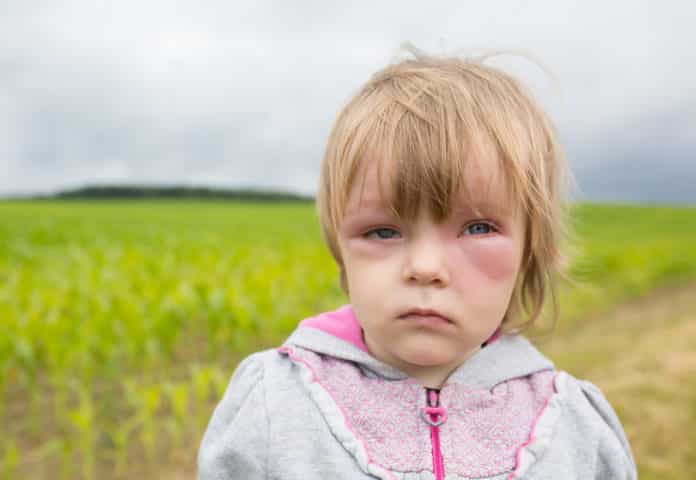 Hives and facial swelling are common allergic responses to food. In the most severe cases, a fatal reaction known as anaphylactic shock can occur. (Credit: Vadim Ratnikov / Shutterstock)

Earlier this year, news broke that 11-year-old Cameron Jean-Pierre of New Jersey suffered a fatal allergic reaction to the smell of fish. His family knew about his fish allergy and took precautions to limit his exposure. But after Jean-Pierre and his father stopped by grandma’s house for a New Year’s Day visit, the boy unexpectedly came into contact with fumes from fish cooking on the stove. Within minutes, Jean-Pierre went into anaphylactic shock, which constricted his airways and caused him to pass out. An ambulance took him to a hospital where he was pronounced dead. It’s believed that the cooking process likely released proteins into the air that triggered the reaction.

It’s a rare case — most accidental allergic reactions occur by ingestion rather than by inhalation. But it’s a tragic example of the real danger that people with food allergies must live with. There is no cure for food allergies or a daily pill one can take to manage the condition. But new research published in Nature Medicine this week is putting the possibility of life changing — and lifesaving — treatments on the horizon.

“None of the other allergic diseases are as acutely and precipitously life threatening … I think that fact has discouraged drug companies from moving into that space,” said Cathryn Nagler, an immunologist at the University of Chicago and senior author of the paper.

The mice included in the study were raised in a sterile, germ-free environment and were fed the same formula as the infants to ensure bacteria colonized properly. Because the mice had no bacteria of their own, they offered a “blank slate” that allowed researchers to study how microbiome composition can affect allergic responses.

The results of the experiment were clear: The microbiome plays a role in determining whether someone develops an allergic reaction to food, Nagler said.

“We showed that the microbiome alone can determine whether or not you get an allergic response,” Nagler said.

The researchers identified a single bacteria species that protects a person from having an allergic reaction to food: Anaerostipes caccae, which belongs to a common class of bacteria known as Clostridia. In a previous study, Nagler and the research team observed that the presence of Clostridia in the gut prevented allergic reactions triggered by nuts. Nagler said the researchers were “overjoyed” to again observe Clostridia’s role in allergy protection — this time to an entirely different food allergen.

The microbiome’s defense mechanisms against food allergens are rooted in butyrate, a short-chain fatty acid produced by the bacteria. Butyrate, which is critical to a healthy microbial community, is currently the focus of new microbiome-based therapies that could treat many common food allergies.

Nagler, who is also the president and co-founder of ClostraBio, a drug development startup backed by the University of Chicago, says the research is already informing the development of bio-therapeutics based on synthetic microbial metabolites. In as little as two years, treatment could advance to the clinical testing phase. If all goes well, a drug could hit the market in five years, Nagler said.

“I don’t remember anyone in my childhood ever dying from a peanut butter sandwich. There were no peanut-free tables. We ate peanut butter and jelly every day. This increase is without question real,” Nagler said.

Because there is currently no treatment for food allergies, sufferers must strictly avoid the allergen, which can be difficult. Common food allergens – like milk, nuts, or soy — are everywhere. Exposure to food allergens can cause digestive problems, hives, and swollen airways. In severe cases, life-threatening anaphylaxis can strike. Once anaphylaxis has started, the sufferers’ only hope may only be an epinephrine injection and timely medical intervention. Allergic reactions to food can be unpredictable — a food that triggered mild symptoms on one occasion may cause more severe symptoms in the future.

About 90 percent of allergic reactions come from just eight foods: Milk, eggs, peanuts, tree nuts, soy, wheat, fish, and shellfish. Although researchers don’t know for sure why the world is becoming more allergic to food, they believe modern lifestyles have altered our internal bacterial communities. The paper says the “misuse of antibiotics, dietary changes, and higher rates of Caesarean birth and formula feeding” are some of the culprits that may be changing our microbiomes and fueling what could be considered a food allergy epidemic.

Perhaps what’s making the battle against food allergies all the more difficult is that the presentation of the condition has changed in recent years.

“Allergies that used to resolve between two-to-five years of age now continue into adulthood. Adults are appearing with allergies that they didn’t have previously, and then there’s an increasing prevalence of life-threatening anaphylactic response.”

However, for the millions of allergy sufferers out there, there’s new hope for relief.

“The microbiome is the new frontier in science and medicine. We have at least as many microbes living in our bodies as we do cells, if not more. They control every aspect of our physiology and control our response to drugs. Understanding how they interact with us are going to be key to the medicines of the future,” Nagler said.