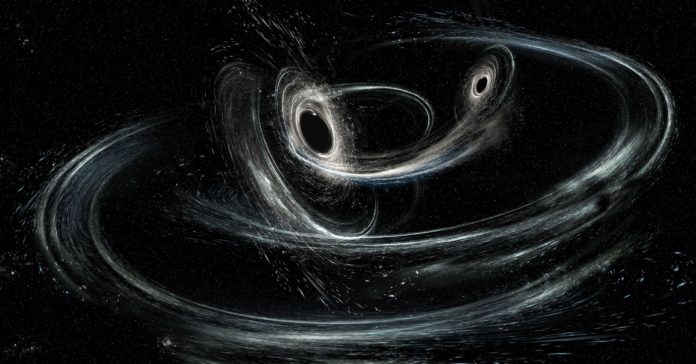 In the sprawling concert venue that is our universe, black holes often collide to produce cosmic cymbal crashes known as a gravitational waves. These collisions, along with other astronomical activity that generates these spacetime disturbances, occur frequently enough that a wave should be rippling through some part of the universe at any given moment. But because the waves quiet to a murmur by the time they reach Earth, astrophysicists only managed to hear their first one in 2015.

After researchers figured out how to listen, though, they made progress quickly. By the end of last year, their miles-long L-shaped detectors, located in Washington, Louisiana, and Italy, had picked up 11 gravitational waves in total. A decade or so from now, they’re hoping to detect about one gravitational wave per day. “We’re transitioning to the goal we originally had 30 years ago,” says physicist Fred Raab of Caltech, a member of the Laser Interferometer Gravitational Wave Observatory (LIGO), which detected the first gravitational wave in 2015. “We didn’t want to just discover one. We wanted to make measuring these things a routine tool.”

Their plans have begun to crystallize: Last Thursday, researchers affiliated with LIGO announced they’d secured a key piece of funding for upgrading their instruments. The National Science Foundation and its British analogue, UK Research and Innovation, have together promised them $35 million. These new funds, along with several international efforts to build more detectors, mean the scientists should be on track to drown in data in the next decade.

LIGO plans to use the money to upgrade their Washington and Louisiana detectors into a new iteration, called Advanced LIGO Plus. LIGO senses gravitational waves by combining multiple infrared laser beams along their detectors’ L-shaped arms. Patterns in the laser beam change if a gravitational wave ripples through the arms to warp their length. But to make them even more precise, the LIGO team plans to control quantum properties of the laser light waves in a process known as “light squeezing.” These new detectors should be able to listen for rumblings in a volume of space five times bigger than before.

Another strategy to collect more signals is to build more observatories. Detectors in different locations that register the same signal help the researchers confirm that it’s from a gravitational wave. In addition, more detectors provide more coverage of the universe. Depending on how its builders orient its L-shaped arms, a detector becomes sensitive to gravitational waves coming from a particular direction. Multiple detectors also allow the researchers to eke more information out of the data. For example, multiple signals of the same gravitational wave allow you to pinpoint more precisely where it originated, much like GPS uses multiple satellites to locate your position, says Jo van den Brand of VU Amsterdam, who leads an Italy-based gravitational wave observatory known as Virgo.

Currently, three detectors exist in the world: LIGO’s two detectors and Virgo. But another one is soon coming online: Astrophysicists are about to test a new gravitational wave observatory, called KAGRA, located inside a cave about 200 miles west of Tokyo. They’re unveiling a new technology—mirrors cooled to about 20 degrees above absolute zero—that gravitational wave researchers think could be crucial to all future detectors. They plan to start observing in the fall of 2019, says physicist Takaaki Kajita of the University of Tokyo, who leads the collaboration.

LIGO has also begun constructing another gravitational wave observatory about 300 miles east of Mumbai, India, which is expected to go live in 2025. The team started planning this site as early as 2010, Raab says, and built most of the India detector at the same time as the Louisiana and Washington ones in anticipation of a future third facility abroad. Now that detector’s time seems to have arrived: Raab is currently figuring out how to ship “a few buildings’ worth” of some hundreds of thousands of lasers, photodiodes, mirrors, and loose components from Washington to India. When built, it should be nearly identical to LIGO’s observatories in the US.

These international teams will collaborate to squeeze the most science out of their signals. Members of LIGO and Virgo meet regularly already and have even merged their data analysis teams, and as soon as the Japanese detector demonstrates enough sensitivity, they plan to join.

Collectively, they’re working toward a swift protocol for alerting the community to interesting signals, Raab says. They hope to reach a point where a gravitational wave passing through Earth will get picked up by one detector, then the next, and then a third, all milliseconds apart. They’d feed these signals into an automated system for flagging false positives. Once the signal passes the test, within a minute the automated system would alert observatories around the world to look for the visual origins of the gravitational wave. They’d swivel their telescopes to watch—and try to catch the universe in action.