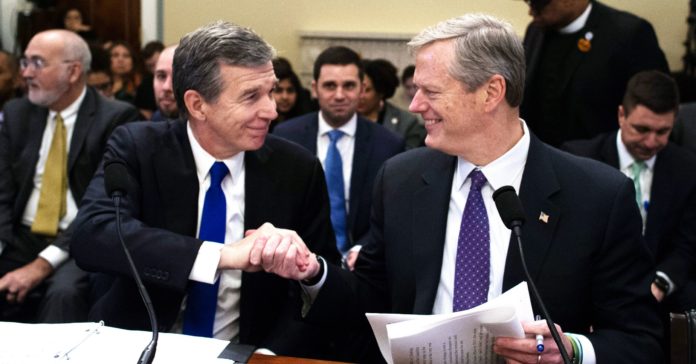 Climate science made a big comeback on Capitol Hill yesterday, with two separate hearings underway on the same day that the National Oceanic and Atmospheric Administration declared 2018 the fourth-hottest year on record and revealed that climate-related weather events caused $91 billion in damages to the US economy.

The last time that climate change was discussed by Congress in a serious way was back in 2010, during the final days of Democratic control of the House of Representatives. But unlike those years-ago hearings, what distinguished Wednesday’s events in Washington was that accepted climate science was front and center: There was no disputing the fact that Earth’s climate is rapidly changing and that human activity is to blame. The governors of two states showed up to urge members of Congress to take the issue seriously. Meanwhile, the climate skepticism—and sometimes outright denial—that has dominated congressional hearings for the past decade was presented as a minority view, as it is among the scientific community.

This shift was best illustrated by the witness list and the testimony from two former colleagues at Georgia Tech’s Department of Earth and Atmospheric Sciences: Kim Cobb, an active climate scientist, and her former department chair, Judith Curry, a scientist who left academia after embracing climate skepticism.

Cobb has spent the past two decades researching the effects of climate change and El Niño events on coral reefs around the world. She’s also linked climate warming to the decline of some kinds of reefs that aren’t able to protect themselves against the double-whammy of warmer waters and increasingly acidic oceans. On Wednesday she made her case to the House Natural Resources Committee that the Earth’s alarm bells are ringing, describing how in 2016 the Pacific Ocean El Niño wiped out 90 percent of the corals in her study site. “I had a front-row seat to the carnage,” she said.

Cobb said she spoke for scientists across the country who are ready to work with lawmakers on drafting policies that use science and evidence to prepare for the effects of climate change and the extreme weather that is increasing as a result. Her testimony was reinforced by new analyses issued today by NOAA and NASA documenting 14 separate weather events in 2018 that caused more than $1 billion in damages, including the California wildfires, droughts, and coastal storms.

Since the 1880s, the average global surface temperature has risen about 2 degrees Fahrenheit (1 degree Celsius). This warming has been driven in large part by increased emissions into the atmosphere of carbon dioxide and other greenhouse gases caused by human activities, according to Gavin Schmidt, director of NASA’s Goddard Institute for Space Studies, which issued the report. But despite the overwhelming scientific consensus on the causes and effects of climate change, skeptics like Curry have found a receptive audience among Republicans on Capitol Hill.

Since 2014, Curry has appeared on Capitol Hill at least a half-dozen times before Republican-held House committees, testifying that the future effects of climate change are both exaggerated and unknowable. The vast majority of climate scientists, however, say their understanding of climate change is the result of current Earth observations, climate records from Earth’s prehistory, and climate computer models that are run numerous times using various scenarios of future CO2 emissions.

At the same time, Curry maintains a blog in which she has criticized funding agencies and scientific journals for being politicized and biased against scientists who hold her beliefs, leading her to quit her tenured faculty job in 2017. She now runs a climate consulting business for private companies. Curry has testified against President Obama’s climate plan, the UN climate action plan, and other policy proposals to curb carbon dioxide emissions. Her testimony Wednesday was no different. “Man-made climate change is not an existential threat in the 21st century,” Curry told the hearing room. “The perception of a near-term apocalypse has narrowed the policy options.”

In response to questions from representative Tom McClintock (R-California), who represents the fire-ravaged town of Paradise, California, Curry said cold weather kills more people than warm weather. (Um, floods? Hurricanes?) She added that cutting carbon dioxide emissions won’t slow climate warming until the 22nd century, that extreme weather was worse in the 1930s and 1950s, and that shifting to carbon-free renewable energy would be a “cure worse than the disease,” because it would drive up the cost of energy.

These are familiar talking points for Curry in her many appearances before Congress. But this time there were no other climate skeptics to back up her positions or fossil-fuel industry officials to forecast doom and gloom for consumers and homeowners if the lights go out in the wintertime. Curry’s words just hung in the air until freshman representative Joe Neguse (D-Colorado) turned on his mic.

Neguse said he worries about the world he is leaving his five-month old daughter. “One needs to look no further than the IPCC report and a variety of other studies to just see how catastrophic the consequences will be for her generation if we don’t take decisive action and don’t take it now.”

Neguse described how his district—which stretches from the ski slopes of Breckenridge to the headwaters of the Colorado River—is suffering from more rapid spring snowmelt, which causes flooding and erosion to farmlands, as well as shifts in the communities of plants and animals in Rocky Mountain National Park. “We are feeling the effects of climate change already,” he told Curry.

Republican governor Charlie Baker of Massachusetts and Democratic governor Roy Cooper of North Carolina told lawmakers how climate change is disrupting their coastlines, and how each state is mandating that utilities generate more electricity from renewable solar and wind power as a way to reduce greenhouse gas emissions. Cooper noted that North Carolina ranks second in the country in solar power generation because of state incentives. “We have grown this solar energy economy to the point where it has political support from both parties because of the jobs it has brought to the area,” Cooper said. “A nudge from state government or federal government can move something in the right direction so it becomes part of the economy.”

But not everyone took the side of mainstream science. During his questioning of Curry, California’s McClintock acted as her helpful anti-climate interlocutor, like a friendly prosecutor to a key witness. He said the Earth’s current warming trend is just part of natural variability (a point that Curry agreed with) and that any effort to address it would be erased by more carbon emissions from coal plants in China and India. With the Senate still in Republican hands, it’s likely that any meaningful congressional legislation on climate change (such as a carbon tax) will probably have to wait for a future election.

Still, Democrats aren’t in a waiting mood. Next Tuesday, the House Science Committee has scheduled a hearing titled “The State of Climate Science and Why it Matters,” while a new Select Committee on the Climate Crisis led by Kathy Castor (D-Florida) is hoping “to achieve substantial and permanent reductions in pollution and other activities that contribute to the climate crisis.” Of course, that won’t happen until Republican leaders agree to play along … and assign some members to the committee.

NASA TV to Air US Spacewalk, Briefing on Installation of Space...

The First Murder Case to Use Family Tree Forensics Goes to...

Cootek, the Chinese maker of TouchPal keyboard, files for $100M US...