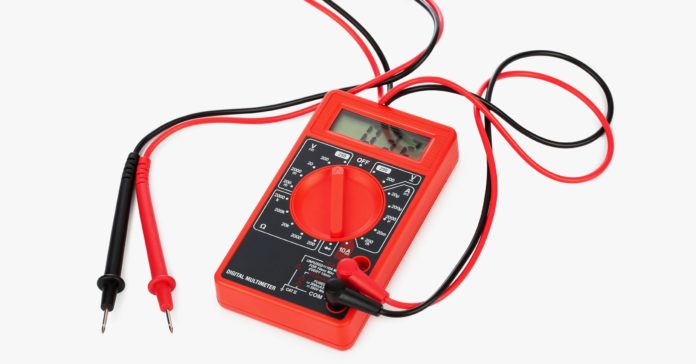 The first time I used a multimeter was in my younger years. I was really into remote-controlled cars—but you couldn’t just buy one and start driving. You had to buy a kit and a controller separately and put the whole thing together. My car was powered by a battery and an electric motor instead of the more complicated gas-powered ones. So whenever things weren’t working, I had to figure out how to use a multimeter to measure the voltage at different points in the car.

Of course there are many other times the multimeter came in handy, but let’s just say that it’s a great tool. We also use the multimeter in introductory physics labs. Many students have zero experience with these devices, but that’s OK. I’m going to give you (and them) a super basic introduction to measuring electric current and the electric potential difference (usually called “voltage”).

Let’s start with the simplest circuit. A battery, two wires, and a light bulb.

You also need to be sure you use the correct settings and the correct plugs. Most multimeters will have a switch to put it in “ammeter” mode and special plugs to measure the electric current. Here, check out this extremely old analog meter (which is awesome) next to a modern digital multimeter.

Notice that both of these use the same plugs for voltage and current, but you still need to have the setting on something that reads a current. For the old meter on the left, I have it set to a maximum current of 750 milliamps and the digital is at a max current of 200 mAmp.

Now let’s add this to the battery-bulb circuit. Here’s what that looks like.

Let’s follow the wiring to make sure we know what’s going on. Oh, a quick warning. This is an older analog meter. It only measures the electric current in one direction. If you hook it up the wrong way, the needle will get “pegged” at the zero mark—that’s not useful and it could possibly bend the needle. Just be careful.

If you follow the wires for this setup, you can see that the original circuit is still there. The wires from the multimeter don’t have to break up the circuit but are instead just touching the two ends of the bulb. Oh, be sure to switch the multimeter settings to read voltage instead of current.

It’s important to realize that the voltage reading and the current reading are hooked up in different ways. In fact, this is the No. 1 mistake that students make when using this instrument. Here’s what happens. They want to measure the current, so they have all the settings and plugs on the multimeter set up for current. Then they touch one wire from the multimeter to one side of the bulb and the other wire to the other side (the way you would use it to measure voltage). Blam-o. You just blew a fuse. Why? With the multimeter set up across the bulb, you have put the meter in parallel with the bulb. Since the ammeter setting has low resistance you get a BUNCH of electric current going through the meter. You are essentially measuring the electric current through a wire with nothing in it. Of course the meter can only handle so much current, so you blow a fuse.

Now the meter doesn’t work. You need to replace the fuse. At least you didn’t mess up the whole multimeter—that would be bad.