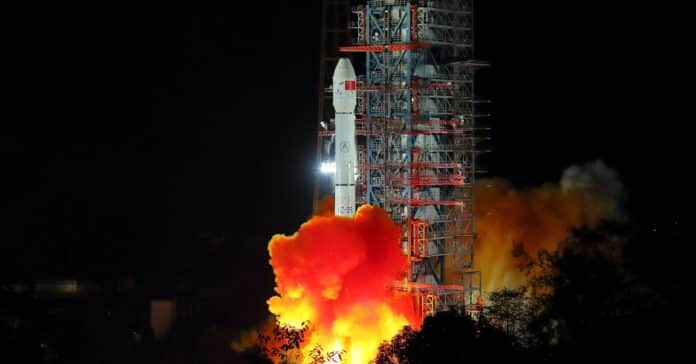 We already know it’s chilly on the moon. A lunar night lasts 14 Earth days, and its temperatures can dip into a cold so punishing it makes the polar vortex look like a hot tub. But yesterday, China’s space agency announced that the frigidity of the lunar night is even more intense than we’d thought: The country’s Chang’e 4 spacecraft recorded an icy low of –310 degrees Fahrenheit (–190 degrees Celsius).

Consisting of a stationary lander and a six-wheeled rover named Yutu-2, Chang’e 4 landed on the far side of the moon earlier this month—a first for any spacecraft. During its first lunar night, Chang’e 4 went into hibernation, relying on internal heat sources to survive.

Its record-breaking temperature data hints at some of the differences yet to be discovered between the far and near sides of the moon. “According to the measurements of Chang’e 4, the temperature of the shallow layer of the lunar soil on the far side of the moon is lower than the data obtained by the US Apollo mission on the near side of the moon,” Zhang He, executive director of the Chang’e 4 probe project, told Xinhua. “That’s probably due to the difference in lunar soil composition between the two sides of the moon. We still need more careful analysis.”

According to Chinese officials, Chang’e 4 has already had some success beyond the landing. Earlier this month, an onboard biosphere packed with six different species of plants and organisms—including fruit fly eggs, yeast, and potato, cotton, rapeseed, and Arabidopsis seeds—showed that seeds can germinate on the lunar surface. But the first signs of lunar life were quickly squashed when the lunar night washed over the far side, killing off the sprouts.

With both the lander and rover awake, the rover should soon begin its task of exploring and analyzing the 115-mile-wide Von Kármán crater. Exploring the moon’s far side comes with many challenges: The lunar surface is exposed to more impacts from cosmic debris, so the rover will need to carefully watch the terrain (it has already beamed backed a panorama of its surroundings). It’s also extremely difficult to communicate with spacecraft on the moon’s far side, as our celestial neighbor acts as a natural cosmic shield, blocking all radio signals. To facilitate communications with the ground, the Chinese space agency launched a relay satellite called Queqiao last May, along with two small satellites that will collect science data as well as take photos of the moon. (Only one made it to lunar orbit, however, and it just beamed back a fresh image of the moon.)

This lunar mission is just the latest to highlight China’s ambition of becoming a world leader in space exploration. Last year China led the world in the number of rockets launched, with a record 39 launches compared with the US’s 30. The country is now planning to send up its first sample return mission, dubbed Chang’e 5. The spacecraft is expected to touch down in a previously unexplored area of the Moon’s Rümker region in the northern Oceanus Procellarum later this year, where it will collect samples to send back to Earth. If successful, it will be the first mission to bring back bits of the moon since the Soviet Union’s Luna 24 probe did so in 1976. The region is a valuable scientific target as it’s thought to contain some of the youngest material on the Moon, and could hold insights to the moon’s volcanic activity.

After that, China is planning three additional lunar missions, a mission to Mars in 2020, and one to Jupiter by 2030. All of these will demand a bigger rocket than what it’s been using so far. That rocket, the Long March 5, made it debut in 2016, with two successful first flights. But in July 2017, a few months before Chang’e 5 was expected to launch, a Long March 5 exploded shortly after liftoff. Officials determined the incident was caused by an issue with the rocket’s first stage engines, prompting a redesign. After months of delays, China announced this week that the rocket finally has a return-to-flight date. If a launch currently scheduled for July goes off without a hitch, Chang’e 5 will likely follow it into the sky by the end of 2019.

The Long March 5 has the highest payload capacity of any Chinese rocket—around 55,000 pounds to low-Earth orbit. (For comparison, SpaceX’s Falcon Heavy can lift more than twice that amount.) It’s also expected to carry the country’s first interplanetary probe to Mars in 2020, and its lighter counterpart, the Long March 5B, will deposit China’s next space station into orbit. But before China can boldly go, its heavy-lift rocket must prove it’s flight worthy.

GizmoCrazed - September 16, 2011 4
The iPhone 5 rumour mill is producing new and improved rumours with every passing day. The latest rumours suggest that there will be a...

Lifetime Heartbeats For Every Living Creature Average Up To 1 Billion

Instagram's Newest Star Is … a Tree?