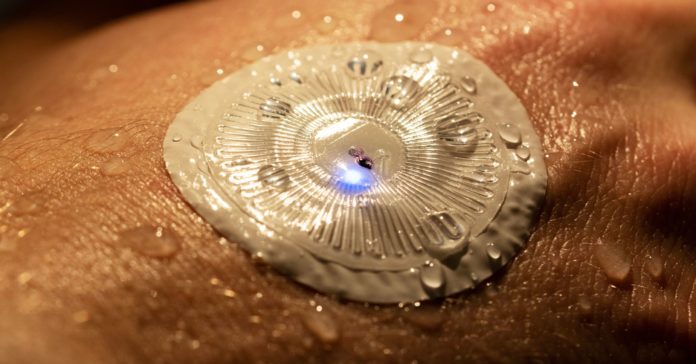 Today a team of researchers announced they have built a small, flexible, wireless sensor that sticks to a swimmer’s skin, allowing athletes to measure how much they need to drink during a workout or race. The device picks up sweat secretions from a person’s skin and channels the fluid into a chemical reagent mixed with food dye. It then turns the patch different colors corresponding to a person’s chloride levels—much like a pH strip for sweat. It also measures body temperature and sweat loss rate.

“You can read out your electrolyte levels by comparing the colors from light pink to dark red,” says John Rogers, one of the authors on the paper and a materials scientist at Northwestern University. “You just eyeball it and you can get a good image of what’s going on.” They published their results in the journal Science Advances.

The key to making this device work was designing it to keep water out while capturing sweat on the inside. Other sorts of sweat sensors either fell off after a short time or were unable to keep the two liquids—pool water outside and sweat inside—apart from each other. To do this, the Northwestern researchers used multiple layers of a flexible soft polymer on top of tiny micro-channels that collect sweat from the surface of the swimmer’s skin. They also ditched the silicone-based polymer that had been used previously in favor of a more impermeable material made of polystyrene-isoprene-styrene, or SIS. A tiny valve system in the sweat collection channels allows the sweat to push out small amounts of air inside the channel without allowing pool water to flow back in. This combination of a new material and novel design worked like a charm, Rogers says.

“It did a pretty good job of keeping water out but allowing sweat to come in,” he says.

The device can also be outfitted with electronics to remotely measure various components of sweat or body temperature and transmit the data to a nearby coach through a wireless chip. Include a tiny LED light, and the patch can alert a swimmer or triathlete when to top up on fluids.

As the sensor’s microfluidic channels change color, they can indicate how much its wearer is sweating.

Rogers has built other devices to measure biological fluids, including one announced at the Consumer Electronics Show with skincare giant L’Oreal that measures skin pH levels to help users determine the best type of makeup or sunscreen to apply. But this is the first device that works underwater.

The project came about after Rogers had a conversation with the coach of the men’s swim team at Northwestern. “The coach was interested in understanding sweat loss and electrolyte loss,” Rogers says. “Dehydration affects performance and can lead to cramping in the pool, but you don’t have any idea how much water you need.”

Rogers and colleagues tested the new device, which is slightly larger than a quarter, on subjects riding an exercise bike, in field trials with swimmers training in the pool and in open water with triathletes training for the Ironman race in Kona, Hawaii. He says the device could also be used in medical settings to test the hydration levels of newborns or elderly patients without having them get on a treadmill. A simple warm bath or shower would be enough to produce sweat that could be collected and analyzed, Rogers says.

One expert says that the new device might be ideal for triathletes who spend several hours exercising during the course of a single event and need to carefully monitor their body over time. “If you want to train better, you want to think about your body as a machine,” says Patricia Christie, head of biology and chemistry at MIT’s Experimental Study Group who teaches a course on the chemistry of sports.

Christie herself trains with competitive triathletes and never quite knows how much to drink before a hard pool workout. She says she has trouble getting her heart rate monitor to work when it gets wet. “I want to fuel my machine and have it tuned up to train the best,” Christie says. “If you collect sweat when you are training, then you can make predictions about what will happen in a race.”