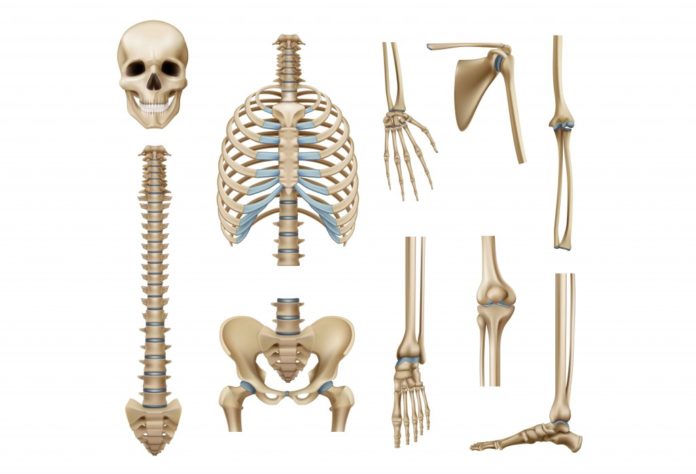 A 17th-century Russian nobleman named Butterlijn had a bone to pick with his surgeon. Butterlijn, the story goes, had been struck in the head with a sword, and his surgeon repaired the injury by transplanting a piece of dog bone into Butterlijn’s skull. He survived, only to be excommunicated by his church because he was deemed no longer fully human. Butterlijn demanded that the surgeon take the dog bone back out; when the surgeon tried, he found that Butterlijn’s skull had regrown around it. By some accounts, it was the first successful bone transplant.

People have been using foreign materials to repair damaged bones for millennia — there’s evidence of patch jobs in Neolithic Peru and ancient Egypt, though they used other materials like gold and iron instead of actual bone. While Butterlijn is the first person we know of to receive an actual donated bone, he was far from the last. Around a million people receive tissues donations every year in the US alone, according to the CDC, including many bone donations — you might know someone who’s walking around with pieces of a dead stranger’s bones somewhere in their body. It just doesn’t get talked about much.

I only found out that bone transplants existed the morning after my dad died, when my mom informed me that she’d agreed to donate the long bones in his arms and legs. It freaked me out. I’m an organ donor, and my dad had gotten a lung transplant before he died, so I know how tissue donations can help to save lives. But bone donation felt more jarring than giving up soft organs like hearts and kidneys. Bones are supposed to stick around for years, “Alas, poor Yorick”-style — they’re the remains that remain. While I knew that his bones weren’t doing my dad any good, I didn’t love the idea of them being anywhere but with him.

So, I did what any normal person processing a loved one’s death would do — I attempted to trace the journey my dad’s bones went on.

The first stop was Gift of Hope Organ & Tissue Donor Network, a non-profit outside Chicago. They’re the folks who helped coordinate my dad’s lung transplant, and they’re also the ones who, a year later, called my mom the night he died and asked if we’d be willing to donate his bones.

“We’re facilitators to get a donor hooked up with a recipient,” explains John Krenn, who’s worked at Gift of Hope for 25 years and helps to facilitate tissue donations. Gift of Hope handles both organs — like hearts and lungs and kidneys — and tissues like bone and tendons.

When someone who’s signed up to be a tissue donor dies, the hospital calls Gift of Hope, which sends over technicians to assess the body. If the body is free of blood-borne diseases like hepatitis C and the bones appear whole and healthy, donor liaisons at Gift of Hope’s 24-hour call center will reach out to the family and get consent for the tissues to be collected. Not everyone says yes; Krenn estimates that for every hundred calls made to potential donor families, only two donations will ultimately be made. 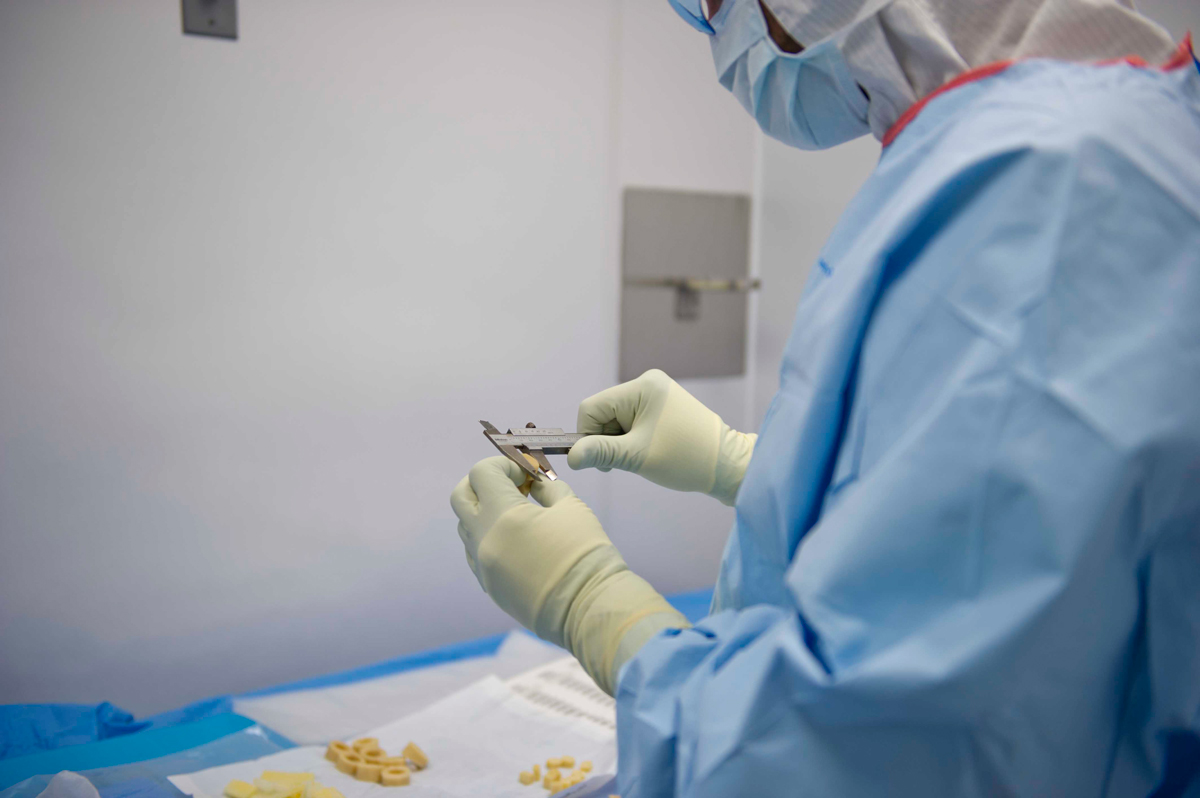 The tissue recovery itself usually take place at the Gift of Hope’s operating room; the bodies await the procedure in a morgue visible through a window by Krenn’s desk. To procure bones from the leg, the technicians open the body along the side, from the waist to the ankle, and peel back the skin to expose the muscle. If they’re also collecting tendons or veins, they take those first, and then, using scalpels and scissors, they free the long bones and remove them whole. After the surgery, the bones are replaced with wooden prosthetics, and the body is cleaned and closed.

But while the bodies go on to funeral homes for their final goodbyes, the bones’ journey is just beginning. On my way out of Gift of Hope, I saw two large packages labeled “DONATED HUMAN TISSUE.” They were bound for the processing center.

Most of the bones from Gift of Hope are sent to AlloSource, a tissue bank that makes bone-based medical products, near Denver. The bones arrive in coolers, packed in ice, and are taken to a cleanroom kept more sterile than a hospital’s operating room. There, technicians in “bunny suits” (hooded coverall jumpsuits and masks) scrape the bones clean of connective tissue and run them through a dishwasher-like machine called AlloTrue to remove any lingering blood and fat before freezing the bones to -80 C. All this is done to ensure that there are no living cells remaining in or on the bones for the transplant recipient to reject.

The prepared bones are put to a variety of uses. Some of the bones remain whole to replace long sections of damaged bone, a technique often used to repair the limbs of children with bone cancer. In those cases, surgeons collaborate with the technicians at AlloSource to find a bone that matches the size of the cancerous section of bone to be removed.

Sometimes, they’ll work with a third-party company to create 3D prints of the bones so they can precisely map out the portions to be replaced, along with plastic guides to show exactly where to cut. But these limb-saving grafts are the exception to the bone bank rule. Instead of staying in one piece, the vast majority of donated bones are ground into putty. 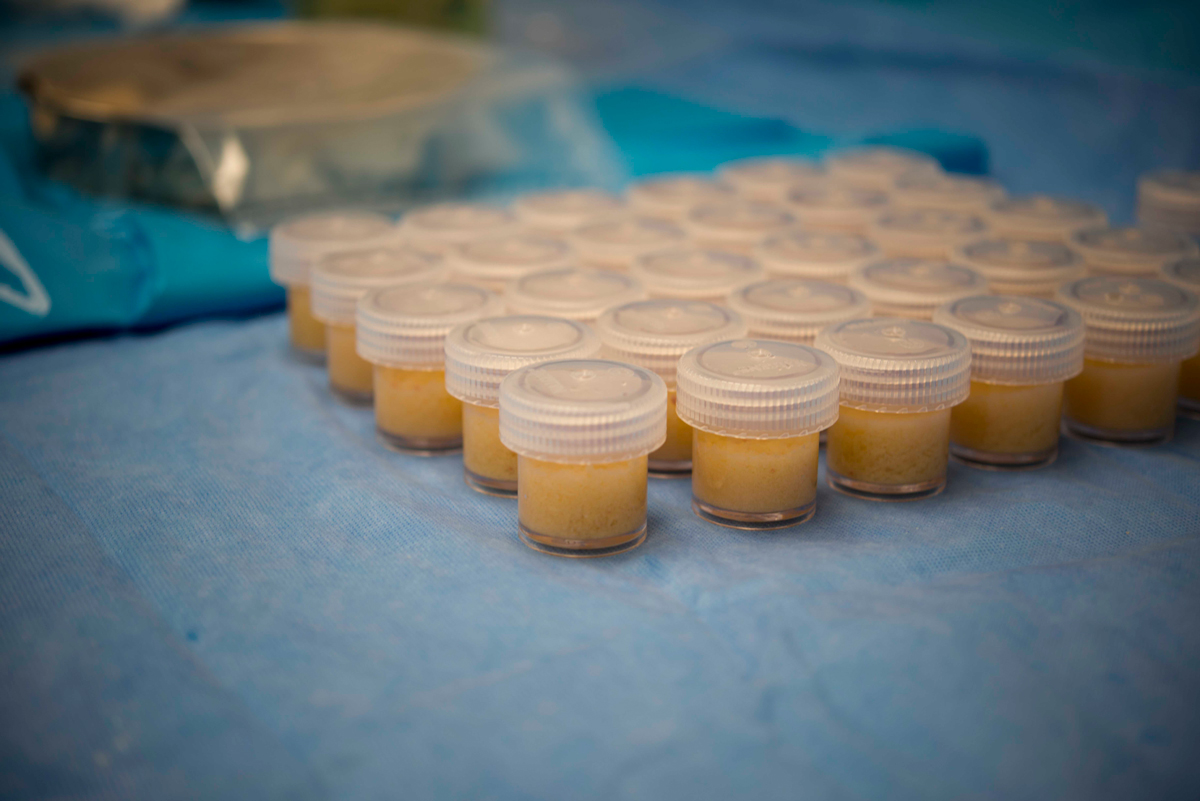 The putty’s official name is demineralized bone matrix, or DBM. To make it, technicians grind up bones and then use acid to remove the calcium. What’s left is a fine, white, Splenda-esque powder, made up of the proteins that stimulate bone growth. These proteins communicate with stem cells, which can divide and replicate themselves into new cells with different functions.

“In the body, stem cells are waiting for a message. They’re like teenagers sitting on a couch, they don’t know what they’re going to do. These proteins are the signal for them to turn into skin cells, brain cells, bone cells,” says Ross Wilkins, an orthopedic surgeon and AlloSource’s chief medical advisor. For easier application, the bone protein powder is mixed into a Plaster of Paris-like putty and then slathered onto bone that needs encouragement to grow.

DBM’s uses are varied, though vital. It plays a role in every bone transplant surgery. Oral surgeons pack it into patients’ degraded jawbones so that the bone regrows enough to support dental implants. It fills in the gaps between vertebrae in spinal fusion surgery to alleviate pain in patients with slipped discs. And when orthopedic surgeons transplant long sections of bone, they paste DBM along the seams of the graft, like frosting joining the walls of a gingerbread house. Steven Gitelis, a surgeon from Rush University who helped found Gift of Hope, describes the donor bone as scaffolding that the live bone “knits” onto, with the help of DBM.

The recovery process for bone transplants can be arduous — for some patients, it’s up to a year before they have full use of their reconstructed limbs. “Dr. Gitelis was very straightforward with me that it’s a complicated surgery and can be a complicated recovery,” says Margaret Bednarowicz, who had 75 percent of her shin replaced with donor bone when she developed cancer of the bone cartilage at 25. “I was game for it because I wanted to try to save my leg.” 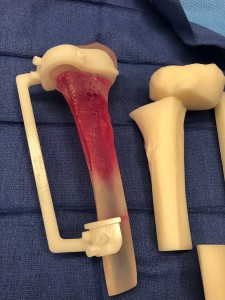 A 3D printed bone of a patient, with the cancerous areas indicated in red, so for the surgeon and bone bank to determine the dimensions of the donor bone needed and the area the surgeon will need to remove from the original bone. (Credit: Dr. Steven Gitelis, Rush University)

Prior to meeting Gitelis, Bednarowicz had been told that her only option was amputation above the knee. Thanks to the transplant, “I was able to return to a sense of normalcy,” she says. “Before the surgery, my tumors caused me so much pain, and with the donor bone, I don’t have any pain.”

And researchers are continuing to find new ways to improve the field: the latest advances include transplanting living cells along with the bone, in the form of live cartilage or stem cells, to help regenerate tissue.

Despite the benefits that transplants can have, the surgeons never lose sight of where the tissues come from. “You have to treat each donor as a sacred gift,” says Wilkins. It’s a sentiment echoed by everyone I talked to: a reverence for the donated bones and the grieving families behind them.

While learning about where my dad’s bones went and how they were likely used brought me some peace of mind, saying that I’m completely fine with it is a lie. Sometimes I feel like if I can’t have my dad, then no one should. Grief can be selfish.

But then, everything we do after someone dies is for the people left behind. When we wash the bodies, light the incense, and dig the graves, it’s for us, not for them. It’s fitting that we try to make something good and useful for the living with the remains of the dead.

Science Isn't About 'the Truth'—It's About Building Models

GizmoCrazed - October 28, 2018 0
You might think you can just leave the science stuff to scientists—but you can't. We live in a world that is surrounded by science...

Back Market raises $48 million for its refurbished device marketplace

California Fires: We Know How to Keep Cities From Burning

Eurovision Winners Give Their Whole Country A Happiness Boost