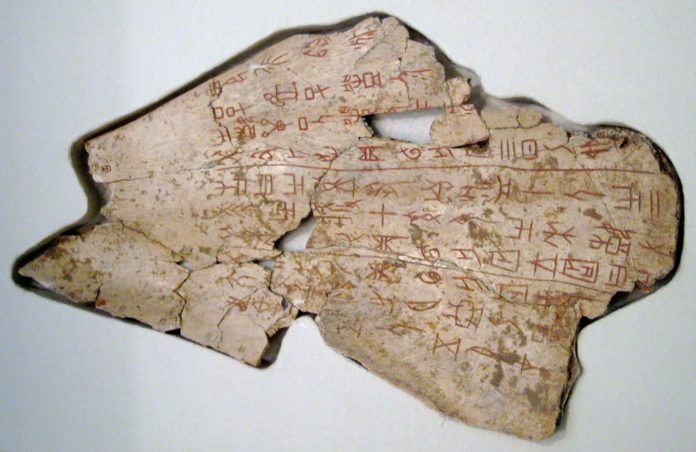 Though we call the last several decades of computational invention the Information Age, we might better look thousands of years in the past to see its true beginnings. That’s when writing, a system that has served as the basis for our collective store of information ever since, began.

This revolutionary idea likely emerged four times in human history: in ancient Mesopotamia, Egypt, China and Mesoamerica. In each case, it seems that people with no prior exposure to writing invented symbolic systems that would eventually transcribe anything that could be said.

My last story discussed how these scripts developed through broadly similar stages. To sum it up in one sentence: the original writing systems began with mostly pictorial characters that resembled their referent, and over time became more efficient and abstract, including a greater number of signs that represented sounds and semantic information.

Although the different scripts followed similar patterns of development, the initial causes and contexts of their inventions differed. Here, let’s delve into those differences.

Shopping Receipts from 3200 BC

What we know about ancient scripts is biased by the durability of various forms of media. Early texts written on perishable materials, like parchment or wood, mostly deteriorated over time. Words carved in clay or stone endured. So, to begin, we must understand that archaeologists are working with an incomplete record.

They’ve made the most progress for Mesopotamia because — conveniently — its earliest texts seem to have been inscribed onto baked clay tablets (chapter 4). 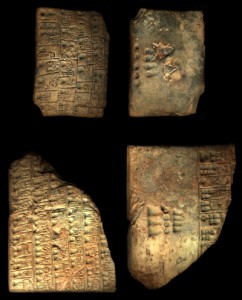 Mesopotamian characters, which first appeared around 3200 BC, had a wedge-like appearance, leading later scholars to call the system cuneiform, after the Latin word cuneus for “wedge.” The earliest-known cuneiform (technically proto-cuneiform) texts were discovered in the temple precinct of Uruk, arguably the world’s first city, on the Euphrates River in present-day Iraq. This is likely where cuneiform originated, and it seems to be a case of necessity being the mother of invention.

In the centuries surrounding the earliest texts (3100-3350 BC), Sumerian-controlled Uruk underwent substantial population growth from about 20,000 to 50,000 residents. Urbanization required sophisticated bookkeeping, so scholars think writing was devised to log transactions of goods and services. Though the idea of representing words with signs was novel, cuneiform built upon earlier methods of record keeping, including numerals, seals of authenticity and tokens, small clay pieces shaped into cones, crescents, and other geometric shapes, likely used for counting commodities during transactions.

Supporting the hypothesis that writing began out of economic necessity: Of the 5,000-plus texts recovered from this period, around 90 percent are administrative receipts and expenditures (chapter 2). They are clay tags or tablets, documenting exchanges of goats, barley and so forth — the hot items of the day. The remaining 10-ish percent of early texts includes scribes’ exercises to learn writing and lexical lists, or glossaries of words organized by theme like professions, animals or cities.

None of the early texts are page-turners (figuratively and literally … they didn’t have pages). That took time. Over the ages, cuneiform expanded beyond its initial accounting purposes and was used for writing letters, history and more. It also spread to other tongues. Cuneiform probably first transcribed Sumerian, the now-lost language spoken in Uruk. But during its 3,000-year existence, the script was adopted by many peoples, including speakers of Akkadian (the earliest written Semitic language, the family that includes Arabic and Hebrew) and Hittite (the earliest written Indo-European language, the family that includes most present-day languages of Europe and southwest Asia).

The impetus for writing is less clear in Egypt, China and Mesoamerica. In these cases the oldest surviving texts, on durable materials, were almost certainly not the first created. Most scholars contend earlier records were made on perishable media, lost to the ages. Their reasoning: The earliest-known examples seem too developed in form and structure to be a society’s first stab at writing. Or they’re too restricted in use to necessitate a full writing system and literate folks to perpetuate it.

But here’s what we’ve got:

In Egypt, the claim of earliest-known texts belongs to about 200 postage-stamp sized tags made of ivory and bone, discovered in the late 1980s in an elite tomb called U-j in Abydos (chapters 5 and 6). Dating to around 3300 BC, the perforated tags were likely attached to commodities, subsequently nabbed by grave robbers. Each tag contained a simple inscription, a few signs resembling people, animals, geographic features, numerals and more. In total, about 50 distinct signs appear. Some are similar enough to classic hieroglyphs of later periods that many researchers accept these tags as early Egyptian writing.

This discovery pushed Egyptian script back two centuries, to about the same time cuneiform emerged. And like Mesopotamia, during this period Egyptian society got more complex. Bureaucratic needs may have stimulated writing in Egypt, but it likely had other uses as well. Given the effort required to produce these fine tags and other early texts, writing may have also served religious or social functions — perhaps to distinguish the elite from commoners.

As for China, the oldest surviving texts are objectively cooler than those from Egypt and Mesopotamia. They come from contexts of divination and ancestor tribute, dating to around 1200 BC at the Anyang site in north China, the capital of the Shang dynasty. The inscriptions adorn bronze vessels containing offerings to deceased ancestors and oracle bones: cracked ox shoulder blades and turtle shells covered with text.

From Anyang, more than 133,000 inscribed oracle bone fragments have been recovered. They were used in divination rituals pertaining to matters such as harvests, birth and war. Royal parties would pose questions to the gods, like “Lady Hao’s childbearing lucky?” or “Week without disaster?” The oracle bones were then fractured; their cracks foretold the answer. Sometime later, scribes would return to the cracked surface and record the question, prognostication and outcome. 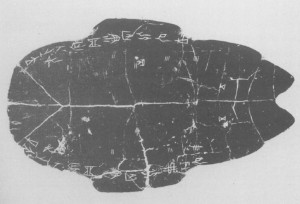 This Anyang writing was fully developed, with about 4000 standardized characters and the capacity to transcribe speech. The oracle bones and vessels would have been seen by few, just members of the royal inner circle. Consequently, scholars doubt this was the first Chinese writing. It was just the first to last.

Finally in Mesoamerica, the earliest surviving texts, which remain undeciphered, were carved onto monuments by the Olmec (roughly 500-900 BC) and Zapotec (by about 500 BC). Due to their rarity, we can’t say much about the origins of writing here. However these systems are thought to have inspired the Maya, whose ancient script is now mostly deciphered. 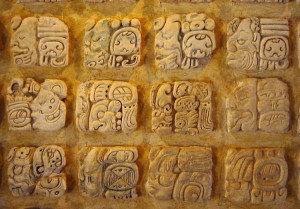 The Classic Maya civilization peaked around 1,500 years ago in the Yucatan region of Mesoamerica. Long before this golden age, the earliest uncontested Maya characters or glyphs appeared around 200-400 BC, carved or painted onto elite structures, including thrones, altars and palace walls, like at San Bartolo, Guatemala. Attempting to emulate their powerful, literate predecessors, Maya elite may have developed writing to adorn their buildings and goods as a status symbol. But then again, this view may be a consequence of preservation. If texts on perishable materials, like palm leaves, survived we would have a better understanding of the origins of Maya script and its antecedents.

There’s a lesson here for writers dreaming of achieving immortality through their work: Whatever you write about, what you write on matters too.

What We Know About the Causes and Symptoms of ADHD