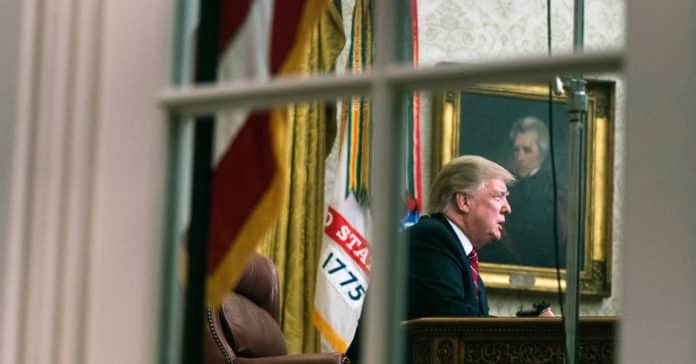 When President Trump first announced he would deliver a primetime address about the border wall, people objected. They argued that the networks shouldn’t run it, given Trump’s record of lying about immigration issues and the precedent of not airing presidential speeches deemed purely political. Misinformation experts warned that if news organizations do air the speech, they should fact-check it live. Now that it’s aired, what ultimately changed?

Senior advisor Jared Kushner apparently assured congress that popular support for the wall would grow. Political scientists countered that the far more likely result would be firing up Trump’s opponents while not changing the general public’s mind much at all. The other result, according to social science, will be to hijack your attention for days.

The way that the news media and social media users respond to Trump’s words, paired with the network effects of the internet, will keep the topic in the national discourse until some new shiny object comes along to divert everyone. “Research shows that speeches like this don’t tend to move public opinion. What they are effective at is diverting the attention of the media,” says Dartmouth political scientist Brendan Nyhan.

One person who appears to understand this consensus scientific view is Trump himself. Hours before his approximately 10-minute speech aired on every network in primetime, he reportedly told a group of network anchors that he knew the speech was pointless. “It’s not going to change a damn thing, but I’m still doing it,” the New York Times reports Trump saying. He said he only agreed to it because his media team insisted it was worth it.

Recent research by Stanford political scientists suggests that a direct policy plea’s main outcome is a strong uptick in news coverage about the policy for two to three days. If the goal of the communications team is to keep the media talking about an issue on the president’s terms—reacting to his framing of an issue, rather than framing it themselves (excuse me, ourselves)—then perhaps Trump’s communications team is right.

This hijacked conversation poses a risk to an informed populace. Not because the border wall is inherently good or bad, but because much of the information Trump shared in his speech to justify the wall was misleading or outright false. In her report “Oxygen of Amplification,” the Syracuse University researcher Whitney Phillips spelled out the ways in which the participatory nature of the internet traps the traditional news media in a cycle of spreading falsehood and partisanship.

The biggest effect of last night’s speech, in Phillips’ estimation, is the way in which it further made casually xenophobic language an acceptable part of national discussion. The underlying fear-mongering of much of Trump’s speech was inherently dehumanizing, as Phillips puts it. “Just having that message forwarded in such a public platform, the most public platform you could possibly imagine,” she says, sends the message that racist ideas are just “another night in America.”

In the wake of the 2016 election and its coordinated misinformation campaigns, the rules for how journalism should treat incendiary, polemic topics are being rewritten. Phillips argues for something called strategic silence: the decision to not produce a news report about something that appears to be spreading powerful rhetoric without inherent news value. That’s the case people tried to make when arguing that the networks should not air Trump’s speech.

In Phillips’ view, there was nothing newsworthy about this speech. She was at the airport in the hours leading up the speech, delayed at customs because of a lack of TSA personnel owing to the shutdown. In that context, she watched CNN’s ticker countdown to the speech while overhearing people discuss the real-world ramifications of the shutdown. Those impacts, she says, are the real story, and are profoundly newsworthy. “But that particular speech was pointless,” she says.

There is precedent for not running such an address. In 2014, the networks declined to air a speech by then-President Obama introducing the expansion of DACA reform, on the grounds that the speech was purely political. In last night’s address, Trump didn’t introduce any new policy, and the speech was arguably purely political, but the networks ran it.

Some news organizations attempted to preemptively fact-check the speech. Before the address, the Washington Post ran a cheat sheet of 20 false statements the president might say. By minute four, the president had uttered most of them. Prescient and useful reporting, but Nyhan points out that the people most likely to read such a story are news junkies who probably already made up their minds. Research suggests that partisans know a lot of facts that conform to their worldview, and fewer facts that challenge it—especially when it comes to heavily covered issues like immigration.

Phillips agrees. “[Fact checking] is never going to reach the intended audience. You are providing fact checks to an audience that already agrees,” she says.

Even if such a cheat sheet were read by the people who favor a border wall and fear “uncontrolled illegal migration,” as Trump put it last night, studies suggest that it would have little impact on their policy positions. Worse, some studies show that fact-checking—especially when undertaken “uncongenially” or with a snarky attitude (not that WaPo’s was)—can backfire, and actually drive partisans to believe the mistruth even more.

Even if fact-checking can on occasion correct false beliefs, its overall impact is likely to be low. In research forthcoming in the journal Political Behavior, Nyhan and coauthors report that individual fact-checks can work: both Democrats and Republicans are willing to accept new information that goes counter to their own incorrect ideas. But they don’t end up changing which policies and candidates they support. “Factual corrections can achieve the limited objective of creating a more informed citizenry but struggle to change citizens’ minds about whom to support,” they write. Other research backs up this finding.

So all the attempts to fact-check Trump’s misstatements about illegal immigrants violently murdering lots of Americans are unlikely to reach their target audience, and even if they do, the individuals who believe him probably won’t change their minds about a border wall.

In other words, it won’t change a damn thing. But people will keep talking about it for days to come.