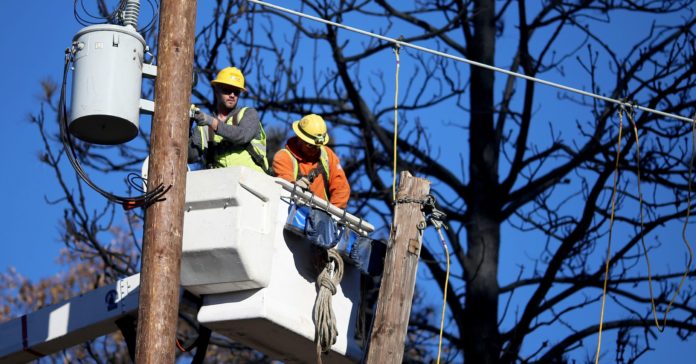 Actions have consequences, as our parents likely told us as kids. But inaction has consequences, too. Life or death consequences, in the case of California’s new normal of massive, climate-change-driven wildfires.

After a series of devastating fires over the last few years, critics have turned their ire toward PG&E, a utility that brings electricity to 5.4 million households and businesses in Northern California. Its equipment has been blamed for 17 of 21 major fires in 2017 alone. Facing the prospect that it’ll be officially implicated in last November’s Camp Fire, which virtually destroyed the town of Paradise and killed 86, the utility has announced that it’s seeking bankruptcy protection.

What happens to PG&E next—whether it sells off bits of the business to survive, or the state forces the company to split up, or it’s turned into a public utility—isn’t clear. But safety will haunt the utility no matter what. “They have a failed track record,” says California State Senator Jerry Hill. “They have no safety culture today.”

Preventing electrical equipment from sparking fires is not some arcane art. But it does have its complications, and forcing a utility to get its act together might require forceful regulation of the kind typically reserved for a railroad baron.

The biggest threat to the electric grid is wind. In California this becomes particularly problematic in the fall, when seasonal winds tear in from the east. These winds are hot and dry, and desiccate the vegetation, making ignition all but certain.

“High wind not only makes the fire spread very fast, but it also knocks all those power lines and knocks all the equipment, which can generate explosions of sparks, whether that’s arcing between lines or transformers exploding,” says Michael Gollner, a fire protection engineer at the University of Maryland. “It’s almost always due to either collapse of power utility poles or contact between different lines.”

Those complications aren’t necessarily a problem if the equipment is surrounded by pavement. But miles upon miles of power lines are strung through the wildlands of California, where they are surrounded by unkempt brush.

Even before these seasonal winds arrive, the lines are a major liability. “We hit these really, really dry periods throughout the west in the summertime,” says fire ecologist Robert Gray. That means a whole lot of air conditioners running. “There’s more juice running through the line and it sags closer to lower vegetation.”

One fix is to bury the lines, but that doesn’t work in much of California, where a lot of rock sits at the surface. You could do it, but it would be enormously expensive. Even if lines were buried where there’s dirt, digging them up to do repairs is still pricey.

Then why don’t utilities just cut power to lines when they know strong winds are coming? They do, actually, but that call is far from simple. “You also cut off certain communities from vital services,” says Gollner. “You can turn off medical equipment—there’s all sorts of things to consider when you make those decisions. They have to weigh both liabilities, which is bizarre.”

The best thing to do now, experts say, is to take a page from the era of railroad barons and rein in the utilities. From the 19th century well into the 1920s, America had a serious problem with railway fires. Burning coal or wood threw sparks out of the engine, which easily ignited vegetation around the tracks. It was like dragging a flare across the countryside.

Then regulators said: Yeah, that’s going to have to stop. They made the railroads adopt spark arrestors. “They required inspections for brakes,” says wildfire historian Stephen Pyne. “There were laws passed.”

Regulators dragged the railroads into court if they didn’t comply. “A century ago, this was a huge industry, big money, big political clout,” says Pyne. “That’s not unlike the power line situation.”

First and foremost: lines simply have to be kept away from brush. That means a whole lot of money spent in fuel management, which California has been historically terrible at. In California, utilities are legally liable for any fire their equipment starts, even if they aren’t deemed to be negligent, so they better be damn sure that that equipment is clear of brush. That costs money, but it’s a tiny investment compared to paying for the ravages of wildfires—PG&E says it’s facing a liability of $30 billion from just two years’ worth of conflagrations. Hence bankruptcy.

(PG&E declined to comment for this story, pointing instead to a press release that says it will “make investments in system safety as it works with regulators, policymakers and other key stakeholders to consider a range of alternatives to provide for the safe delivery of natural gas and electric service for the long-term in an environment that continues to be challenged by climate change.”)

Utilities know full well how to manage their risk. Both Pyne and Hill point to San Diego Gas & Electric, which regulators found liable for the Witch Fire of 2007, as a model of current safety practices. For instance, it created a weather center that monitors for fire conditions. “They created a new industry standard that has been ignored by PG&E almost in every regard,” says Hill. “Ignoring those basic practices I believe resulted in the fires of 2017 and 2018.”

In the long term, though, the solution may be for communities to become more independent about their power. It’s not hard to foresee a future (however far off) in which electricity is much more decentralized: Instead of power coming from massive plants dotted throughout California, neighborhoods could establish their own hubs, using solar or wind power to charge large batteries throughout town. Outfitting your home with solar panels still ain’t exactly cheap, sure, but that price will continue to drop as the technology evolves. And decentralization in California very much depends on PG&E’s fate: If the state ends up breaking the utility into smaller entities, that might make things easier.

“It’s burying lines where we can, where it’s feasible and appropriate,” says Gray. “It’s decentralizing the hub so if you do have a power outage it doesn’t impact huge areas. But it’s also a system that uses a multitude of different sources of energy.”

This is scary new era of climate-change-driven wildfires. But by reining in the utilities, just as we reined in the once-almighty railroads, perhaps we can help avoid catastrophes like Paradise.

New Tech Converts Thoughts to Speech, Could Give Voice to the...

The Supply Chain: An Inside Glimpse at the Tech Powering Global...

How An LCD Monitor Works? [VIDEO]