Imagine this: you’ve just fled from the city to your nearest national park to gaze deeply into the infinite abyss of space and contemplate how your own existence fits into the curtain of the universe. Then, out of the corner of your eye, you see bright white letters spelling “KFC” spring across the horizon in a long arc. A few minutes later, it’s gone.

That’s the idea behind Orbital Display, a Russian startup’s effort to bring billboard advertisements to low-earth orbit using a grid of tissue box-sized satellites called “CubeSats.” Orbiting approximately 280 miles above ground, these tiny satellites will unfurl Mylar sails some 30 feet in diameter to catch and reflect sunlight, creating a pixelated matrix. The company, StartRocket, has proposed using this tech to display a knockoff of the Coca-Cola logo and other brand emblems, as well as allow governments to flash urgent notifications during emergencies.

Vladilen Sitnikov, StartRocket’s CEO, describes himself as an advertising guy with a “crazy idea.” He approached SkolTech, a private university in Moscow, to figure out the technical details, contracting a team of engineers to develop a prototype. Their first test launch could happen this summer, with a full execution in 2021. That is, if the company can find the money.

“It’s human nature to advertise everything … Brands [are] a beautiful part of humankind,” Sitnikov says in a video call. He compares his efforts to Elon Musk and SpaceX, who last year launched a Tesla into space, which many considered an advertisement. Sitnikov also compared Orbital Display to banner-towing airplanes.

But the idea, unsurprisingly, attracts negative reactions from astronomers and other dark-sky advocates who fear adding more light pollution to the heavens would cause significant problems. However, those I spoke with unanimously felt the project, or something similar, is inevitable. The wait before LED lights and advertisements fill up the night sky may not be long.

A Swarm of Flashing Satellites

Many satellites are already reflective, bouncing flares of light back to earth that are visible for a few seconds. The brightest are Iridium, a constellation of 66 telecommunication satellites tossed into orbit in the ‘90s. If launched, the Orbital Display will be as bright as these — around -8 magnitude. (For reference, the full moon is about -13 and the sun is about -27.)

Like most CubeSats, the billboard will have planned obsolescence and won’t last more than a year, the company says. The Orbital Display will only be viewable in evening and morning twilight, when the cubes catch sunlight while the observer is in darkness, according to Patrick Seitzer, an astronomy professor at the University of Michigan in Ann Arbor.

“You’ll never see them at midnight, for example,” he says in an email. “Depending on the orbit chosen, they might be visible for a few days, and then not visible for a week or more.”

“Launching art projects like this with no commercial, scientific, or national security value seems unwise,” adds Seitzer, who has been studying space debris since 2000. “Space is getting increasingly crowded. There are over 20,000 objects with orbits in the official public catalog maintained by the U.S. Air Force. Less than 10 percent of those objects are active satellites — the rest are dead satellites, old rocket bodies and parts of spacecraft.”

Astronomer John Barentine agrees this isn’t a bright idea — or actually, bright is the problem. Barentine serves as both director of conservation for the International Dark-Sky Association in Tucson, Arizona, and a member of the American Astronomical Society’s Committee on Light Pollution, Radio Interference and Space Debris. He says these space billboards could qualify as both light pollution and space debris and possibly even disrupt radio signals.

“It’s a threat to the ability to do astronomical research from the ground,” he says, noting that SpaceX’s plans to add at least another 7,500 CubeSats into low-earth orbit will also factor into the problem. “Every one of those moving blips of light in the night sky is something that can interfere with our ability to collect photons from astronomical sources.”

But Sitnikov insists his display’s orbit is so short it’s negligible for observing. “It’s just six minutes,” he says. “You can do peeing or making your coffee. So it’s a break for you, it’s like we [are] help[ing] them.”

Others see this as adding to the growing health problems caused by light pollution. Harun Mehmedinović, a cinematographer specializing in night sky exposures, emphasizes the effect light pollution has on human mental health, but also the impact it has on plants and animals.

“We have a heritage and I think a long-standing relationship with the pristine night sky, which I think is important to us as people,” he says, arguing that without the night sky, humans wouldn’t have developed science or religion. “The two big dominant forces wouldn’t exist without stargazing — they ultimately are rooted in celestial observation.” 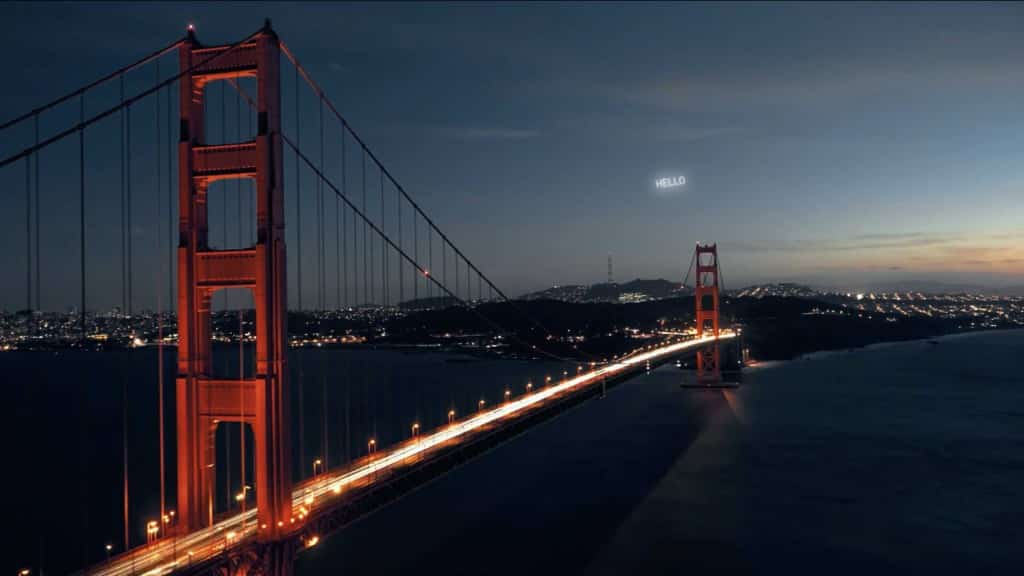 Fake Suns From Past To Present

Space mirrors actually aren’t so original. A province in China recently proposed installing an artificial moon as a replacement for streetlights, although the project never materialized. A large disco ball called Humanity Star, launched by Rocket Lab a year ago for no other purpose than to shine brightly as it flew by, angered some who labeled it environmental vandalism. It eventually burnt out in the atmosphere.

In 1923, the German physicist Hermann Oberth proposed putting a 100-meter wide mirror into space to ricochet concentrated sunlight down on the globe. The so-called “sun gun” was later adopted by the Third Reich, but never made it off the drawing board.

Russian engineers revisited the idea in 1993 (although as a method of focusing light into polar regions, not as a weapon) with Znamya, a disk of aluminum-coated plastic film 65 feet in diameter. The first successfully splashed sunlight down to astronomers in the Alps, but the second experiment was a dismal failure.

That raises the question if this tech is even feasible or if it’s just a PR stunt. “There are a number of technical issues regarding keeping the CubeSats in formation,” Seitzer says. “Active propulsion will be necessary. The large Mylar sails will be effective as drag sails, and thus the CubeSats will decay from orbit in a short time. Thus one has to constantly replenish the constellation.”

But, the company says they’ve solved these technical problems. Furthermore, as StartRocket emphasizes in their PR material, there are currently no laws against their ambitions. The Federal Communications Commission recently proposed updates to mitigating orbital debris, but they aren’t law yet, and don’t address advertising. In other words, looking up and seeing an Orbital Display may only be a matter of time, Barentine says.

“There’s not a lot that can be done other than heaping scorn upon the companies that might advertise with the satellite owners,” he says, but as for him and the International Dark-Sky Association, “We are going to continue to be advocates for a night sky that is free of this kind of activity and remains as accessible to all humanity as possible.”

Top 10 Most Iconic Photos Ever Taken

GizmoCrazed - September 7, 2011 1
There were some great, and some bad moments in history that were caught on camera. Here's our list of Top 10 Most Iconic Photos...

There’s a Metabolic Limit on How Much Energy We Have for...