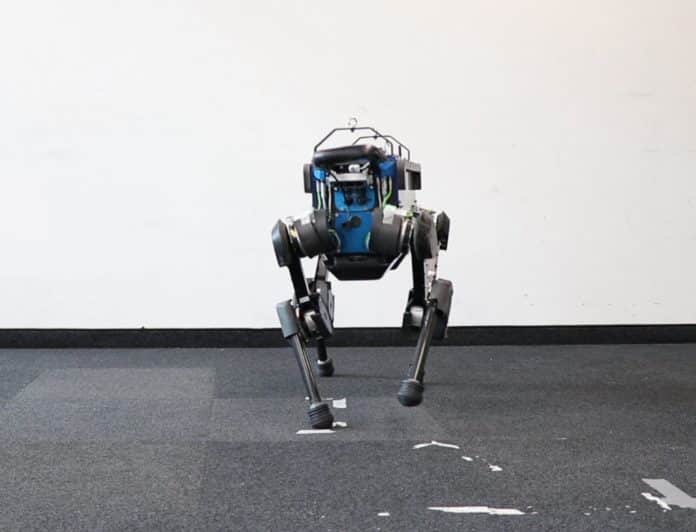 ANYmal walks like a dog and looks like a dog thanks to its extensive, computerized dog-training courses. (Credit: Hwangbo et al., Sci. Robot. 4, eaau5872 (2019))

Now that’s a headline, right? It’s got a robot dog, plays off a well-known phrase and piques curiosity. Best of all: It’s also accurate! Sort of.

According to a paper today in Science Robotics, an international team of engineers created a way for legged robots — inspired by and physically similar to quadrupedal canines — to use machine learning techniques to learn better ways to move around and adapt to a given environment. As proof, you can watch one such robot “withstanding abuse from their human creators,” as the official caption describes it.

That’s because the “training sessions,” where the dogs did all their learning, took place within a computer. “We introduce a method for training a neural network policy in simulation,” the authors write, “and transferring it to a state-of-the-art legged system, thereby leveraging fast, automated, and cost-effective data generation schemes.” The artificial intelligence — here applied to a specific dog-sized machine named the ANYmal, but the method should work on any machine — learns all its tricks in the digital world, where there are no complicated and expensive parts to engineer and replace, then shows off its abilities in the real world.

Using this technique, the researchers improve on all previous attempts to manipulate such robots, achieving a new level of control and efficiency. In particular, ANYmal can now run up to 25 percent faster than ever, and it recovers from all fall it experienced in real-world testing. (Hence the abuse, above.)

Despite the Black Mirror comparisons, this stuff is more cool and exciting than depressing and unsettling. The authors themselves point out the promise of such mobile technology: “Legged robots may one day rescue people in forests and mountains, climb stairs to carry payloads in construction sites, inspect unstructured underground tunnels, and explore other planets.”

And because the virtual training regimen — all of which took place on simple personal computers and never exceeded 11 hours — was sped up, running about 1,000 times faster than real-time, this method of learning is cheap and gets results relatively quickly.

Of course, other machines will still need their own training sessions for now, and there are other bugs to work out before the technology can achieve those lofty goals. Still, we now have a robot dog that trained themselves to improve their running form and get back up from any kind of a fall — an uplifting and inspirational message that proves just how unlike Black Mirror this really is.